Must win final game against Evanston to make playoffs

Heading into the final week of the season, the Panther football team will have it all on the line, after the squad dropped a road contest to the Jackson Broncs on Friday 21-17.

Must win final game against Evanston to make playoffs 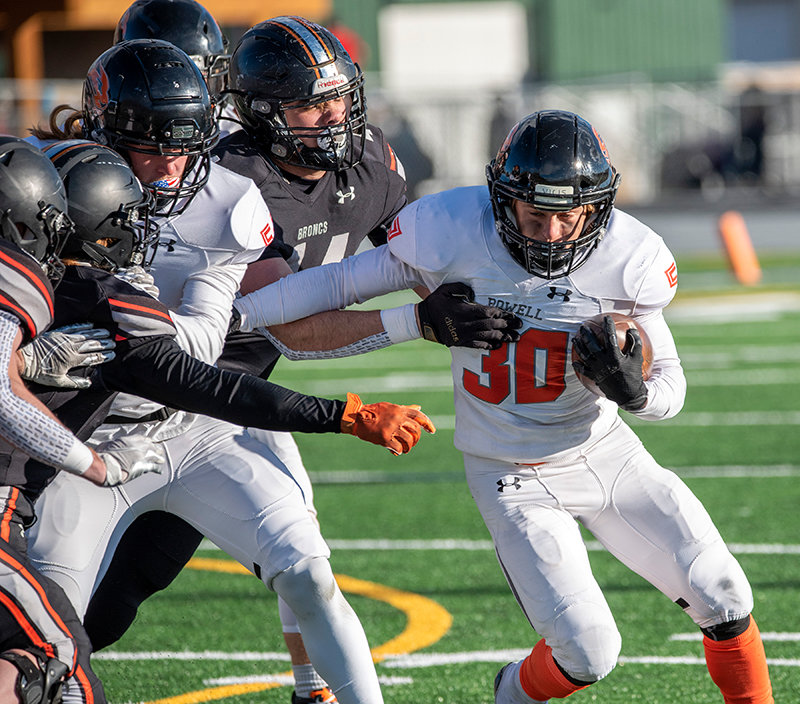 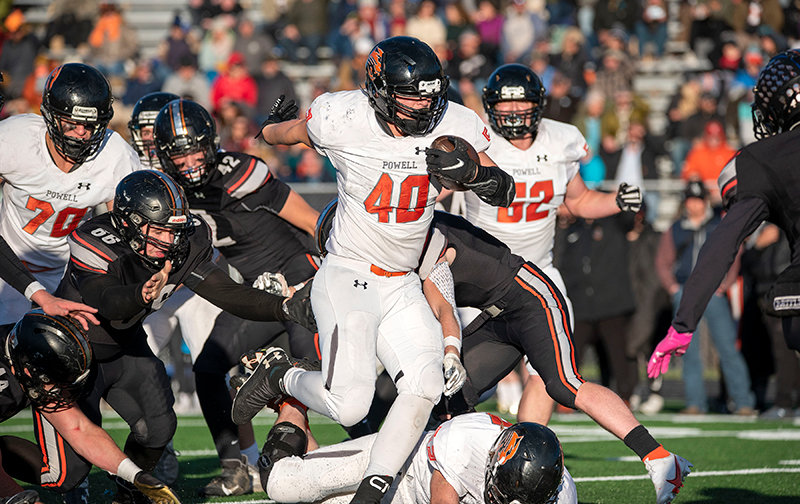 Panther fullback Toran Graham breaks through the line during Friday’s game against Jackson. Graham helped lead the Panthers on the ground to their first touchdown of the game, but Powell fell to Jackson 21-17.
Photo courtesy Brad Boner, Jackson Hole News&Guide
Previous Next
Posted Tuesday, October 19, 2021 8:20 am
By Seth Romsa

Heading into the final week of the season, the Panther football team will have it all on the line, after the squad dropped a road contest to the Jackson Broncs on Friday 21-17.

The game began with multiple three-and-outs by both teams, followed by a Panther fumble.

“We had that turnover and we just made some more minor mistakes,” Powell High School head coach Chase Kistler said.

The Broncs immediately made the Panthers pay for the mistake, throwing a 38-yard strike on the next play. That set Jackson up at the 1-yard line, where Sadler Smith punched it in on a quarterback sneak to put the Broncs up 7-0.

The Panthers responded with a drive down the field, converting on a fourth-and-2 near midfield; they headed into the second quarter looking to find their footing again.

However, the drive stalled around the Broncs’ 45-yard line after Jackson broke up a Panther pass on fourth-and-10. The Broncs appeared to be taking control of the game, but the Panthers soon got a game-changing play: a tipped interception by Hawkin Sweeney put the Panthers in excellent field position at the Jackson 48-yard line.

PHS then drove down the field in just under four minutes, and appeared poised to score a touchdown and tie the game.

However, the Bronc defense stiffened, which forced the Panthers to make another decision on fourth down. Quarterback Jhett Schwahn initially appeared to be lined up to go for it, but the Panthers instead attempted a 22-yard field goal. The kick by Sweeney was blocked, however, and they turned the ball over.

The Panther defense forced a quick three-and-out from the Broncs. Coupled with a short kick, it gave PHS another short field as they began their next drive at the Bronc 34.

Seven straight rushes, primarily powered by the running back duo of Reed Smith and Toran Graham, culminated in Graham punching it in from the 1-yard line. That tied the game up at 7 with 2:43 remaining in the first half.

The Broncs promptly drove 75 yards in just over a minute to retake a 14-7 lead with 1:28 left in the half, but the Panthers would respond.

Despite a poor return to the 15-yard line, PHS was able to gain momentum on a last-minute drive. An 18-yard catch got 15 yards longer thanks to a horse-collar tackle by the Broncs, which set the Panthers up in Jackson territory.

A spectacular catch by Sam Whitlock got the Panthers into the red zone, and two plays later, Schwahn found Whitlock again on a comeback route. Whitlock then turned the ball upfield for the 16-yard touchdown to tie the game at 14 going into the half.

“We were down early and we battled back,” Kistler said. “I am proud of our guys.”

After the first half finished with fireworks, the second half began slower as both teams were forced into three-and-outs to start.

The Panthers then drove down the field and again were forced with a decision from inside the Bronc 10 yard line. The team decided to kick again, which resulted in a Sweeney field goal to put the Panthers up 17-14 with just under 2:30 left in the third.

The Broncs answered on their next drive, however, as they covered 80 yards in just under two minutes. Heading into the fourth quarter, Jackson took the lead on a 17-yard TD run.

The Panthers and Broncs exchanged three-and-outs, which culminated in PHS mounting one last drive with six minutes left in the game.

The Panthers were pushing into Jackson territory when they were faced with a fourth-and-1 with three minutes left.

The decision? Give the ball to Graham.

In most situations, the 6 foot, 1 inch, 220-pound fullback is almost guaranteed to gain at least a yard, but on this play, the Bronc defense forced him into a loss and a turnover on downs.

“We finished the play a lot against Green River, with Jackson we saw a lot of stalemates across the board,” Kistler said. “We need to find a way to push to that next level.”

The Broncs were then able to run out the clock, handing the Panthers their third loss in four games.

Heading into a Friday matchup with Evanston (5-3 overall, 1-3 3A West) the Panthers will have their season on the line in a “win or go home” game at 6 p.m.

“All the games that are guaranteed, those are done,” Kistler said. “The seniors know what is at stake and the younger guys have followed suit.”

The Panthers will be hosting senior night along with an orange out night, as the Panthers look to finish their home schedule undefeated.

The winner of the game between the Panthers and Red Devils will earn the No. 4 seed in the playoffs and face the winner of a Douglas-Worland matchup in the first round of the playoffs next week.