Firestorms occur when a big fire, craving oxygen, creates its own wind. That morning, as the searing wind blew gales flecked with fire, everyone who worked or lived at Old Faithful was evacuated.

By Sept. 9, all Yellowstone roads were closed with … 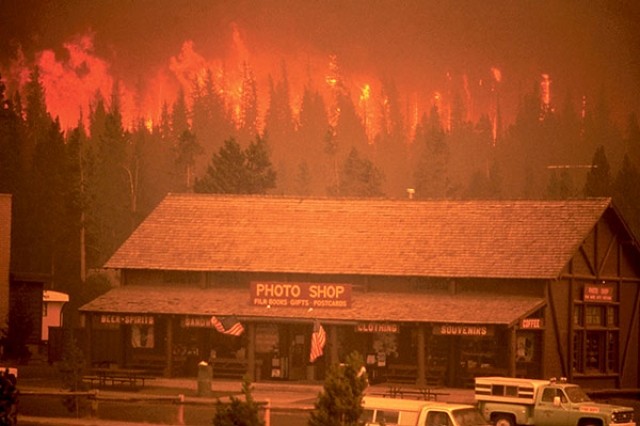 The fire, leaping from tree top to tree top, seemed determined to devour everything in its path when Ranger Lee Whittlesey was guarding the road between the photo shop and the fire at Old Faithful in Yellowstone National Park on Sept. 7, 1988.
Photo courtesy National Park Service, photographer unknown
Posted Tuesday, September 3, 2013 2:39 pm
By Gib Mathers

That day, a firestorm from the North Fork Fire slammed Yellowstone National Park’s iconic geyser and everything around it. A historic inn, named for the famed tourist attraction, was in peril.

Firestorms occur when a big fire, craving oxygen, creates its own wind. That morning, as the searing wind blew gales flecked with fire, everyone who worked or lived at Old Faithful was evacuated.

By Sept. 9, all Yellowstone roads were closed with the exception of the North Gate in Gardiner, Mont., which provided access to Mammoth Hot Springs. The next day, Mammoth and the Lake area were evacuated.

Pandemonium might be an apt description of Lee Whittlesey’s tribulations at Old Faithful that blazing hot day 25 years ago this week. Whittlesey, who lives in Gardiner, is the park historian.

He recently wrote an article about that fateful September day. During a telephone interview last week, his recollections flowed with ease, like those of so many others who faced that fiery summer 25 years ago. Whittlesey is a writer, at ease with words, and he has a surprising answer when asked what he thought about what he experienced firsthand.

“I was fortunate to be there,” he said.

Whittlesey was a law enforcement ranger in 1988. On Sept. 7, he was guarding the barricade that barred motorists from the fire lane between the Old Faithful Inn area and employee housing and the road east over Craig Pass to West Thumb.

“Three-hundred-sixty degrees around me, everything was on fire,” Whittlesey said.

Thousands of embers were in the air. Everything they touched burst into flames, including tuffs of grass sprouting from cracks in the parking lot just south of the inn, Whittlesey said.

Meanwhile, Whittlesey’s future wife, Terri Ray, was on top of the Old Faithful Inn. She was with about 30 concession employees who were beating out ember-fed spot fires lighting on the roof. Fearing the log structure was doomed, she cried unabashedly, Whittlesey said.

An exterior sprinkler system had been installed the year before the fires of 1988 ravaged the park. Suddenly, sprinkler water was cascading down the sides of the inn, Whittlesey recalled.

Whittlesey feared the fire would overrun his position at the barricade. The fire sounded like 10 freight trains, he recalled.

He ran. So did a fire crew guarding the gate with him, shouting, “Every man for himself!”

Whittlesey reported on his handheld radio he was leaving his post. The anonymous reply was simple: “10-4.”

He thought he was going to die.

“‘So this will be the end for you,’” Whittlesey thought.

In the parking lot between the inn and Snow Lodge, he ran into reporters and photographers from Time magazine. They wanted to hike to Observation Point above the Old Faithful geyser to photograph the cataclysm.

But the reporters went anyway.

Rather than risk his life, he let them go. Later, he saw a fold-out photo of the fire in the magazine.

A small medical clinic burst into flames in the parking lot. About 20 employee cabins went up in smoke, too.

Whittlesey met Ranger Gary Youngblood. Together, they helped a woman who was having trouble breathing.

“Can you believe this?” Youngblood asked him. “We’re right in the middle of this.”

The fire passed on, Whittlesey said. The inn was saved, and no one was injured that day, according to the National Park Service.

Yellowstone was still burning, but Mother Nature lent a helping hand Sept. 11 with snow, ushering in the eventual conclusion of the Fires of ’88.

The service took a lot of criticism for supposedly allowing fires to burn unchecked in Yellowstone.

But efforts were underway to suppress all fires in Yellowstone by July 21, according to the service.

People believe they can control everything. That is a misconception, Whittlesey said.

“It is mere illusion in my opinion,” he said.

Wildland fires are inevitable. Yellowstone was parched that summer. The only thing that could douse the flames was snow, Whittlesey said.

Whittlesey is the author of 10 books, including “Death in Yellowstone: Accidents and Foolhardiness in the First National Park.” A new edition of the book will be released soon, he said.

It’s a story he recalls, and can tell, quite well. That’s not an experience you forget.