Ramsey returns to the arena

It was just one lap — one quick run around the Cody Stampede arena on the season premier of the 2020 Cody Nite Rodeo. But the wind was up, Rylee Ramsey’s mount was antsy and she …

Ramsey returns to the arena 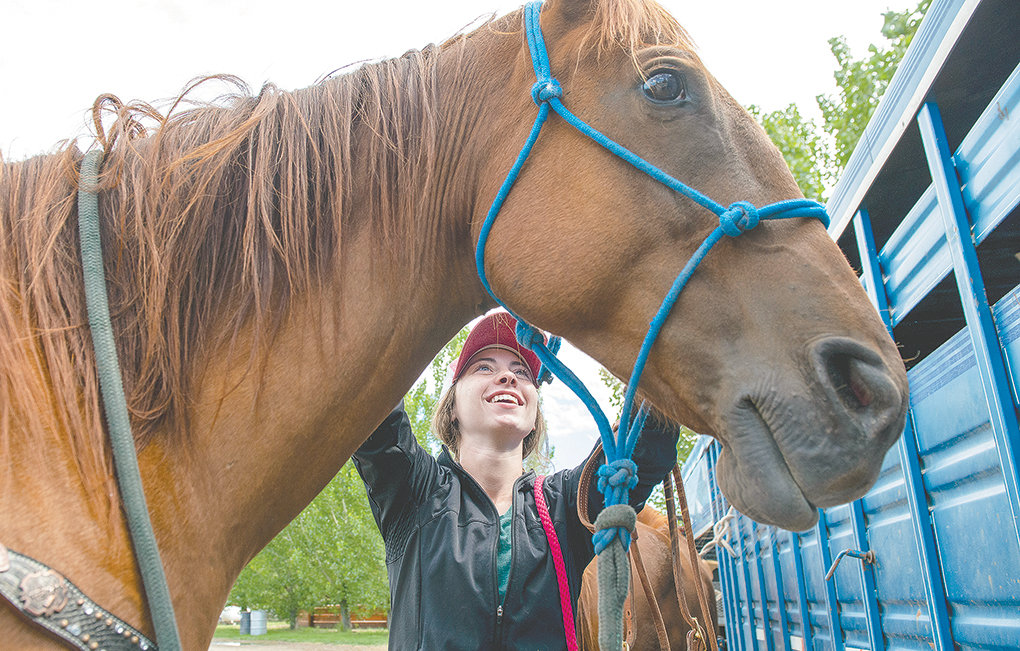 Powell’s Rylee Ramsey saddles a horse named Julio while looking to purchase a new ride last week. Ramsey, Miss Cody Stampede 2020, returned to the Cody Stampede arena on Saturday for the start of the Cody Nite Rodeo season. It was her first time back at the arena since suffering a head injury in an August 2019, riding accident. She’s been working hard to gain confidence in the saddle.
Tribune photo by Mark Davis 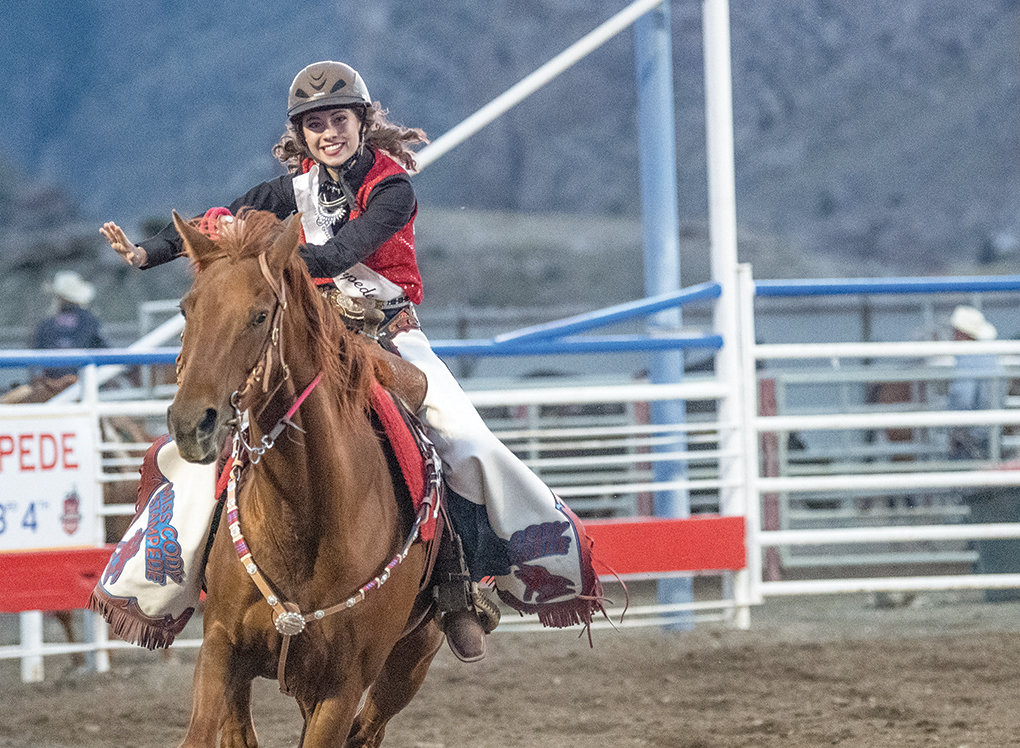 Rylee Ramsey rides into the Cody Stampede arena on Saturday for the first time since her accident last August. Ramsey will wear a helmet, instead of a cowboy hat with a tiara embellishment typical of most rodeo queens.
Tribune photo by Carla Wensky 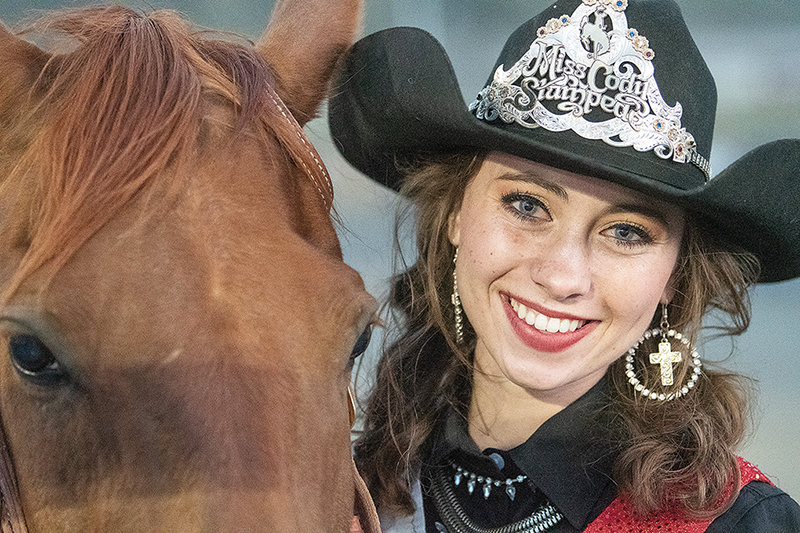 Rylee Ramsey poses with her 2020 Stampede Rodeo tiara and a borrowed horse for her first performance since her accident last year.
Tribune photo by Carla Wensky 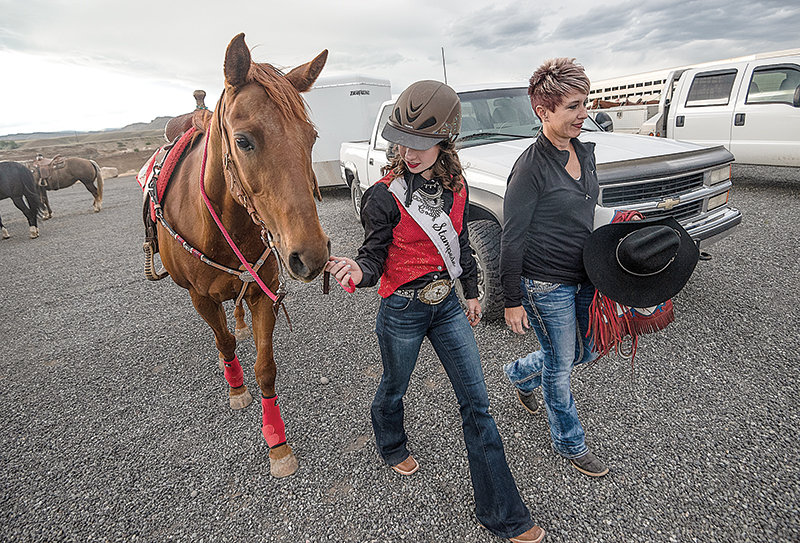 Rylee and Stephanie Ramsey lead Red, an appendix thoroughbred, to the Cody Stampede Rodeo grounds on Saturday — her first appearance in the arena since falling and suffering a life-threatening injury there last year.
Tribune photo by Carla Wensky 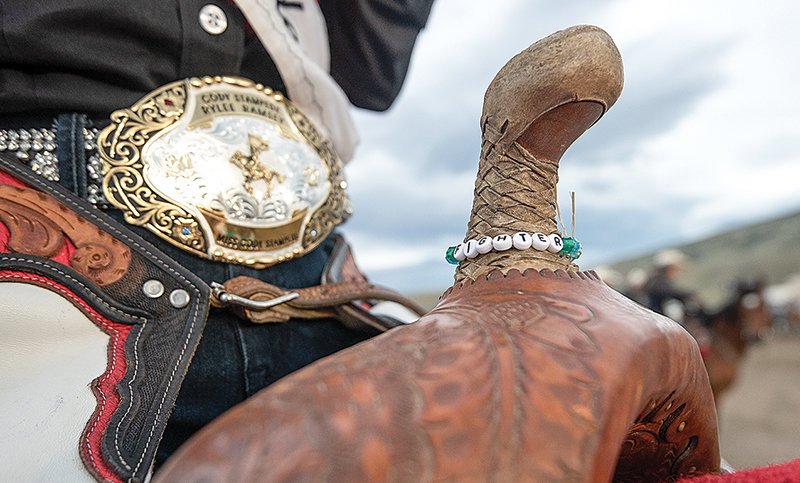 Rylee Ramsey places a small handmade bracelet, with beads spelling ‘FIGHTER,’ on her saddlehorn every time she rides. The bracelet was made in memory of her grandfather.
Tribune photo by Carla Wensky 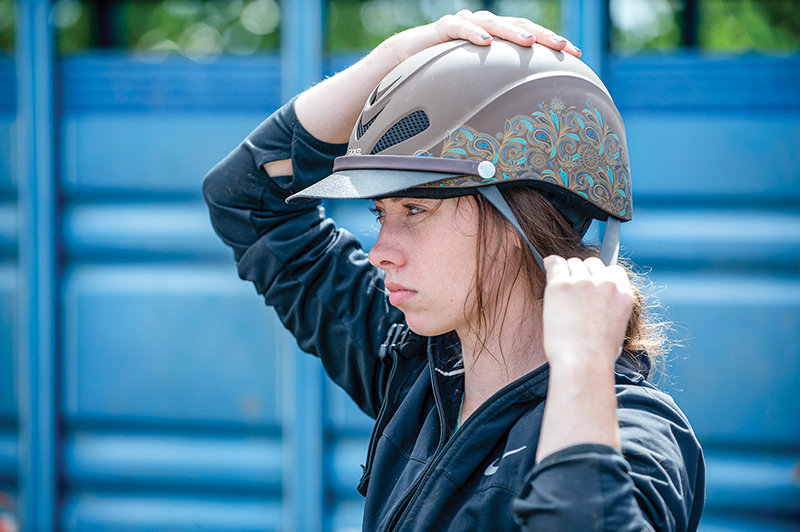 Rylee Ramsey puts on her helmet during a practice session at Serenity Stables in Basin. After suffering a brain injury while riding without a helmet last year, Ramsey now refuses to ride without one.
Tribune photo by Mark Davis
Previous Next
Posted Thursday, June 25, 2020 8:25 am
By Mark Davis

It was just one lap — one quick run around the Cody Stampede arena on the season premier of the 2020 Cody Nite Rodeo. But the wind was up, Rylee Ramsey’s mount was antsy and she couldn’t stop a flood of memories.

It’s going on a year since she fell. Ramsey doesn’t remember the accident, just waking up to the flashing red and white lights of emergency vehicles and seeing her mother covered in blood. The flashbacks were hard to get out of her head as she urged her borrowed appendix thoroughbred onto the arena’s soft, manicured dirt for the first time since that night.

Saturday’s crowd had no way of knowing her story, just that she was the rodeo queen and this was her moment. Unlike many performing that night, Ramsey, Miss Cody Stampede 2020, wore a helmet during her run; it was in place of the traditional black felt, wide-brimmed hat and Stampede tiara worn by past queens.

“I don’t get another chance. There are some things you don’t get a second chance for,” she said. “Wearing a helmet is better than having a dead queen on your hands.”

It was August 27, 2019. A strong gust of wind pushed through the Shoshone River Canyon to the west, spooking her horse. It took off, Ramsey desperately trying to gain control. They hit some gravel and went down. She stayed in the saddle and came back up as the horse recovered. Then she lost her grip while holding the reins in one hand and trying to get her rodeo flag out of its boot with the other. The horse turned sharply, throwing her. She hit hard, landing on her head.

Ramsey had lacerations all over her petite body and was bleeding profusely. The arena was almost deserted that night. Her mom, Stephanie, rushed to her while calling out for help from the few who were there for the practice session.

Ramsey was rushed to Cody Regional Health for treatment. They were going to release her, but her mom could tell there was something wrong. Doctors ordered a CT scan and found her brain was bleeding. She was immediately rushed to Billings for emergency care.

It wasn’t how Ramsey wanted to arrive in the city. After graduating from the Shoshone Learning Center in Powell, she had planned to study radiology at Montana State University Billings. She was already packed and excited to start the new chapter of her life. But after the accident, everything would change. She’s currently attending Northwest College and working hard to regain her confidence in the saddle.

Ramsey recovered relatively quickly from her injuries; it’s her confidence that’s taking time to mend. She suffered a setback in January, when her horse suddenly died. The Ramseys decided to seek some special training and assistance in locating the perfect replacement for her horse. They found just the right combination at Serenity Stables in Basin.

Mitch Shelhamer and his wife, Suzi Richards-Shelhamer, run an odd combination of businesses. Mitch, a former bull and bronc rider turned farrier, trains riders and runs the equine side of the business. Suzi, formerly the Pet Nanny of Worland and a yogini, works the dog kennels and deals with the emotional and spiritual side. They found that combining the two disciplines helped many riders after a wreck. Mitch knows: He had a wreck in the late 90s, resulting in a brain bleed just like Ramsey’s.

Mitch is working on techniques to take away Ramsey’s anxiety while in the saddle. “What we’ve been working on is some breathing techniques that we use in our yoga classes. When we get frightened, we have a tendency to breathe shallow,” he said. “That makes the anxiety worse. Horses can read our energy. And if our anxiety is high, their’s will be within minutes.”

The two have been working on keeping Ramsey calm and learning ways to take away her horse’s momentum when she feels out of control. He’s also helped her find her new “unflappable” horse.

Mitch found just the right combination of speed and calmness in Julio, an 8-year-old quarter horse. Ramsey took four days of test rides before deciding it was the perfect match.

“So far, we’ve both done really good together,” she said while moving Julio through a test ride. But it will take time for the two to bond and trust each other.

One exercise requires Rylee to put her hands out, like she has wings, and close her eyes while Mitch guides Julio. The exercise makes Ramsey nervous, but it’s intended to help her “feel the horse” and develop trust.

Everything they do is intended to make Ramsey release the anxiety she has about injuries and use the lessons for her future, he said, whether on horseback or in her daily life.

“Life throws us curves and we have to either overcome or run from them the rest of your life,” Mitch said.

“I hold my hands over her energy centers and basically pray. I send good intentions and clean out any negative, stagnant or misaligned energy,” Suzi said.

On Saturday night at Stampede Park, Ramsey and her mother avoided discussing the accident.

“I tried to lighten the mood,” Stephanie said. “We laughed and joked. We didn’t talk about what happened the last time we were there.”

The Ramsey family has good friends through the Cody Nite Rodeo. They were encouraging and supportive, surrounding the two as Rylee saddled up. She placed a tiny hand-made bracelet on the saddle-horn with beads spelling out ‘FIGHTER.’

She made it after her grandfather, Richard Warren, passed away. “They had a special bond,” Stephanie said.

Ramsey had decorated the lettered beads with translucent blue and green beads on either side. Blue often symbolizes support for those fighting prostate cancer. The green beads were “just because” Rylee liked them at the time. Later, after the accident, Rylee came to learn that green is often associated with those fighting traumatic brain injuries.

“I carry it with me every time I ride,” she said.

Stephanie tried to hide her tears. She wanted to be strong for her daughter’s special night. “If I get worked up, Rylee gets worked up,” she said.

Due to the wind and her nerves, Ramsey decided to do her inaugural run without a flag.

“I wasn’t mentally prepared for that yet,” she said.

The horse started acting up at the gate, “taking off and rearing up” a couple times before the end of breakaway roping. But as the last calf was pushed from the arena, Ramsey was ready, taking off with a smile. The ride was quick, but it has taken most of the past 10 months to get her back and confident in the saddle.

Ramsey intends to continue her training, spend time with Julio and represent her crown the best she can at the Stampede Rodeo next week.