The first crash took place around 7:30 a.m. at the intersection of Lane 6 and Road 8, north of Powell. In that incident — which resulted in no serious damage to the school bus — Park County School District No. 1 officials say the bus driver … 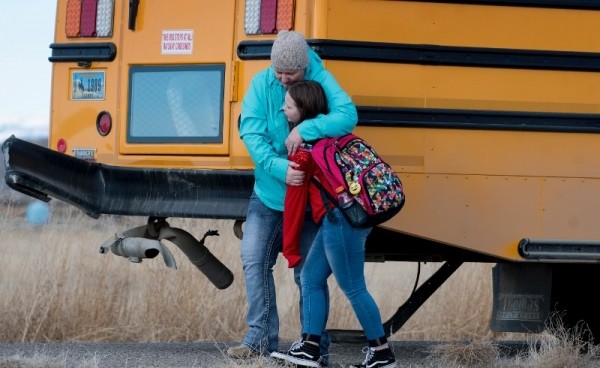 A mother comforts her child on Monday afternoon after a Powell school bus was hit by a pickup at the intersection of Lane 5 and Road 8. The bus was involved in another crash earlier in the day.
Tribune photo by Mark Davis
Posted Tuesday, March 6, 2018 1:53 am
By Tribune Staff

A Powell school bus was involved in two separate crashes with pickup trucks on Monday, with the second resulting in a bus aide being taken to the hospital as a precaution. No students were injured in either incident.

The first crash took place around 7:30 a.m. at the intersection of Lane 6 and Road 8, north of Powell. In that incident — which resulted in no serious damage to the school bus — Park County School District No. 1 officials say the bus driver didn’t see an approaching truck and failed to yield. Fourteen students had been riding on the bus.

The second crash, involving the same bus and driver, occurred around 4 p.m. at the intersection of Lane 5 and Road 8, just 1 mile north of the morning incident. Two students were on board at the time.

A female bus aide was taken to Powell Valley Hospital by ambulance as a precaution and later released.

School bus driver Allen Wilson was not at fault in the afternoon crash, Park County School District No. 1 Superintendent Jay Curtis said Monday evening, adding that the preliminary information he had is that a pickup “blew through the stop sign” and hit the bus in the back while it was going through the intersection of Lane 5 and Road 8.

“I need to vouch for the fact that this is a really, really good employee that has an outstanding, pretty much perfect record,” Curtis said of Wilson. “It truly was lightning striking in one day ... totally kind of a fluke thing.”

Adding to the busy day for Powell Valley Hospital EMTs and Powell volunteer firefighters, another truck drove through a power line on Road 8 around 4:22 p.m. That was while emergency responders were in the middle of dealing with the second bus crash, less than a half-mile away.

Many of the details about the three crashes — including the names of everyone involved — were unknown as of press time Monday as reports from the Park County Sheriff’s Office were still being prepared.

In the morning incident, the bus was traveling east on Lane 6 and slowed down as it came to a yield sign at the intersection with Road 8.

“The driver [Wilson] slowed down at that yield sign and just started to give it a little gas going through that intersection, and the truck came through right then,” said Stephen Janes, transportation supervisor for Park County School District No. 1.

The bus driver said he didn’t see the truck, which was traveling south on Road 8 and had the right of way. With mirrors on the side of the bus, “the truck must have been in that blind spot,” Janes said.

“The truck veered into the ditch on the west side of Road 8,” he said; it didn’t roll and stayed upright. The driver of the truck, a 44-year-old Powell woman, was taken to Powell Valley Hospital, treated and released.

As per the district’s protocol, all the 14 kids on the morning bus were checked out, found to be fine and the district waited for their parents’ release, Janes said. Another school bus took some of the kids to school, and other students were taken to school by their parents, he said.

Janes said he was glad everyone was safe and thanked emergency personnel for their quick response. He said the bus aide and Wilson did a “really nice job of keeping order on the bus” and keeping the kids calm.

Per standard district protocol, Wilson was immediately given a drug and alcohol screening after the morning incident and it came back “completely negative” for substances, Curtis said.

Wilson was given the option to take the afternoon off, but given that the morning incident had been relatively minor, he felt he was good to go, Curtis said. He called Wilson an “exemplary” employee.

Curtis said he planned to meet with Janes on Tuesday to “figure out what happened totally in both of them, what we can do to avoid it in the future, how do we learn from it ...”

— By Tessa Baker and CJ Baker

(Editor's note: This version corrects and updates information about the injuries to the bus aide.)