When Powell Middle School students gathered to celebrate being named a National Blue Ribbon School, they also learned just how rare the honor is.

“Powell Middle School is only one of the six … 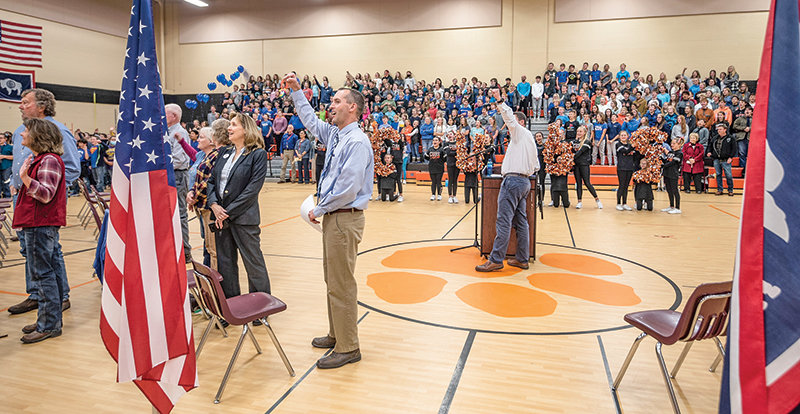 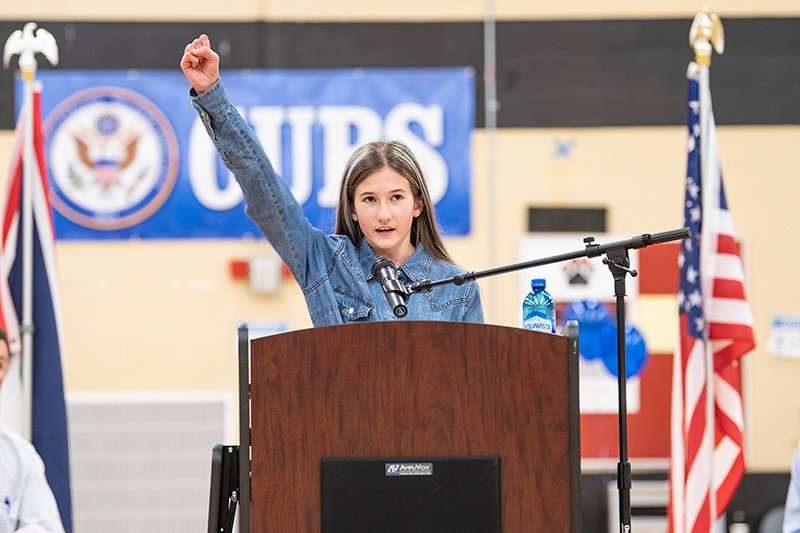 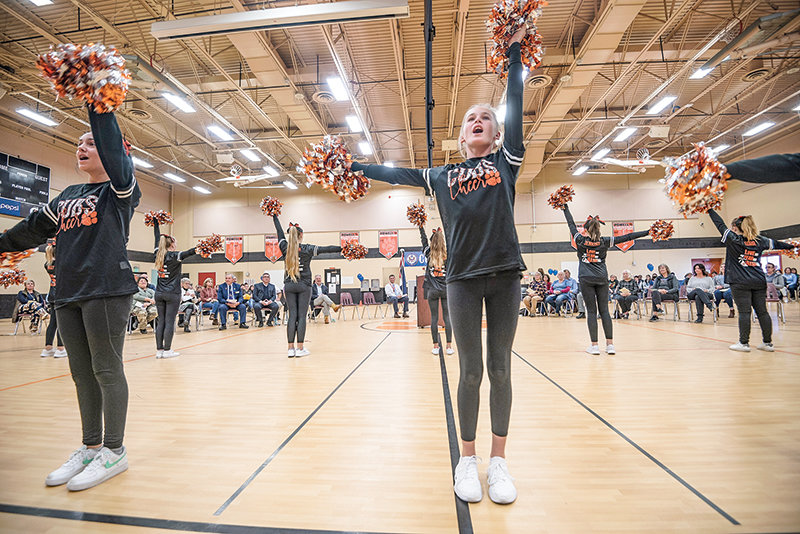 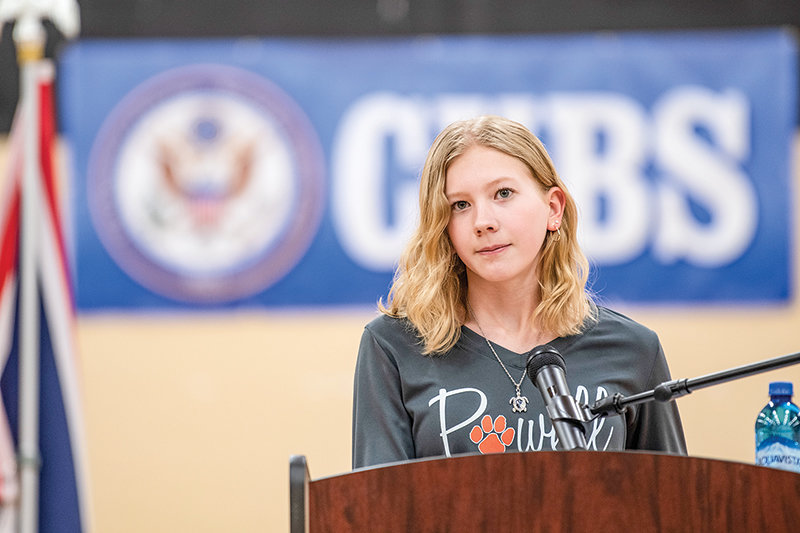 During Powell Middle School’s celebration of its National Blue Ribbon School award, Kyra Morrow talks about what it means to be a Cub.
Tribune photo by Carla Wensky 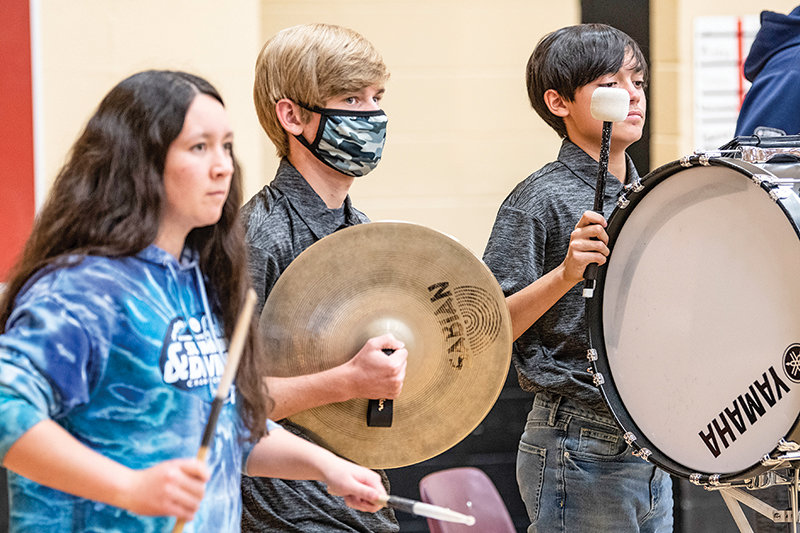 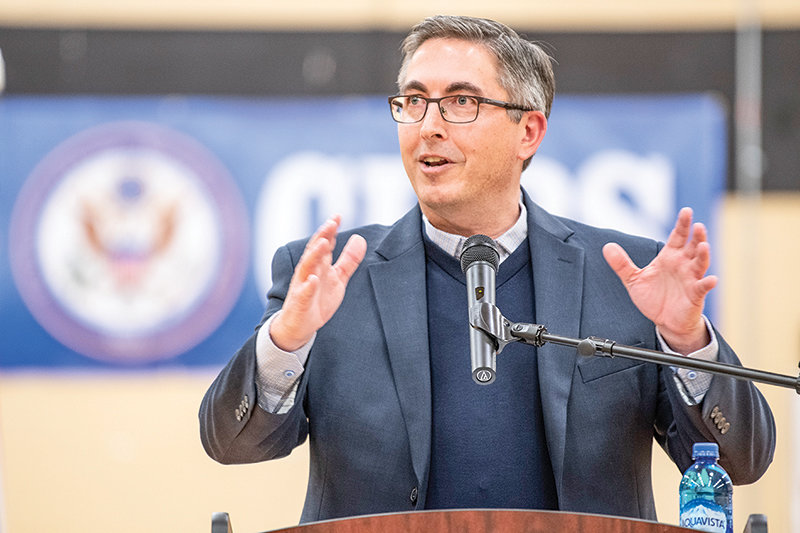 At right, Park County School District 1 Board of Trustees Chairman Trace Paul told students and staff they’re ‘doing a phenomenal job’ and encouraged them to keep up the great work.
Tribune photo by Carla Wensky 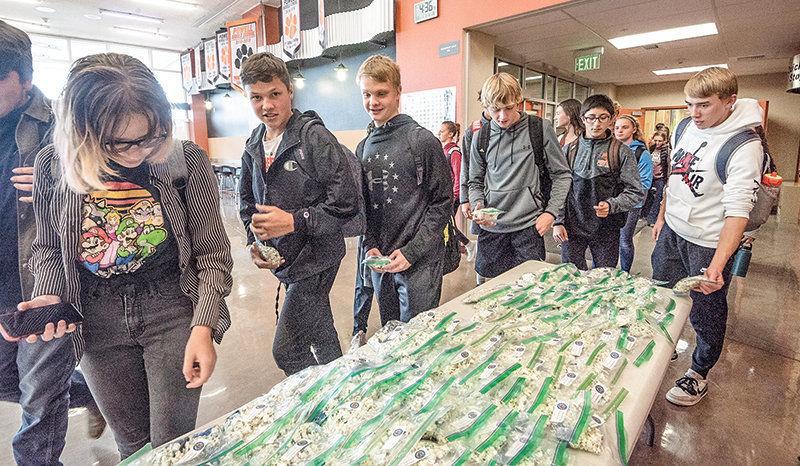 Students, including Isabella Gomez, Keona Wisniewski, Trevon Abraham, Landon Hernandez, Jordan Loera and Evan Whitlock, get popcorn at the Blue Ribbon celebration. A group of Powell High School students attended the event, since they were at the middle school during the years that the award is based upon.
Tribune photo by Carla Wensky 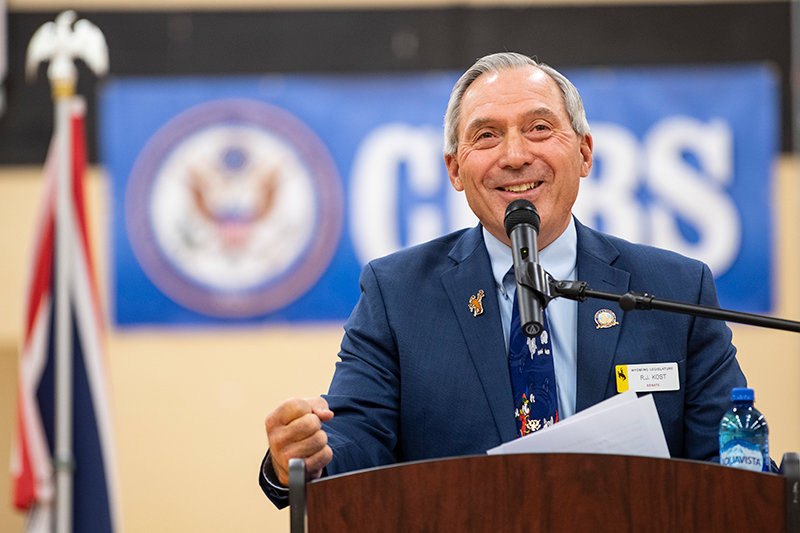 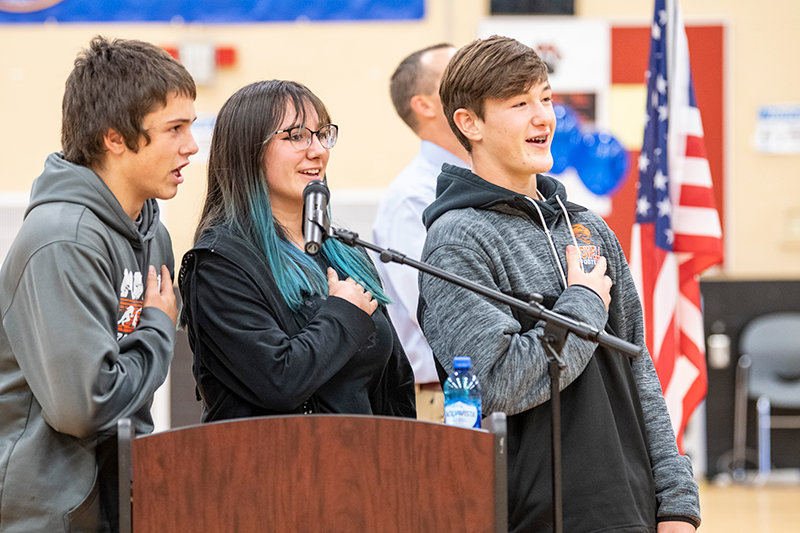 When Powell Middle School students gathered to celebrate being named a National Blue Ribbon School, they also learned just how rare the honor is.

“Powell Middle School is only one of the six middle schools from Wyoming to ever be recognized since 1982,” said Kyle Rohrer, the school’s principal, eliciting applause from the students, staff and community members gathered at Wednesday’s celebration. He said the award is considered “the highest honor that an American school can achieve.”

“There are approximately 16,000 middle schools in the United States, and 45 of them were awarded Blue Ribbons,” Paul said. “That shows you what a small but prestigious group we fall in, to be one of 45 out of 16,000 in the nation.”

Only 302 public schools in the nation received the recognition this year, with only two in Wyoming.

“You’re doing a phenomenal job,” Paul said. “We couldn’t be more proud of what happens here at Powell Middle School.”

Sen. R.J. Kost of Powell, a former longtime math teacher, shared another statistic: Since 1982, only 56 schools in Wyoming have been recognized with a National Blue Ribbon award. He noted that Powell’s Parkside, Southside and Westside elementary schools have received the honor as well.

“Your school believes that everybody can achieve high expectations,” Kost said, commending students for their hard work.

He also recognized the “outstanding job” staff members do each day, as well as the families who support students and the school.

“Without the wonderful community we have, and the support for our schools, and the willingness to do whatever it takes for you to be successful, we would not be where we are today,” Kost said. “And believe me, we’re the best in the state, and we’re one of the best in the nation.”

In a follow-up ceremony on Thursday, U.S. Sen. John Barrasso presented an American flag that, at his request, was flown over the U.S. Capitol in Powell Middle School’s honor. He also congratulated the students, teachers, parents and school board for their rare achievement.

“And to think that you did it in a year where the whole world has lived through a pandemic,” Barrasso said. “Everybody played a role — from the custodians that came in early in the morning, who stayed late at night to make sure that all of the schools in Wyoming could stay open during the entire pandemic year, to the bus drivers, the cafeteria workers, the school nurses, everybody contributes to the success of this program.”

“It takes consistency of achievement over time that happens through a great deal of discipline and hard work, and a relentless dedication to ensuring that all students are learning at high levels,” Curtis said.

He said there are two kinds of Blue Ribbon Schools: exemplary high achieving and those that are recognized for closing the achievement gap.

“This school has achieved exemplary high achievement, which is actually the more difficult to achieve, because you have to demonstrate it over a longer period of time,” Curtis said. “It’s not a flash in the pan.”

He also emphasized how rare the recognition is.

“So you take 45 middle schools around the country who were awarded the Blue Ribbon, and only five of them achieved the exemplary high achieving [award],” Curtis said, adding, “This truly is the epitome of achievement.”

He congratulated staff and students, encouraging them to “keep up the hard work.”

While the 2021 Blue Ribbon recognition is based on the school’s 2018-19 assessments results and the results prior to that year, “our scores are continually top 10 in the state,” Principal Rohrer said.

“Last year’s scores that you guys gave us on our WY-TOPP [assessments] were neck-and-neck with the same scores that got us the Blue Ribbon award,” Rohrer said. “This is just the tip of the iceberg … we’re going to continue to do that hard work to make these achievements.”

Assistant Principal Chanler Buck thanked former staff and students for helping establish the foundation for what the school is today. He said the generational sense of Panther pride — shared among students, staff, parents and community members — will continue at Powell Middle School.

This fall, Powell Middle School held a writing contest on what it means to be a Cub. Three students — sixth-grader Samantha Edgell, seventh-grader Taylor Peters and eighth-grader Kyra Morrow — were selected to represent their grade level at Wednesday’s celebration.