“That bear was just about ready to charge my dog when I shot that bear spray,” said Mike Musso. “I tell you, that stuff works.”

Musso, his wife, Lisa, and sons, Garrett, 15, and Wade, 13, were camped at Newton Creek Campground … 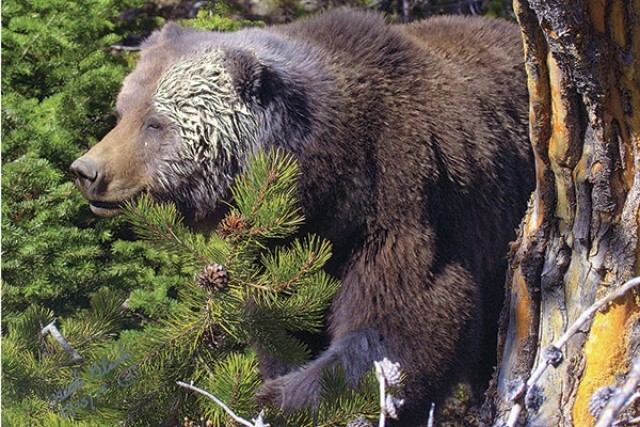 The grizzly bear Mike Musso encountered on the North Fork of the Shoshone River wasn’t as big as this grizzly photographed in Yellowstone two weeks ago, but it was an unnerving encounter just the same.
Courtesy photo Neale Blank
Posted Tuesday, June 18, 2013 3:58 pm
By Gib Mathers

An unexpected encounter with a grizzly on the North Fork ended without injury for a Powell man and his dog, thanks to the use of bear spray.

“That bear was just about ready to charge my dog when I shot that bear spray,” said Mike Musso. “I tell you, that stuff works.”

Musso, his wife, Lisa, and sons, Garrett, 15, and Wade, 13, were camped at Newton Creek Campground Thursday, June 6, when the incident occurred.

It was about 8 a.m. Musso had tied their dog, Winter, to a chain outside while he dressed inside the family camper. He exited the camper to watch three deer in the campground before they wandered away.

Moments after Musso re-entered the camper, Winter began barking like she had never barked, Musso said.

Sensing something was amiss, he stepped back outside. “There was a grizzly bear standing on his hind legs,” Musso said.

The bear was only 10 yards away. Musso called Winter, but the dog was not responding to his commands. He tried to pull Winter by the chain into the camper with him, but the dog wouldn’t budge. Then the griz was 5 feet from the camper, and it was looking at Winter, Musso said.

“The bear was coming closer, only feet from the camper now, and our dog was backed away from both the bear and I, as far as her chain would let her,” Musso said. “Then I realized I had my bear spray.”

While Musso was crouched in the camper’s doorway, the bear started to huff as though it meant to attack, Musso said.

Musso grabbed the bear spray. “The bear was just getting ready to charge when I shot it in the nose,” he said.

It was one healthy squirt.

“The bear backed up, shook its head and bolted through the brush and up the hill behind us,” Musso said.

Some people two campsites over witnessed the commotion and were convinced the grizzly would have gotten Winter, Musso said.

It wasn’t his first close encounter with a grizzly. A few years ago, he was fishing the North Fork of the Shoshone River when two large bruins appeared. He was startled, but luckily, so were the grizzlies, and they vanished into the brush.

The Mussos spent the night at the campground. The next morning, the U.S. Forest Service closed the campground because four or five grizzlies were seen on Newton Creek, Musso said.

The bear had been frequenting the campground for more than a week, so Game and Fish decided to relocate the him, Ellsbury said.

Department employees were preparing to set the trap when the bear entered the campground again, so they sedated him with a dart gun instead.

The 3-year-old sub-adult male weighed 200 pounds. He was relocated to the Bridger-Teton National Forest, Ellsbury said.

It’s a scary narrative, but the Musso family is safe.

“We were blessed that everything turned out OK,” Musso said.