Local business once again on track to be first in U.S. to breed species in captivity

A Powell game bird farm has been given a green light to move to the next step in raising greater sage grouse by the Wyoming Game and Fish Department, with plans to collect grouse eggs this …

Local business once again on track to be first in U.S. to breed species in captivity 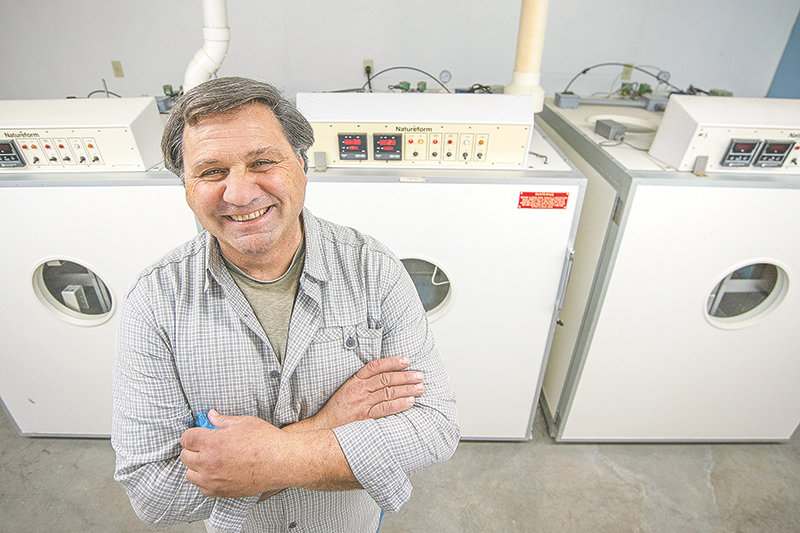 Karl Bear, manager of Diamond Wings Upland Game Birds in Powell, is all smiles inside the bird farm’s new hatchery this week. He received notice Wednesday that the farm’s application and inspection were approved and they’ll be allowed to collect wild sage grouse eggs this spring in an effort to raise the species in captivity. It promises to be the first such attempt in U.S. history.
Tribune photo by Mark Davis
Posted Thursday, January 16, 2020 8:25 am
By Mark Davis

A Powell game bird farm has been given a green light to move to the next step in raising greater sage grouse by the Wyoming Game and Fish Department, with plans to collect grouse eggs this spring.

Diamond Wings leaders are already working on their next plan of action, deciding between pointing dogs or radio telemetry during their search for wild sage grouse eggs, Bear said.

There has never been a successful effort to breed sage grouse in captivity in the U.S. Diamond Wings, the largest game bird farm in the state, has been the only farm to apply for a permit since the Wyoming Legislation passed 2017 legislation allowing private game bird farms to attempt the experiment.

Diamond Wings, located west of Powell on Lane 10, applied to raise the species each of the last two years and received initial Game and Fish approval. However, those efforts ended when farm managers decided to step away from the process due to the cost of new facilities and equipment.

This year is different. Thanks to financial help from former owner and energy entreprenuer Diemer True, facilities were in place for the inspection and ready to move forward. True started a nonprofit foundation last year to raise donations for the expensive renovation process; begun as the Diamond Sage Grouse Foundation, it's now named the Western States Sage Grouse Recovery Foundation.

Diamond Wings now has separate facilities to hatch wild grouse eggs and segregated flight pens to raise a brood stock — built to comply with requirements of the 2019 permit application requests by the Game and Fish, said owner Dennis Brabec.

“We actually improved upon their requests with additional modifications and upgrades of what they previously requested,” Brabec said.

The price of improvements to the facility and hatchery equipment aren’t the only expenses the farm will have to pay to host the experiment. A large portion previously used to raise pheasant, chukar and other game birds is being temporarily closed to meet regulations requiring sage grouse to be segregated from other game bird operations by 100 feet. The farm typically raises almost 15,000 birds in the adjacent facilities.

Brabec said the Western States Sage Grouse Recovery Foundation has indicated it will provide financial assistance due to the loss of other breeding facilities.

“I’m an individual that owns a farm, not a corporation,” Brabec said. “Raising birds is an expensive endeavor. If you don’t have enough volume you can’t generate enough income to cover all your costs. The people in the foundation are also business people. They understand the business aspect of this.”

There will be more large expenditures in the future, including the high cost of radio telemetry, if used, to find nests to efficiently collect wild eggs in May. The price tag for the labor-intensive procedure could cost several hundred thousand dollars.

The only other facility currently attempting to breed greater sage grouse in captivity is in Canada. The Calgary Zoo has had success raising the species in its multi-million dollar facility, the Devonian Wildlife Conservation Centre. In a partnership with The Nature Conservancy of Canada and Parks Canada, the Centre released 66 sage grouse into the wild, “significantly boosting one of Canada’s most endangered birds at a time when fewer than 250 remain,” the Centre reported last spring.

“These are early days in the urgent effort to save this precious species, but what we have been able to accomplish so far has been truly remarkable,” said Dr. Axel Moehrenschlager, the zoo’s director of conservation and science, in a recent release. “With the help of many partners, we have built an innovative, multi-year breeding and reintroduction program, which we hope will ensure this iconic prairie bird can flourish for generations to come.”

Bear said he has been studying the prospects of raising sage grouse since 2006. In the past few years he’s made trips to Calgary to study their sage grouse facility, as well as spending time at the George Miksch Sutton Avian Research Center, in Bartlesville, Oklahoma. The Sutton Center is a private, nonprofit organization that specializes in avian research, including several grouse species.

While not a scientist, and without a large research team, Bear, who’s managed the facility for more than 25 years, has been successful at raising many difficult game bird species and is confident he can breed a sufficient brood stock.

Critics of the Wyoming law have suggested that, if this experiment were to be tried, it should have been done by a research facility or public university.

Rep. Eric Barlow, R-Gillette, was one of the few in the House to vote against the bill in 2017.

“In a university or a research setting, that’s one thing,” Barlow, a veterinarian and rancher, said recently. “But for the pilot project to be privatized, I’m not sure that’s where we’ll be best served with a public resource.”

Other critics have said that, even if the imperiled species can be raised in captivity, they shouldn’t be because of the chance of farm-borne diseases being released into the wild. Game and Fish regulations only allow private game bird farms to hatch wild eggs and breed the resulting brood stock in captivity. The regulations do not allow the birds to be released.

They also require an accounting of all birds and timely reports of any mortalities. Should grouse die in the experiment, and disease is found, the department has the authority to take the stock from the facility and rescind the permit depending on case by case evaluations, said Scott Edberg, deputy chief of wildlife.

“The [Game and Fish] Commission and the department is committed to making sure the regulation is implemented and adhered to and that the collecting of the eggs and raising of the birds is done properly,” Edberg said.

Some estimate that more than 16 million sage grouse once lived in the sagebrush steppe in 11 western states and Canada, with somewhere between 200,000 and 500,000 believed to live in the U.S. today.

Rearing efforts likely will not change wild populations of the species for the foreseeable future. While there’s a law on the books making it possible to rear the species, releasing those birds to the wild is a completely different situation.

Most evidence available suggests grouse can be reared in captivity, but efforts to augment wild populations have yet to prove successful. True said as much when he owned Diamond Wings.

“I don’t think it’s reasonable to think that raising a captive population would be a material augmentation to wild populations. What we’re trying to do is have one additional arrow in the quiver that would help avoid having the listing of the bird as endangered,” True said in 2018. “This is supplemental to efforts on habitat.”

The effort is now set to begin, with Bear at the lead.

“Isn’t it something?” he said Wednesday. “This is the year!”

Grouse population down in recent years, but trending up in recent decades

Sage grouse populations in Wyoming have been on a decline for the past three years, the Game and Fish Department says. And wing counts from this past fall gave no indication that the population is set to rebound. Last year’s count showed 1.1 chicks per hen, down from the year before.

“To have the population grow, we need at least 1.5 chicks per hen,” said Leslie Schrieber, sage grouse program manager for the department.

But the break even point — where populations are stable — is 1.2. And with the nature of the wing count — a voluntary hunter survey — it’s impossible to say the figure of 1.1 chicks per hen is 100 percent accurate. The actual number of sage grouse in Wyoming, which has the most sage grouse and sagebrush steppe habitat in the country, is largely unknown. And the range of the population estimates in the U.S. is huge — somewhere between 200,000 and 500,000. Schrieber said she is more inclined to look at long term trends.

While the precipitous drop over the last century is startling, “numbers are actually trending up” over the past 25 years, she said. In 1995, lek counts revealed an average of 12.5 males per lek. In 2019, the average was up considerably to 20.1.

The modest declines in the past three years hasn’t changed the state’s position on Wyoming’s fall hunting season. Hunter surveys show 5,035 hunters spent 13,092 days hunting the species with a 2.1 bird per hunter success rate, for a total of 10,422 birds harvested.

Editor's note: This story has been updated to reflect the current name of the foundation.