A Powell police officer who put his own life on the line to rescue a teenager from the Garland Canal this summer has been honored for his efforts. 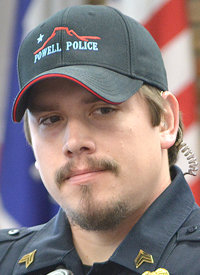 A Powell police officer who put his own life on the line to rescue a teenager from the Garland Canal this summer has been honored for his efforts.

At last week’s Powell City Council meeting, Sgt. Sean Alquist received a Life-Saving Award for his “prompt and alert actions in the line of duty.”

Officers had been asked to be on the lookout for a runaway juvenile on Sept. 3. They found the teen near Coulter Avenue and North Evarts Street, but she fled.

From there, “she made her way down to the canal [and] decided it was time to bring things to an end and jump in the canal,” Powell Police Chief Roy Eckerdt explained to the council. Officers tried to get the teen out of the water, but “she was not willing to be rescued at that point,” the chief said.

Meanwhile, the canal’s current swept the girl downstream and toward North Hamilton Street, where the water flows under a bridge and down a dangerous drop structure. The teen got within about 30 feet of the structure, police said, but Alquist sprang into action.

“He stripped off his gear, he bailed into the canal and … managed to push her to the opposite side of the canal,” Eckerdt said — even as she tried to get away from him.

Other officers were then able to get the teen out of the water and to safety. At the time, Alquist was only about 10 feet away from the drop structure.

“The likelihood of surviving going through one of those is probably not very good,” Eckerdt said in an interview, adding that, while the waters of the irrigation canal might look peaceful, “the undertow and the current within that thing is extreme.”

At the Nov. 15 council meeting, the chief called Alquist’s dedication to duty “a credit to himself, the Powell Police Department and the City of Powell.” The officer — who joined the department in 2019 and was promoted to sergeant in April — received an ovation from the council and the audience. A department Facebook post recognizing the accomplishment went on to receive more than 1,100 “likes” and “loves” and over 100 appreciative comments — including from the teen’s family members.

Eckerdt said there are likely many others who deserve recognition for their roles in September’s life-saving effort.

“Many of our residents … don’t understand or know what actually goes on day-to-day and the stuff that our people are involved with as far as our police department,” he added at the council meeting.

Council President Tim Sapp remarked that, “It’s not every day we can honor one of our officers, but we are … proud of [them] when they do get honored.”

In September, two other officers, Kevin Bennett and Ryan Davis, were presented with Life-Saving Awards for reviving a woman who had overdosed on opioids.

Additionally, an off-duty Park County Sheriff’s deputy rescued a juvenile from a lateral off the Garland Canal in October; the juvenile had been stuck in a partially submerged UTV that had crashed into the water.

That deputy has not yet been publicly identified, but the department previously said he was being considered for a commendation.