Wyoming awarded TCT more than $10 million in federal CARES Act money last year for a number of projects to expand broadband access to rural areas of the Big Horn Basin.

While the company has … 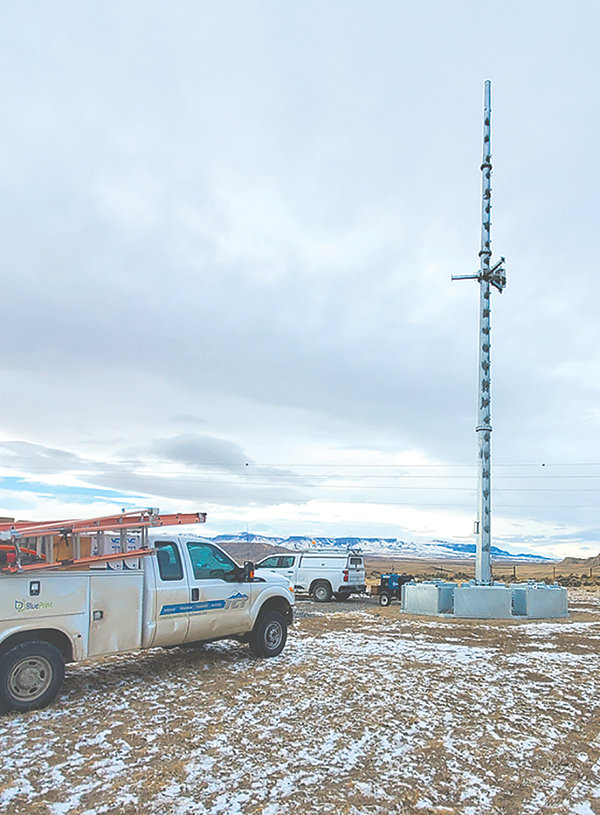 This tower near the Sunshine Reservoirs outside Meeteetse was one of four 60-foot towers TCT erected as part of the ConnectWyoming program, which aims to bring more broadband options to rural customers in the state. Other towers have been delayed.
Photo courtesy TCT 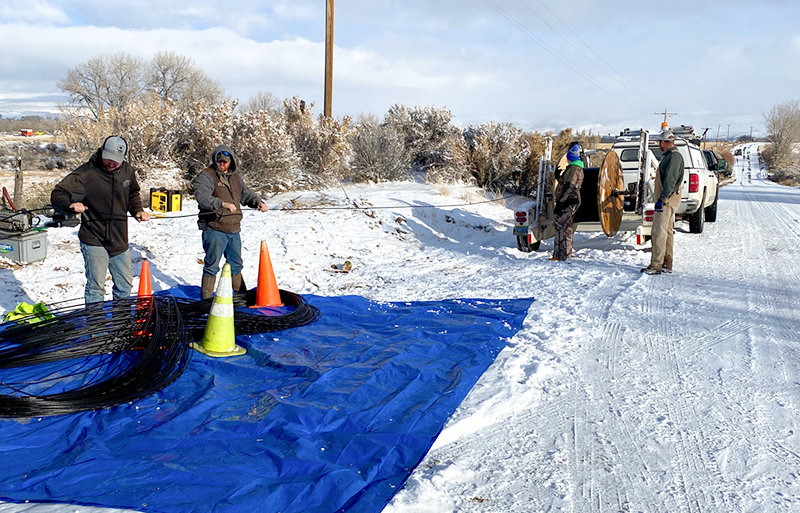 TCT crews work on fiber lines in the Shell area in December. Besides erecting several towers to connect rural residents to broadband, many of the projects are laying fiber to the towers or to homes.
Photo courtesy TCT
Previous Next
Posted Thursday, February 25, 2021 8:25 am
By Kevin Killough

Wyoming awarded TCT more than $10 million in federal CARES Act money last year for a number of projects to expand broadband access to rural areas of the Big Horn Basin.

The funding came with a deadline to complete the projects by Dec. 31. When the work began last fall, TCT COO Richard Wardell said the company was faced with completing a year’s worth of work in a matter of a few months.

Congress and former President Donald Trump extended the deadline to spend CARES Act monies, but Wardell said the state hasn’t facilitated the extension yet for the funding in the ConnectWyoming program.

Still, TCT is proceeding with the projects under the contracts it won. Wardell said the biggest bottleneck with erecting towers and putting down fiber is the permitting process, especially when it comes to the federal government.

With Gov. Mark Gordon backing ConnectWyoming, Wardell expected TCT would have an easier time fast-tracking any federal permitting processes. It hasn’t turned out that way.

One of the projects involves building fiber to an existing tower on Polecat Bench, which goes through Bureau of Reclamation land. The federal permitting process includes environmental, archeological and sometimes paleontological studies, looking for fossils and Native American artifact sites.

When the tower on the bench was erected several years ago, TCT completed all the archeological examinations. But as the company sought approval to build fiber lines to the tower — to improve the speeds it could offer — it had to go through the archeological process again. An archeologist studied the area that would be disturbed and tribal councils were given an opportunity to weigh in on the project.

Two tribes protested the project, with one asking for the tower to be torn down and the other just asking to review the plans to make sure the path of the fiber won’t disturb sensitive sites. Wardell said TCT is currently in mediation with the tribes. Meanwhile, the Wyoming State Historical Preservation Office will also have to examine the sites and offer input.

While mediation might resolve the issue, Wardell said there’s a chance Biden’s moratorium, enacted by executive order immediately after he took office, may be extended and continue to hold the project up.

“What I don’t know for sure is which one of those [the mediation process with the tribes or Biden’s executive order] will hold it up,” Wardell said.

Meanwhile, a tower planned between Powell and Cody near George Farms, which is being constructed on private land, is facing a legal challenge. The Park County Commission approved a permit for the tower, and TCT is proceeding with the work, but nearby resident James Jolovich has challenged the permit in court. Jolovich contends the tower will impact his health and view of Heart Mountain.

Besides the delays in permitting, a number of towers were not received until January. However, Wardell said TCT accomplished a great deal of the work on the contracts they were awarded.

The company built towers near the Sunshine Reservoirs outside of Meeteetse and another near Shell in Big Horn County, and those are in use. A tower in the Willwood area, called the Northrup Tower, has been erected, but is awaiting the completion of a nearby tower, called the Beet Dump Tower. Once that second tower is done, customers can work off the Northrup Tower.

Another tower near Cody, called the Sage Creek Tower, has been erected, and some final work is being performed. All these towers, with the exception of the Beet Dump Tower, are 60-feet tall and TCT was able to do the construction in house.

The company is also building three 150-foot towers, which is being done by an outside contractor. These include the Beet Dump Tower, as well as the one near George Farms and another near the Powell Golf Course, called the Garland Tower. The delay in the delivery of the towers affected the contractor’s schedule, but these are expected to be constructed soon.

TCT previously completed the fiber and power services for those towers. That includes fiber between Deaver and the Garland Tower, with customers along that route able to connect to it.

“Many of these customers have previously not had any broadband options,” Wardell said.

Other projects funded by ConnectWyoming included upgrades to existing towers, which are complete. Two fiber projects took fiber to communication sites in the McCullough Peaks, and that project is complete. Another fiber project connected to communication sites on Cedar Mountain west of Cody; the customers it will serve currently have only satellite options for broadband. This project requires additional permitting.

Work on other fiber projects is in various stages of completion, including service in Cowley, Lovell, Greybull and Shell. These will be completed when the ground thaws in the spring.

TCT anticipates all of the towers will be completed before the end of the year, with most of the work done well before that.