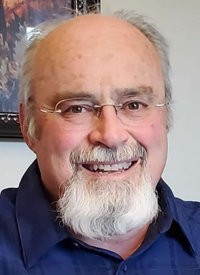 Paul Russell Cross, of Powell, was welcomed into the loving arms of Yahweh, his most beloved creator on Saturday, Oct. 9, 2021.

Paul was born April 15, 1954 in Cheyenne, Wyoming, to Nelson Thomas Cross and Joan Carmella Cross (DiCicco). He grew up alongside his older brother, Lee Thomas Cross.

They traveled the world due to his father being military, and spent his youth playing baseball, basketball, and football. He met his former wife, Linda Sue Cross (Leuschner), in Madrid, Spain, his senior year of high school. They married a few years later and welcomed their three daughters, Jesseca Harleen, Joan Michele and Paula Lyn into the world. They moved from New Orleans, Louisiana, to Powell,  in December 1981.

Paul worked 20 plus years as an operator at Elk Basin Gas Plant and then moved to Rapid City, South Dakota, in 2003 to take care of his aging parents. He returned to Powell in 2009 and took a job with Wyoming Game and Fish, where he had worked seasonally for over 11 years.

If anyone knew Paul Cross, they knew how much he loved the Lord! He shared his love for the Lord with anyone and everyone. He loved his family, his three girls, and his four grandchildren, who so lovingly referred to him as Papa. He cherished his longtime friends and those he fellowshipped with over the years. He was an amazing example of godly love; he was patient, kind, thoughtful, generous, selfless, and giving. He was big, and he was mighty … but he was small and gentle and tender.

Paul was preceded in death by his father Nelson T. Cross his mother, Joan C. Cross, and his youngest brother, James N. Cross.

He is survived by his brother Lee (Janis) Cross; his three daughters, Jesseca Cross, Michele Johnson (Joel) and Paula Cross; and his four grandchildren, Dominik, Averee, Nyah and Knox Johnson.

The family of Paul Cross would like to express much gratitude to the McCoy family that so lovingly welcomed their father and brother into their family as an honorary son and brother. Paul was very appreciative of the many years of generosity, compassion and kindness extended to him. He cherished his lunch dates with Tate, his God-centered conversations with Tate, Brett, Joe and Covette Ramby, Tina and Papa Jeff, and all the years of love that was shared between them.

Services will be held on Saturday, Oct. 16 at 2  p.m., at Thompson’s Funeral Home in Powell.

His Lord said unto him, “Well done my good and faithful servant.” Matthew 25:23