As they hosted Worland on Friday and traveled to Lander on Saturday, the Panther volleyball team was hoping to continue the momentum they gained from the last match of the western conference duals … 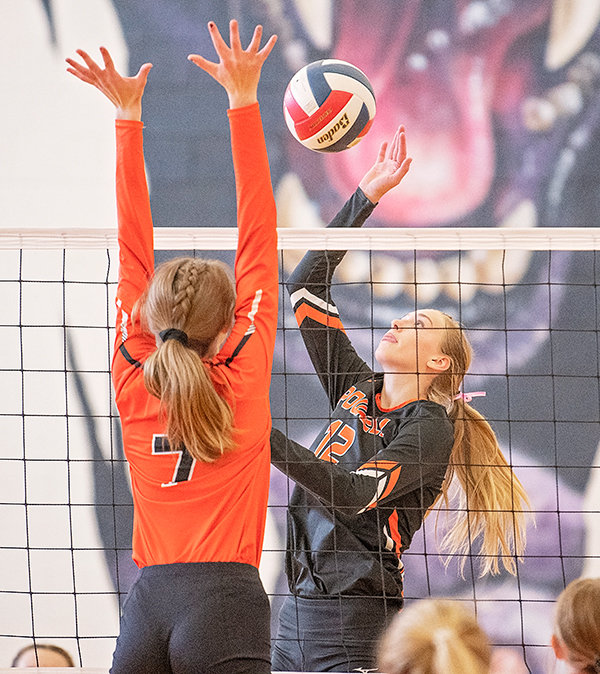 Addy Thorington goes up for a spike against Worland in a home match on Friday. The Panthers will host their final match of the season against Lovell on Friday as they look to secure the No. 3 seed in the northwest quadrant.
Tribune photo by Carla Wensky
Posted Tuesday, October 19, 2021 8:00 am
By Seth Romsa

As they hosted Worland on Friday and traveled to Lander on Saturday, the Panther volleyball team was hoping to continue the momentum they gained from the last match of the western conference duals last week.

The first set between the Panthers and Warriors was tight. The Powell High School squad trailed in the middle of the set 15-11, but was unable to find any momentum out of a timeout. Worland’s hitting helped the Warriors pull away in convincing fashion, 25-13.

The Panthers came out with a statement in the second set, taking a convincing 11-4 lead. Worland almost came back to tie the set, trailing only 11-9, but the Panthers were not willing to relinquish the lead. PHS pulled away, winning the set in the same fashion as the Warriors did in the first set, 25-13. That tied the match.

Heading into the fourth set, the teams continued to go back-and-forth as the match remained close until the last point.

The Panthers seemed poised to walk away with a fourth set victory, leading 22-19, but a timeout by Worland allowed them to seize momentum. The Warriors scored six of the last seven points to win the set 25-23 and the match 3-1.

The weekend did not get easier for the Panthers as they went on the road to face one of the top teams in the state: Lander.

The Tigers (22-1-2 overall, 5-0 3A northwest) came into the match with momentum from the conference duals — where they defeated every team in the southwest quadrant of the state.

The Panthers came back with an early rally against the Tigers in the third set, going up 11-6. However, the Tigers came back from the early deficit and scored 11 straight to lead 17-11.

The Panthers were never able to recapture their early set advantage, as they lost to the Tigers 25-17. It was Powell’s second sweep at Lander’s hands this season.

The Panthers are set to travel cross-county today (Tuesday) to take on rival Cody (20-5 overall, 3-2 4A Northwest) in a non-conference matchup at 6 p.m.

Powell will look to avenge a loss earlier in the season to the Broncs, in which they won the first set, but ultimately fell 3-1.

The Panthers will return home on Friday, for their final regular match of the season. They’ll host Lovell (9-18-2 overall, 0-5 3A Northwest) at 4 p.m. The match will determine who is the No. 3 seed at next weekend’s conference tournament in Lyman.