Coming off a pair of conference losses, the Trapper women’s soccer team was looking to get back on track as they took on Central Wyoming College (CWC) Rustlers and Western Wyoming Community … 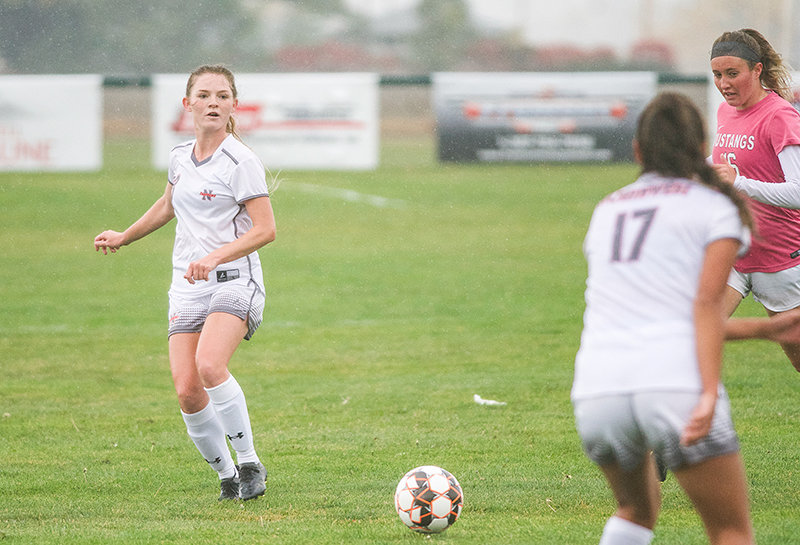 Coming off a pair of conference losses, the Trapper women’s soccer team was looking to get back on track as they took on Central Wyoming College (CWC) Rustlers and Western Wyoming Community College (WWCC) Mustangs at home last week. The Trappers wound up splitting the matches.

Northwest College’s week began against Central Wyoming (2-13 overall, 0-6 Region IX) on Oct. 6, as the women played their second non-conference game against the Rustlers.

The Trappers (6-5-1 overall, 3-2-1 Region IX) controlled the ball in the first half, but coach Rob Hill felt the pace of the game was too slow and led to unnecessary mistakes from his team.

“The hard thing is when there is not a lot of pressure and it leads to some poor decision making,” Hill said.

Despite the pace, the Trappers were able to draw a penalty midway through the first half, with the kick put away by freshman defender Aspen Newland to give Northwest a 1-0 lead.

Continuing to hold possession, and handling with counter-attacks from the Rustlers, the Trappers held that advantage going into halftime.

Going into the second half, Hill decided to adjust the lineup, dropping freshman Peyton Roswadovski back from her striker role into an attacking midfielder role.

The move immediately paid off: Five minutes into the second half, Roswadovski scored on a shot from 25 yards out to give the Trappers a 2-0 lead.

NWC continued to control the match and found a third goal 20 minutes later on a through ball to Lauren Hiatt, which sealed the match and a 3-0 victory for the Trappers.

Heading into Saturday’s match against WWCC (8-4-3 overall, 2-0-2), conditions were set for a sloppy game, as rain poured from the night before and throughout the first half. The sloppy conditions mirrored the Trappers’ play throughout most of the match.

“Truly a disappointing first half,” Hill said. “We would always make the first pass then never find a second one.”

The Trappers conceded a goal early in the match to the Mustangs, with a header off  a corner from Paityn Auger. Hill said it’s been a point of emphasis for the team throughout the season, as the Trappers have continued to work on challenging in the air.

Heading into halftime, Hill decided to have the team slide into a three at the back due to a continued injury to Amrey Willoughby as well as other minor illnesses and injuries.

With less than 10 minutes remaining, Roswadovski had a deflected effort tipped off the crossbar and her rebound attempt blocked out for a corner.

With the match finished 1-0, Hill praised the opposing Mustangs.

“All credit to Western,” he said. “They are a hard working team and give a lot of effort.”

The Trappers will remain at home to take on Western Nebraska Community College (2-9-2 overall, 0-6 region IX) at 1 p.m. Friday. Earlier in the season, the Trappers drew 1-1 with WNCC at Scottsbluff, Nebraska.

The team will also host Northeastern Junior College (10-3-1 overall, 3-1-1 Region IX) at 10 a.m. Saturday. The Trappers lost 5-0 to Northeastern earlier in the season in Sterling, Colorado.

Friday will include a celebration of Northwest College’s 75th anniversary (entrants will receive a red T-shirt), while Saturday is sophomore day.

The Trappers were slated to head to Rock Springs on Tuesday for a makeup game against WWCC (rescheduled from Sept. 8), but inclement weather pushed the match to Tuesday, Oct. 19.

The Trappers had another match with Casper College scheduled for Wednesday that was also scrapped by the storm. Since the Casper game was not going to count as a conference matchup, it was canceled.

The NWC women currently sit in fifth place in the division and, if the season ended now, they would be heading to Trinidad State to take on the Trojans. However, Trappers have the opportunity to reach the top four and host a playoff game next weekend if they can win their last three matches.

“At this point the women know what to do, now they just have to bring the mentality,” Hill said. “We just need to execute.”