Northwest College getting an electrical upgrade

A new line of power poles is cutting across the Northwest College campus. The poles and lines look out of place, but they are only temporary while upgrades are made.

Northwest College getting an electrical upgrade 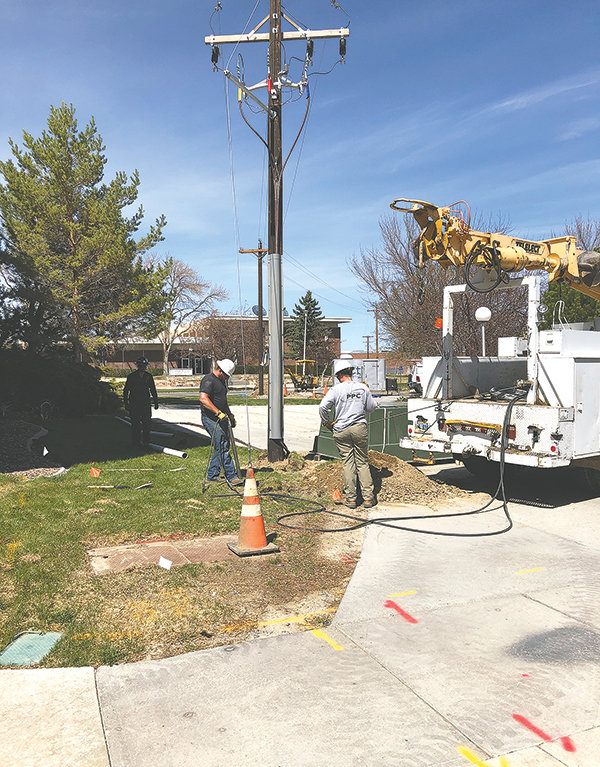 The new power poles set up on the Northwest College campus are only temporary. Crews with Intermountain Electric of Powell erected the poles last week to carry power lines during a system upgrade.
Tribune photo by Dave Bonner
Posted Tuesday, May 5, 2020 8:15 am
By Kevin Killough

A new line of power poles is cutting across the Northwest College campus. The poles and lines look out of place, but they are only temporary while upgrades are made.

The Northwest College campus currently runs on a 4,160-volt system. The rest of the city is on the newer 12,470-volt system.

The city maintains two transformers at its Vining Substation, which reduce the voltage down to 4,160 volts just for the college. The city also has a separate powerline for the college, which provides a majority of its power. There’s no backup if that equipment fails.

Powell Electrical Superintendent Steve Franck said the upgrade to the higher voltage should have probably been completed in the 1990s.

“The college medium voltage infrastructure is in poor condition,” Franck said. “They are very fortunate not to have had a catastrophic failure.”

Replacing the campus infrastructure is going to be done over three phases, with one phase being completed each summer.

The first phase currently underway will be working on the portion of campus south of Seventh Street. On Monday, May 11, the power to that side of campus will be shut off for the work to be complete.

The purpose of the temporary power poles and lines is to keep campus servers running while that work is done. While the servers have backup systems for power outages, the outage will last an extended period of time.

“The system has redundancy, but technology can be finicky. It doesn’t always restart the way you want it to,” Watson said.

All college buildings have been closed to the public since the end of March and are set to remain closed through May. Some operations are continuing in the buildings impacted by the electrical project.

The Ag Workers Clinic operates in the basement of Colter Hall, and the Wyoming Department of Workforce Services is operating out of the Frisby Building. Those facilities will be powered by a temporary generator during the outage.

This first phase is expected to be completed by July 1. All the buildings on that southern side of campus will receive power sooner as various parts of the phase are completed. For example, the Science and Math Building is expected to have power restored before the end of May.

After the first phase is complete, the contractor will remove the power poles and repair landscaping so the campus looks as it did before. Next summer, the college will complete phase two on the north side of Seventh Street, which includes the residence halls.

The city is currently planning a rebuild of the Vining Substation, which is 30 years old. Since the college is replacing the outdated infrastructure, the city will not have to purchase separate equipment to feed the college or have a separate, lower-voltage powerline for the institution.

Pickleball advocates to press commission for use of facility