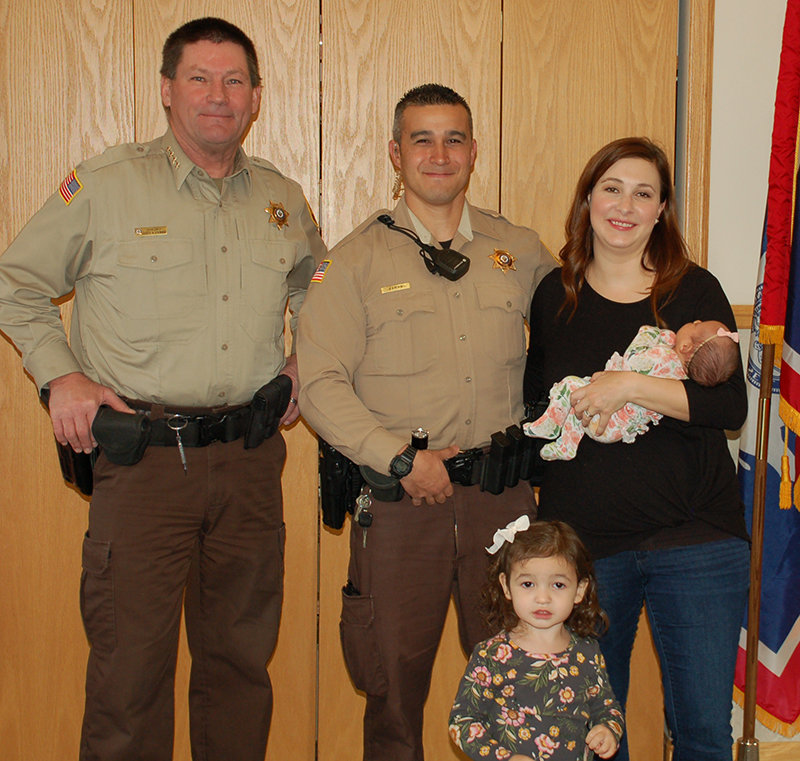 Park County Undersheriff Andy Varian of Cody poses for a photo alongside his wife, JoEllen, two of his children and Sheriff Scott Steward after his recent promotion. Varian, who had been serving as a sergeant, replaces longtime Undersheriff Tom Ehlers.
Photo courtesy Park County Sheriff’s Office
Posted Tuesday, January 12, 2021 8:10 am

Varian replaces longtime Undersheriff Tom Ehlers, who retired from the department in December.

Varian joined the sheriff’s office as a detention deputy in October 2011. He moved to the patrol division in May 2013 and became a sergeant in 2019. With this month’s promotion, Varian is now second-in-command at the department.

“My goals are to continue to foster the culture of professionalism within the department and maintain partnership with the community,” he said in a statement. “I ultimately intend to keep the peace and to promote the mindset of public service.”

Varian said he plans to continuously evaluate the department’s gear and both maintain and further develop training standards “that best prepare deputies and dispatchers for the mental and physical challenges of the job.”

“Law enforcement service across the country appears to be getting more difficult rather than easier,” he said. “An emphasis on training will help Sheriff’s Office personnel stay sharp, have an active mindset, and be experienced to deal with the challenges of a growing community.”

Varian began his law enforcement career with the Ripon, California, Police Department’s traffic safety section, where he assisted with traffic safety grants, traffic studies and other administrative tasks. While visiting family in the Cody area, he and his wife, JoEllen, decided they wanted to call Park County home. They live in Cody with their four children.

Sheriff Steward said, in his new role as undersheriff, Varian will not only ensure quality service from the deputies and dispatchers he supervises, but will motivate and lead the department with pride and professionalism while commanding its respect. A couple of Varian colleagues congratulated him on the promotion when the news was posted to the department’s Facebook page.

“He’s an excellent example of a fine officer and leader,” wrote Bill Brown, the coordinator of Park County Search and Rescue.