Rural Park County residents who want to vote on Election Day may have to travel further to do so, as traditional polling places in the Garland, Clark, Heart Mountain, Wapiti and South Fork areas are … 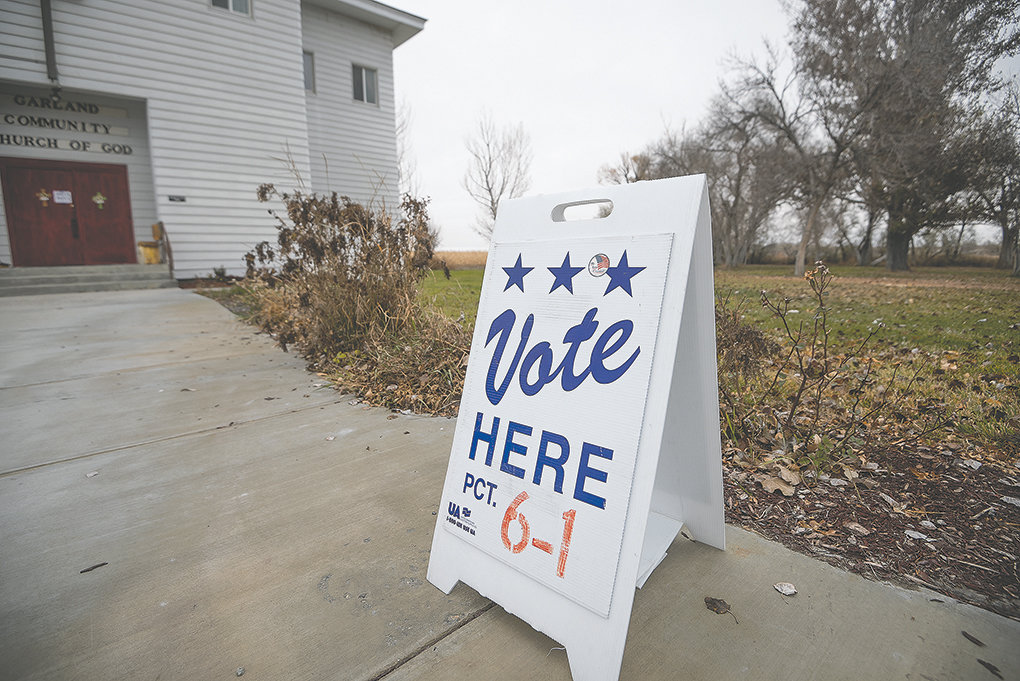 A sign greets voters at the Garland Community Church of God on Election Day in November 2018. In response to new COVID-19-related directives from the Wyoming Secretary of State’s Office, Park County elections officials plan to close this location and four others for the primary and general elections in 2020.
Tribune file photo by Carla Wensky
Posted Tuesday, May 19, 2020 8:20 am
By CJ Baker

Rural Park County residents who want to vote on Election Day may have to travel further to do so, as traditional polling places in the Garland, Clark, Heart Mountain, Wapiti and South Fork areas are being eliminated.

At the four remaining polling places in Powell, Cody and Meeteetse, there will be social distancing precautions meant to limit the spread of COVID-19.

Park County Clerk Colleen Renner said the restrictions — which are being imposed across the state — could lead to lines at the polls on primary election day, Aug. 18.

“We’re really hoping people will think of everyone and just request an absentee ballot — vote in the privacy of their own home with a cup of coffee, if that’s what they want,” Renner said.

County officials are also trying to make it easier to vote absentee. Voters have long been able to cast their absentee ballots through the mail, through early voting at the Park County Courthouse in Cody or by dropping their ballot off at the courthouse. But this year, the clerk’s office intends to accept absentee ballots at secure drop off boxes in Powell and Meeteetse, too.

“It’s still up in the air,” Renner said Friday, “but that’s our hopes.”

She said a lot of thought has gone into the changes, which include consolidating all Election Day voting to the Park County Fairgrounds’ Heart Mountain Hall in Powell, the Cody Auditorium, the Cody Recreation Center and the Meeteetse Senior Center.

As of last month, county officials had planned to keep all nine polling stations from the last election cycle. On May 1, however, Wyoming Secretary of State Ed Buchanan told counties they generally can have no more than seven polling places for the primary.

Hundreds of Park County voters will now need to decide whether to vote absentee or to vote at a different polling place.

During the primary election in 2016, roughly 1,600 voters cast their ballots at the South Fork Fire Hall, the Wapiti school, Garland Community Church, the Mountain View Clubhouse and the Clark Pioneer Recreation Center, according to county figures.

This time around, those in Clark, Garland and Ralston/Heart Mountain who want to vote in person on Election Day will need to cast their ballots at the fairgrounds in Powell, while North and South Fork residents will be directed to vote at the Cody Rec Center.

Buchanan said the statewide effort to consolidate polling places is aimed at ensuring compliance with the CDC’s recommendations for curbing the spread of the new coronavirus. That includes guidance to limit face-to-face contact, stay 6 feet apart and avoid mass gatherings.

At the South Fork Fire Hall — the most-used of the five polling places being shuttered — Renner said it was not going to be possible to keep adequate space between voters.

“Every way we played the scene we could not make social distancing work out there very well,” she said, adding that it was a similar situation at the Clark Pioneer Recreation Center.

Beyond the concerns about social distancing, state officials have noted that election judges are generally older and therefore at higher risk of becoming seriously ill if they become infected with COVID-19.

“If county clerks were to maintain their current number and locations of polling places, county clerks would have enormous difficulty in obtaining the required number of election judges and maintaining proper social distancing procedures,” Buchanan wrote in his directive. “This could put the health and safety of our traditional poll workers at significant risk.”

In Park County, only about 30 of the roughly 200 people who have expressed interest in serving as election judges this year are under the age of 66, county officials said. That could severely narrow the pool of workers.

The county will still need about 70 judges, she said, down from about 100.

Other precautionary measures are being put in place at the polls.

Across Wyoming, “all election judges shall be supplied with a face mask and sterile gloves and required to wear them at all times while on duty and in the polling place,” said Will Dinneen, a spokesman for the Secretary of State’s Office. The office will provide personal protective equipment for poll workers, along with sanitizer for both workers and voters, Dinneen said.

Counties are also being required to offer curbside voting to all citizens with special needs and to frequently sanitize surfaces and equipment.

At last week’s news conference, Buchanan said that “the overwhelming majority of Wyoming citizens prefer to vote in person,” noting that only about 20% of voters have cast absentee ballots in the past; in Park County’s 2016 primary election, 1,503 of 6,750 total voters (slightly more than 22%) used absentee ballots.

Buchanan stressed that the state is not moving away from in-person voting.

Still, there’s likely to be an increase in absentee voting in 2020, as elections officials nudge voters toward that option.

The Secretary of State’s Office is mailing out educational pamphlets — offering “a reminder to everyone that, if they so choose, they can request an absentee ballot,” Buchanan said. He specifically mentioned how those ballots could be useful for people who are more highly susceptible to the virus or may not feel safe voting in-person.

In Park County, “we’re highly encouraging you to do an absentee ballot,” said Cole, though he added that, “you can still come and you can vote at the polls.”

Any registered voter can request an absentee ballot be mailed to them or pick one up at the elections office inside the Park County Courthouse; the ballot can then be returned to the courthouse or by mail.

Citizens can receive and cast absentee ballots up to 45 days ahead of the primary election.

Under the law, counties are required to open an absentee polling place for in-person early voting on July 2, but the Secretary of State’s Office has allowed counties to push that timeline back until the end of July or early August, Dinneen said.

For more information, visit https://sos.wyo.gov/Elections/ or www.parkcountyelections.net. Park County residents with questions can also call the elections office at 307-754-8620 or email voterinfo@parkcounty.us. The office is continuing to offer curbside service at the courthouse for those who are at-risk or don’t feel comfortable going into the building.

Although the Secretary of State’s directives only apply to the Aug. 18 primary election, Renner said that Park County plans to stick with just the four polling locations for the Nov. 3 general election, regardless of what else changes. Opening up more polling locations for the general election would confuse voters, Renner said, “so we feel consistency is the best policy here.”

“It’s so new to all of us,” Renner added. “We’re just doing the best [we can] and trying to run scenarios through our head and everything else to protect all our voters.”