Local people and pets share their habitat with rattlesnakes

“The first time we saw it, we knew we were home,” ’Genie McMullan said.

They started building their lives on the land and they love every part of its uniqueness, except one: The rattlesnakes.

They have dogs, cats, goats and fowl. After …

Local people and pets share their habitat with rattlesnakes 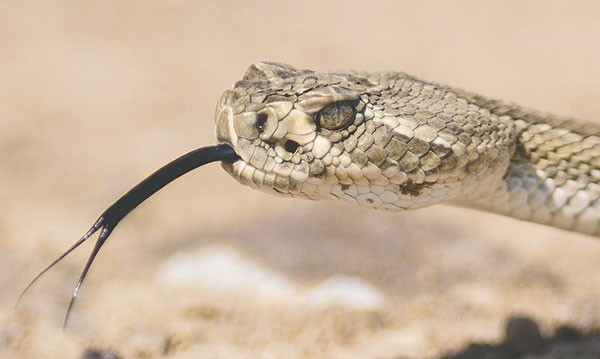 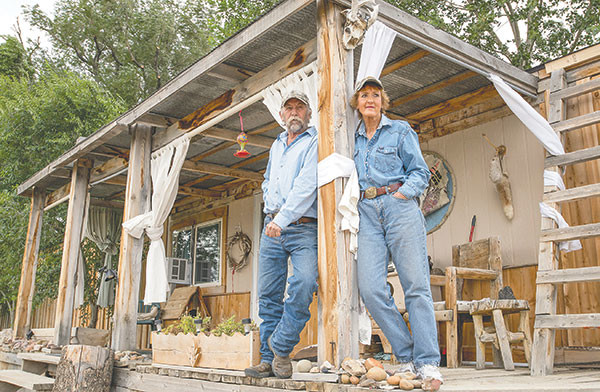 Doug and ’Genie McMullan on their front porch at their ranch near Deaver Reservoir. They are in a constant struggle to keep their property safe from rattlesnakes, including near their home, and have had several pets and a goat bitten by the venomous snakes. 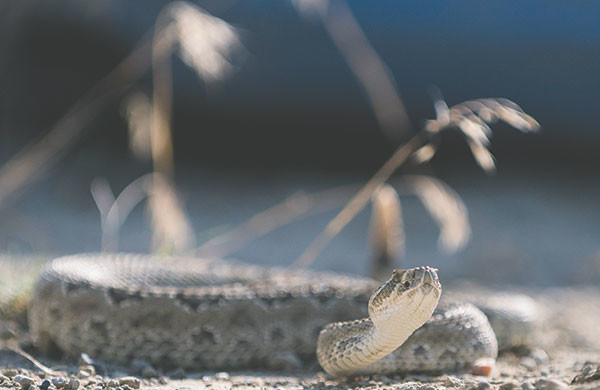 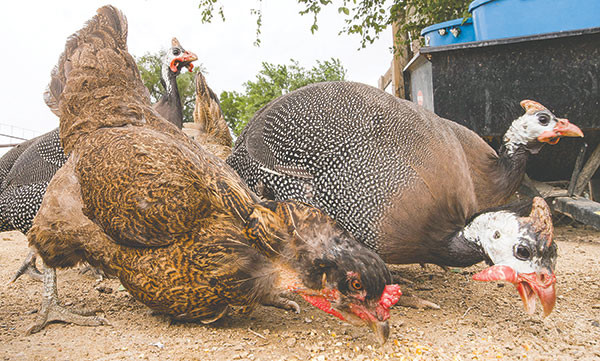 ’Genie and Doug McMullan raise chickens and had purchased guinea fowl after hearing a rumor that they might be helpful in controlling snakes. The rumor was false, but they did learn that the hens are very tasty.
Previous Next
Posted Thursday, July 27, 2017 2:28 pm
By Mark Davis

Doug and ’Genie McMullan grew up as city kids, but after seeing a 300-acre home site near Deaver Reservoir, they didn’t hesitate to make an offer.

“The first time we saw it, we knew we were home,” ’Genie McMullan said.

They started building their lives on the land and they love every part of its uniqueness, except one: The rattlesnakes.

They have dogs, cats, goats and fowl. After several of their pets were bitten, they adopted a new philosophy.

“It’s live and let live until you get to the fence,” Doug McMullan said. Inside the fence around their property is a whole different story. “We don’t take prisoners,” he said.

Some rattlesnake seasons — the time period when the snakes are not hibernating in their dens — start as early as March and can run as late as October, he said.

The McMullans have tried a variety of proposed remedies. They ended up with guineafowl after being told the hens might help keep the population of rattlesnakes down. It didn’t work — but they did discover the plump birds to be very tasty.

They started killing the venomous snakes. ’Genie totes a .38 and Doug carries a shotgun. This year they’ve seen fewer near the house, but they have been forced to dispatch as many as eight in the backyard in one summer. Earlier this year, a bite killed one of their goats — part of their livelihood. Both of them have avoided being struck, but not by much.

“We’ve had so much trouble with them,” ’Genie said. “There was a snake in the road near the mailbox. I thought it was dead, but it was sunning itself. I nearly got bit in the face.”

Now they’re ever vigilant of the danger. They’ve learned not to reach into hidden spaces or step over logs and rocks. Instead, they step on the obstacle and then look for the well-camouflaged foe. And they keep things tidy.

“If you get rid of the habitat for rodents, you end the food chain,” Doug McMullan said.

The couple doesn’t look forward to finding a rattler in the yard, and feel bad they have to be ruthless, but it’s a matter of safety. For those in the snaky areas of northwest Wyoming, it’s not uncommon to kill every venomous snake seen.

“There’s a place for rattlers in the ecosystem, but if they were on my doorstep, I’d do the same,” said Leslie Schreiber, Greybull wildlife biologist for the Wyoming Game and Fish Department.

There are two species of rattlesnakes in Wyoming, according to Schreiber. The prairie rattlesnake is common in northwest Wyoming and the midget faded rattlesnake, which is endangered, can only be found in southern Wyoming. There are no rules concerning killing or possessing prairie rattlers, but it is illegal to kill or possess a faded midget rattler.

Schreiber has been trained to handle venomous snakes in a safe way and has great respect for prairie rattlesnakes, the species common in the Cody region. But she doesn’t suggest that untrained people try handling venomous snakes in efforts to relocate them to more friendly environs. That goes for any wild animal, she said.

The bite of the rattlesnake is rarely fatal. The Centers for Disease Control (CDC) reports that of the 7,000 to 8,000 venomous snake bites in the U.S. per year, on average only five are fatal. And most of those bites happen elsewhere — in states like Texas, Florida, Georgia, Louisiana, North Carolina, Oklahoma and West Virginia. Those in most jeopardy are small children, people with weakened immune systems and those bitten in places close to the blood stream, such as the face or neck. The vast majority of those bitten receive antivenin and recover.

Rattlesnakes reach maturity in about four years, according to Schreiber. Until then, every bite — whether in a hunt for food or in defense — delivers a maximum amount of venom. At maturity, rattlers are able to regulate their venom, only delivering what is needed. Most defensive bites from adult rattlers deliver a small amount of venom, according to Schreiber, and they could even be dry bites, delivering no venom.

When people are bitten they receive antivenin and the wound is treated for necrosis, or death of the cells.

She describes the species as an ambush predator in search of mice, chipmunks, pocket gophers, ground squirrels and rabbits. But they only strike in defense when threatened. Unfortunately, pets are often curious and stick their noses into places that are the habitat of rattlers.

“They seem to be out in force this year,” Acker said.

Most dogs are bitten on the nose or in the face and suffer bad swelling after the bite. And he occasionally loses patients after bites. One dog he treated was bitten a dozen times.

“Most dogs, when bit, will run away. This dog went on the attack,” Acker said.

But he is convinced the dog may have survived had it been treated with a vaccine.

“The vaccine creates antibodies in your system to attack the venom. It buys you time if you’re out camping or can’t get to the doctors right away,” Acker said.

Acker said he has yet to see a pet have an adverse reaction to the vaccine.

He has vaccinated his dogs, and he has treated three clients’ dogs for bites this year that were vaccinated. The vaccine greatly reduced the symptoms, and the dogs went home the next day, he said.

Getting your horse vaccinated may be more important, according to Acker. Horses are usually bitten on the nose, and the swelling will cut off their airways. Unlike many animals, horses can’t inhale through their mouths, so a swollen nose can suffocate them.

Acker said he hasn’t seen a vaccine for cats yet, and there is no vaccine for humans, he said.

If your pet is bitten — vaccinated or not — get it to a veterinarian.

“It’s critical that you still get help as soon as you can,” he said.

If you’re lucky enough to observe a rattlesnake from a safe distance, you might think they appear mean; it’s a common reaction. But it’s an undeserved reaction, according to Schreiber.

“They look how they look. They are undeserving of the reputation of being evil. They are an animal like any other wild animal — they just want to be left alone,” she said.