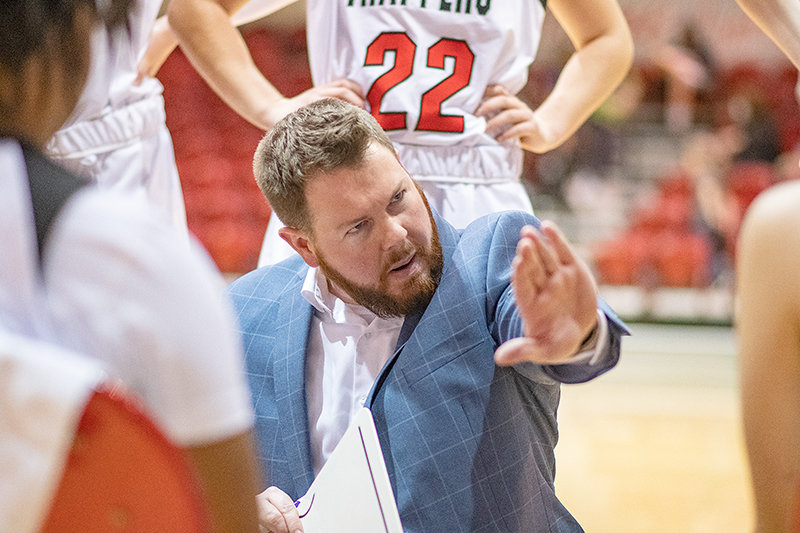 Northwest College head women’s basketball coach Camden Levett speaks to his team in a game against Western Wyoming in March. After three seasons at the helm at NWC, Levett is joining Moberly Area Community College as an assistant.
Tribune photo by Carson Field
Posted Tuesday, July 13, 2021 8:25 am
By Carson Field

Levett spent three seasons as the head coach of the Trappers, posting 26 wins and 47 losses. His teams’ winning percentages improved each year, with NWC finishing 10-12 and reaching the quarterfinals of the NJCAA Region IX Tournament in 2021. His time at Northwest was his first head coaching gig.

“Being the head coach at Northwest was very beneficial to my career,” Levett said. “I was able to learn on the fly, and there’s no quicker way to learn than diving right in. The continuous learning is something I believe in and I’ll always try to grow as a leader.”

“He established a great culture on the court, in the classroom and in the community,” Erickson said. “He’s leaving the program in a good spot with good kids who will compete this year.”

Missouri is familiar territory for Levett. He attended undergrad at University of Central Missouri and later worked as an assistant coach for Central Methodist University, an NAIA program in Fayette, Missouri.

Levett’s new school was one of the best teams in Region XVI of the NJCAA in 2021, posting an 18-6 record and reaching the region championship game. MACC has reached the National Tournament 16 times, winning the national championship in 1982.

“I’m excited to join a powerhouse junior college program like Moberly Area CC,” Levett said. “I plan on helping them get back to Lubbock, Texas, [where the national tournament is held] in 2022!”

Though Levett looks forward to his new endeavor and being closer to family, he will miss various aspects of life in Powell, and he appreciates everyone who bought into Trapper women’s basketball during his tenure.

“We have absolutely loved our time in Powell and have made lifelong friends here,” Levett said. “We will be tourists soon to visit our favorite places and people.”

He added a thank you “to everyone in the community who supports Trapper athletics.”

“There have been many outstanding student-athletes who have represented NWC at the highest level. I hope this community continues to back its athletic teams, as it brings people together and creates a fun environment throughout the campus,” Levett said.

With the women’s basketball coach leaving Powell in the coming weeks, the search has begun for his replacement.

“We’re looking for an interim coach to get someone in place,” Erickson said. “We need someone who can step in quickly and build relationships with the kids.”