His first impression was, it would be “a lot of work,” he recalled during a recent interview at his home, where he still lives on the farm more than 66 years later.

Allen grew up on a sheep ranch in Ryegate, Mont., and was no stranger to … 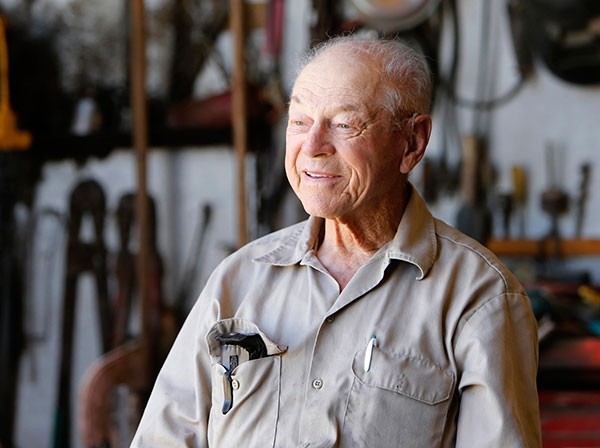 Forrest Allen chats while standing in his shop, where he has made many repairs and wood projects over the years. Allen donated $1 million to the Northwest College Foundation last summer.
Photo courtesy Daniel Baney, Northwest College
Posted Tuesday, January 20, 2015 3:34 pm
By Ilene Olson

As he looked over his new homestead between Powell and Cody on a snowy day in 1948, Forrest Allen knew he was poised at the edge of a new life.

His first impression was, it would be “a lot of work,” he recalled during a recent interview at his home, where he still lives on the farm more than 66 years later.

Allen grew up on a sheep ranch in Ryegate, Mont., and was no stranger to working hard to make a living off the land. Eventually, his hard work and frugal living would enable him to make a $1 million donation to the Northwest College Foundation to fund scholarships for the NWC agriculture program. Allen made that donation last summer.

But he never could have guessed at that future as he stood beside the the highway looking over his sagebrush-strewn, 120-acre homestead that day.

After serving as a flight engineer during World War II, Allen came back to the states and put his name in a U.S. Bureau of Reclamation drawing for homesteads near Heart Mountain.

“I think our filing fee was a dollar and a quarter,” he said. “But we had to raise a factory crop on 50 percent of the irrigable land, and have a dwelling on it.”

Allen then traveled with his father to the Heart Mountain area to choose a homestead. He looked at a map and selected No. 89, the last section available along the Powell-Cody Highway. Neighboring homesteads had been claimed in the first drawing, which took place a year earlier.

“There was some legal water rights issues with the school section down here, and they had to get those straightened out before they could let it out,” he said.

The proximity to the highway was desirable because it made getting around easier in the winter, and he guessed it might make the property more valuable. Though he didn’t know it at the time, the homestead’s location had an additional advantage, as it was in a place that often seemed favored by Mother Nature.

“The first thing we (Allen and his father) done is moved a barracks out (of the internment camp) to get a place to live,” he said. “We  got two barracks from the camp. Then we had to saw them in half. They were 120 foot (long), so we just took a hand saw and cut ’em in half (widthwise) ... and take the skirting and chimney off.

“I just opened the door, and that was my living area till we got something better built.”

“He had no electricity, gas or phone, just a dogged determination to farm the land,” according to a NWC press release.

Much of the homestead was covered by sagebrush. Allen got a root cutter from the Bureau of Reclamation and used it to remove sagebrush from the ground.

“Then we had to rake it and burn it,” he told the Tribune.

But about 35 to 40 acres of the homestead had been farmed previously by Japanese internees at Heart Mountain, making it easier for him to put in his first crop. He planted peas, oats and barley there that first year, and the crop “done all right.”

In fact, “It was the top crop that Associated Seed Growers had that year,” he added.

That was a dramatic improvement from earlier in the summer, when the clouds opened up and rained for a week after Allen had just irrigated. The excess moisture caused the crop to turn a sickly yellow.

“They figured it was a total loss,” he said, “and it turned out to be their best crop. I guess the experts don’t know everything.”

Later, he mostly grew hay and grain, such as barley.

While Allen’s crops generally were successful, he faced his share of challenges. One stands out in particular.

He had his shop and his house together. A spark from a welder started a fire in the shop, and it quickly spread to his house, consuming both.

“I timed it just right,” he said. “I burned it the day before they got the first fire truck. ... The fire district had a pump, but it was Sunday, and it was locked up in a garage.”

The fire occurred in the middle of the summer, and he didn’t have time to build a new home.

“I just moved over into one of the other buildings,” he said.

“The government declared these units too small to make a living on, so they gave us more land,” he said.

“That increased my acreage by 50 percent,” he said. “That makes quite a difference.”

Also in 1955, Allen decided to travel back to Columbus, Ohio, to visit Alma Ottilli, with whom he had corresponded since they met in Columbus 13 years earlier. Allen was stationed in Columbus in 1942 with the Army Air Corps while attending aircraft engine school.

He and a friend, Clyde Dawson, were downtown one Sunday afternoon, and “I got picked up on the street,” Allen said.

“This young lady come up and says, ‘You want to go out to eat?’”

Then she assured him, “It’s all right — my mother’s there.”

Allen said he later learned that a local church had invited a bunch of soldiers at the Lockbourne Air Base to dinner that Sunday, “but they got shipped out the day before. So the preacher said, ‘Just go down the street and pick up a bunch of soldiers.’ So that’s what they done.”

The young woman’s mother “picked us up, and we went out to their home for Sunday dinner. ... “That’s where I met Alma,” who was cooking at home when her sister picked him up.

Alma’s sister ended up marrying Dawson, who was transferred later to Akron, Ohio.

“Those two got together, but (Alma and) I didn’t,” Allen said.

That changed when Allen went back to see Alma again in 1955, and the couple married in 1956. He brought his bride to a new home on the farm, which he built from the ground up, starting with the materials.

“I sawed the trees down” in Montana, he said, and later, Allen, with the help of his parents and his brother, converted the trees into lumber.

Allen said he never had a complete crop loss. He attributes that partly to luck and cooperative weather.

“This area right in this particular area, the storms go around us,” he said. “They stop at the (Corbett) bridge up there. Then hailstorms will hit along the top of this bench in back of us here. They’ve lost several crops up there, and we didn’t get any big loss.”

He recalled one year when “the rain stopped at my north fence all summer,” while his neighbor got little rain.

“It would rain on mine, and he would have to irrigate,” Allen said.

“I’ve done custom work for over 60 years,” he said. “I don’t think anybody else has done it that long.

“Most of them start up for two or three years, and they give it up, They think it’s big money, and it isn’t.”

But it is a good income and a help to neighbors, Allen said.

“The last 10 to 15 years here, it was more of a community service than a business, as far as making money out of it, but these little places just can’t get anybody to farm,” he said. “And some of them, when I quit, they quit farming. They just let their place grow to weeds.”

Allen, 93 and “pushing 94,” credited his long life to good health and hard work.

“You sit around much, and it seems you disappear pretty quick,” he said. But, he added, “You probably can’t change your destination date.”

While his agriculture losses were minimal, Allen’s personal losses were considerable. Alma died in 1982, and the couple never had any children.

“No, not at my age,” he said. “It just doesn’t make sense. ... I just keep busy around the place here, making things and maintaining it. I do woodworking, everything from an earring to a house.”

Through his woodworking skills, Allen has beautified his home with wooden cabinets, furniture, picture frames and vases, among other things. One of his favorite pieces is a beautiful hand-made cradle in the downstairs guest room, built for a step-grandchild. The cradle is suspended on a rocker stand, and ball bearings let it rock smoothly for several minutes after a small push.

“I always tried to make something for the grandkids for Christmas rather than buying something,” he said. “Something that they can carry down over the years. When they get kids, they can say, ‘Well, my grandpa made that.’”

By farming his land, doing custom work, living conservatively and with added help from an inheritance, Allen’s savings grew to the point that he was able to make the $1 million to the Northwest College Foundation last summer.

The state of Wyoming matched that gift, raising the total amount to $2 million. That money went into an endowment trust fund, and interest from it will pay for annual scholarships to benefit students in the NWC agriculture program.

Allen visited with agriculture students at the college recently.

“When Forrest came to our class, he talked about the farm equipment he used,” student Leigha Hansen said in a video filmed for the foundation about Allen’s visit and donation. “I thought that was really cool, because growing up on a farm, my siblings and I did a lot of the same work. ... It seemed like simple work, but it was hard, because we worked from morning to night. And I know that Forrest had to do the same thing, and I see that work in him.”

Farming still is a lot of hard work, with a lot of hours put in. But it’s harder for small farmers to succeed today than it was for him, Allen said.

“When I started out, you could do it individually, with a family,” he said. “Today, it’s more of a commercial business. It’s got its good points and it’s got its bad points. ... By going to the big farms, you can probably get a little more efficiency out of it.