The sentiment of the post is clear, but the bear in the photo was a blonde phase black bear cub, according to Montana and Wyoming officials. 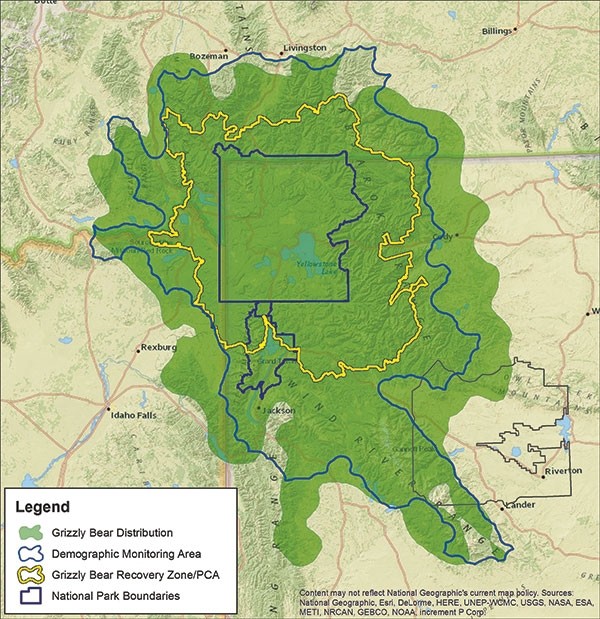 A recent post on Facebook showed a picture of a “grizzly” that was hit by a car on U.S. Highway 310 near Warren, Montana, north of Frannie. The post stated, “[Too] many bears — watch out Big Horn Mountains!!”

The sentiment of the post is clear, but the bear in the photo was a blonde phase black bear cub, according to Montana and Wyoming officials.

Dan Bjornlie, Wyoming Game and Fish Department large carnivore biologist, said there is no documentation of grizzly in the Big Horn Mountain range, but they’re not far from there.

For many, the expansion of grizzly bears is troubling. And conflict resolution is a big part of the job for the state’s big carnivore biologists.

Friday afternoon, a grizzly was trapped and relocated after it was found frequenting farm land east of Heart Mountain. Bears are known to inhabit the area and have been seen in Ralston. Three grizzlies drowned in the canal east of Heart Mountain last year, according to Brian Peters of The Nature Conservancy’s Heart Mountain Ranch Preserve. The canal has cement sides, and the bears get into the fast-moving water and can’t get out, said Bjornlie.

While bears are generally welcome in the Greater Yellowstone Ecosystem, they now are expanding beyond what biologists refer to as a suitable habitat line, close to high human activity. The large carnivores have been breeding successfully and moving to new places like the south end of Wind River and into Western Montana, Bjornlie said.

“They have spread to places where 10 years ago it was unheard of, but now it’s not uncommon,” Bjornlie said.

Poaching can also be a problem for the species.

A grizzly was reported as having been killed on May 19 in the Dick Creek area southwest of Meeteetse — officials from the U.S. Fish and Wildlife Service are investigating — and the Montana Fish, Wildlife and Parks and Fish and Wildlife are currently seeking information on the shooting death of a boar grizzly bear found in the Clearwater River on May 28, west of Whitefish in northwest Montana.

The Fish and Wildlife Service has been preparing a proposal to delist grizzly bears from the endangered species list to allow the states of Montana, Idaho and Wyoming to manage the species. The species was designated as threatened with extinction in 1975. Since then, the population has grown from less than 140 to the current population of more than 700 in the Greater Yellowstone Ecosystem.

If delisted, the states will be free to open hunting seasons on grizzly bears outside of Yellowstone National Park.