When Cecil and Bridget Gallagher decided to open a corn maze on their Clark property, safety was one of their main concerns. Inviting the public to your farm has risks. But they never thought … 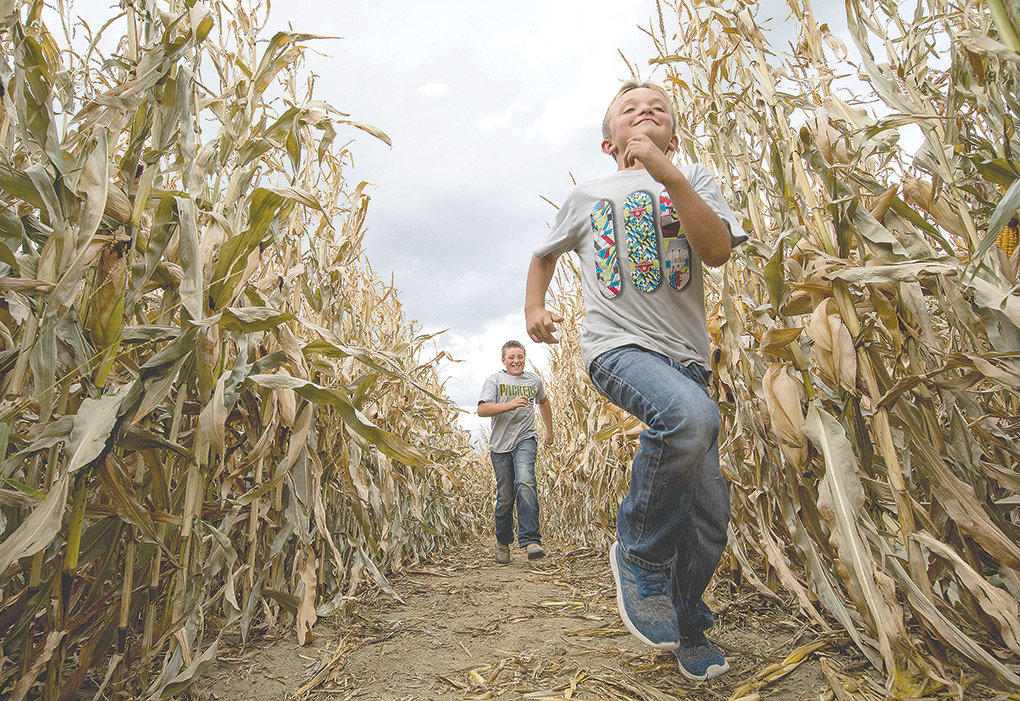 Tate and Joe Gallagher run through their family’s corn maze in Clark on Tuesday. Grizzly bears were found in the area on Friday, but the property has since been given the all clear. Gallagher’s Corn Maze and Pumpkin Patch — now protected by an electric fence — is set to be open for business this weekend.
Tribune photo by Mark Davis 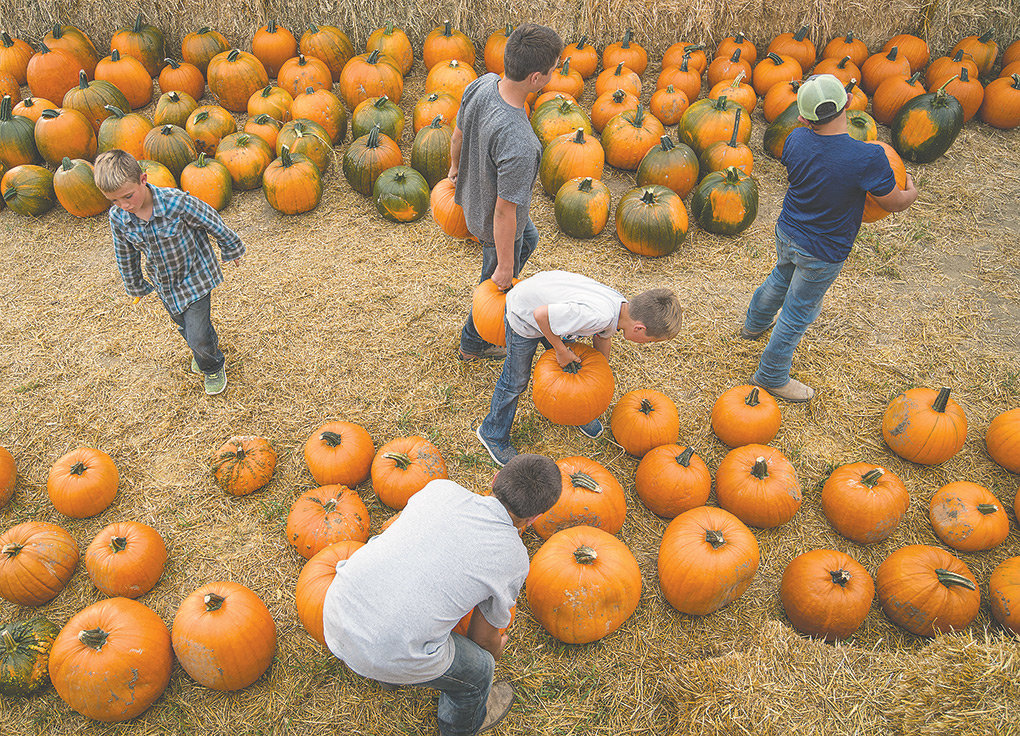 Ty, Hunter, Joe, Tate, and Zach Gallagher get ready to reopen Gallagher’s Corn Maze and Pumpkin Patch after grizzlies got into the family’s corn, prompting a temporary closure of the nearby maze. The maze, now surrounded by a new electric fence, is open Fridays through Sundays through October.
Tribune photo by Mark Davis
Previous Next
Posted Thursday, October 4, 2018 8:05 am
By Mark Davis

When Cecil and Bridget Gallagher decided to open a corn maze on their Clark property, safety was one of their main concerns. Inviting the public to your farm has risks. But they never thought grizzlies would be one of them.

Cecil, co-owner of Gallagher’s Corn Maze and Pumpkin Patch, was walking the perimeter of the property Friday morning when he found several sets of large tracks and bear scat. The Gallaghers immediately closed the business and called the Wyoming Game and Fish Department. The tracks were that of a grizzly sow and her cubs. The family of bears weren’t in the maze, but they were on the 600-acre farm.

“Safety is very important to us. We treat every kid that visits like we treat our own,” Bridget said as the family prepared to reopen for the weekend, after making several safety upgrades.

“If we wouldn’t send our own kids out there, we’re not going to let anybody else,” she said; family is everything to the Gallaghers, who have nine children.

Large carnivore biologists from Game and Fish came and set up traps, capturing and moving a few bears, Cecil said.

Then the Gallagher clan rolled up their sleeves and built an electric fence around the property. The maze has been open four seasons, but this has been the first real challenge to the business model that the couple has faced.

“There’s always a chance in Clark you’re going to have some bears, but we watch the perimeter looking for signs, looking for scat and tracks. We saw all that last Friday morning,” Cecil said. “We immediately decided to pull the plug temporarily and do what we could to prevent the problem. There’s not enough money in the [Big Horn] Basin to make this worth it if somebody gets hurt.”

Four officials from the Game and Fish came back to the farm Tuesday morning and searched the property by foot and by drone, declaring the all clear. The maze is set to stay open through October.

The new fence is meant to keep grizzlies away, as bears hate electric fencing. Tests in Alaska have shown they won’t cross the fence to get to a food reward, let alone dried corn, Cecil said.

As grizzlies continue to move out of prime habitat searching for a home, conflicts like the Gallagher family experienced are becoming the new norm.

The many wilderness areas in northwest Wyoming are prime habitat for grizzlies, said Brian Nesvik, Game and Fish head game warden and director of the wildlife division. Now, with populations increasing, the species is spilling into less than ideal habitat outside an area known as the demographic monitoring area (DMA). Inside the area, bears are generally welcome. Outside the DMA, where conflicts are plentiful, they are increasingly causing problems.

“They’re not bears that just left the demographic monitoring area one day, leaving a vacant spot. These are bears that are occupying habitats outside of the DMA because the DMA is full,” Nesvik said.

Last month, as Nesvik scrambled through the rocks and inclines of the backcountry between the North and South forks of the Shoshone River, chasing bighorn sheep, he lost one of the most important tools for those willing to accept the challenge to hunt the area: his bear spray.

“It fell out of the holster. I can’t say when or where,” he said. “If I didn’t have a firearm, I wouldn’t have had any backup.”

“We’ve had several reports of people having them in close all over northwest Wyoming in the past week,” Nesvik said.

Some have been forced to deploy bear spray, including two cases in the past week in Teton County. An attack the previous week turned deadly for a Jackson-area guide. Grizzlies have also been photographed eating cat food on the back porch of a residence in Wapiti, temporarily closed the corn maze and are being seen more frequently in communities east of Cody.

“We’re seeing a lot of conflicts all at once. This is the month bears are looking for high calorie food to get ready to hibernate. Expect to see bears in places you wouldn’t expect,” Nesvik warned.

“Most people probably don’t expect to see a grizzly in a cornfield or places away from the forest where there’s not a tree for miles. But people need to be ready,” he said. Grizzlies continue to find new habitat in the state, he added. “The map shows how they continue to occupy new territory every year.”

Meanwhile, with hunting season in full swing, more people are in wilderness areas and conflicts with bears are increasing.

The father/daughter team of Bruce and Kristie Salzmann of Cody had a sub-adult male challenge them for a deer while hunting in the South Fork.

“It was scary,” said Kristie, who is the public affairs officer for the Shoshone National Forest.

On Tuesday morning, an employee of Park County Commissioner Lee Livingston’s outfitting business shot and killed a charging grizzly in the upper South Fork. The hunting party had harvested an elk and was in the process of butchering the animal when a grizzly charged the group’s horses, said Livingston, who was attending a commission meeting at the time. He said the group chased the bear off and went back to the work on the elk on “high alert,” when “one of the hunters hollered that, ‘Here comes the bear.’”

The grizzly was shot dead.

“The way the bear was coming in, [the guide] knew [the bear] was coming to take the elk, and they really had no where to go,” Livingston said, adding, “When those bears circle round and get the high ground on you, then they start meaning business.”

The outfitter said he knows and explains to his clients that they’re hunting in grizzly bear country. And if a grizzly claims a downed elk before hunters can get to it, they let the bear have it, he said.

“There’s not any chunk of elk meat or set of antlers worth getting a bear or a person killed or injured,” Livingston said.

Nesvik suggests those traveling or working in bear habitat carry bear spray or a firearm. Preferably both, he said.

“Hunters need to make bear safety their highest priority. Moving quietly through timber in the middle of the day when bears are bedded down is not a safe way to go,” he said. “I recommend people carry both [spray and a firearm]. There are situations where one may be better than the other and it’s good to have a backup.”

If staying in bear habitat, don’t give the animals a chance to find a food reward — such as camp food, cat food on the porch, bird seed or a used grill full of yummy smells. Bears still may come to investigate a campsite or cabin, but if they don’t find food, they’re unlikely to come back, Nesvik said.

Nesvik pledges to do all the Game and Fish can to help resolve conflicts regardless of who has management responsibilities. But a federal court decision late last month moved grizzlies back under federal protections under the U.S. Fish and Wildlife Service. Now Game and Fish biologists have to clear all management decisions with federal agents, Nesvik said.

“We’ll make recommendations and work with the U.S. Fish and Wildlife Service, but at the end of the day, a person that works for the federal government and doesn’t live in Wyoming is going to make the decisions on how we ultimately resolve conflicts,” he said.

Cody ecologist Chuck Neal agrees conflicts are on the rise, but he said it’s natural as bears feed for hibernation.

“They have an agenda: The Game and Fish want to keep the anxiety factor as high as possible,” Neal said Wednesday. “A tool was taken from them and they resent losing the opportunity to kill a few bears.”

Neal said as long as increasing numbers of people move into grizzly ecosystem, conflicts will be on the rise.

Nesvik said safety is his main concern. His recommendation for a firearm: “A larger caliber is better, but people need to be comfortable shooting it or it’s no better than a paper weight.”

Handguns of 9mm and .40 caliber are on the small end, Nesvik said. But not everyone can accurately handle a .44 Magnum or larger.