The Powell business, now in its 12th year, was founded with the sole purpose of providing gluten-free oats products for the percentage of the population that suffers from celiac disease. The mission is personal for Seaton Smith and his son Forrest … 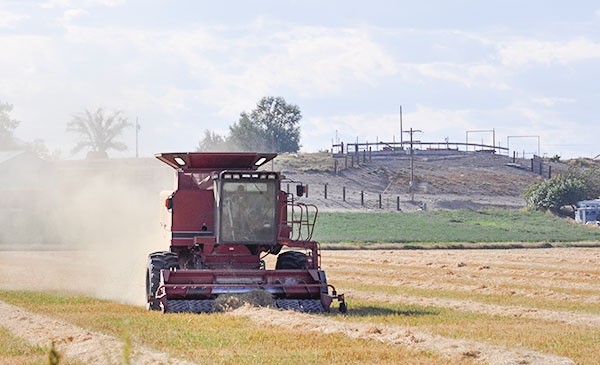 Gluten-free oats are harvested east of Powell in September. Last year, Gluten Free Oats grew more oats locally than ever — 1,200 acres. The majority of those oats are still in storage. The Powell company may not be contracting acreage in 2016, but that decision is not final yet.
Tribune file photo by Tessa Schweigert
Posted Monday, March 28, 2016 4:58 pm
By Dave Bonner

Planting of 2016 crop tentatively on hold

Not all gluten-free oats are created equally.

It’s a reality that has roiled the marketplace for a Powell company, Gluten Free Oats, and its GF Harvest branded oats products.

The Powell business, now in its 12th year, was founded with the sole purpose of providing gluten-free oats products for the percentage of the population that suffers from celiac disease. The mission is personal for Seaton Smith and his son Forrest Smith, who is credited with the vision for the gluten-free oats start-up as a high school FFA entrepreneurial project.

Gluten is a protein in grain. Common foods containing gluten are pastas, noodles, breads and pastries, cereals and crackers.

First in the nation

Commitment by “our celiac family” led to the development of the first certified gluten-free oat mill in the United States, said Seaton Smith. The mill, warehouse and packaging facilities are located at 1030 Washington St. in Powell.

“We got into this to serve kids who have a real need of gluten-free, or they get sick,” said Smith. “Our goal was not to say, ‘let’s turn this into a business.’ We started this as a family affected by celiac disease who wanted to serve  people who had a real need.”

Now in a world of increasing competition, there’s some question about what is really gluten-free.

In a nutshell, the words “gluten free” on a box on the supermarket shelf don’t always tell the whole story, Smith contends.

The 2013 federal Food and Drug Administration (FDA) product labeling rule is in the middle of the controversy. The FDA has established that a product can be labeled gluten-free if the product has been processed to remove the gluten and tested to below 20 parts per million (ppm) of gluten.

The gluten-free standard applied to the Smiths’ certified gluten-free products is more stringent — in fact, twice as stringent.

To earn approval of the Gluten-Free Certification Organization, the body which certifies Gluten Free Oats of Powell, all finished products using the GFCO logo must contain no more than 10 ppm of gluten.

The gluten-free market has attracted some of the major food product companies in the world, including General Mills and Quaker Oats.

The big guys say they’ve figured out a way to be “gluten-free” by meeting the FDA standard of 20 ppm of gluten through averaging or blending, Smith said.

“Bottom line is that a company can buy common commodity oats, per the new FDA standard, and show some kind of gluten testing at least one time a year to be able to call them gluten-free. FDA does not state that the 20 ppm is on a single slice of bread, a serving of two slices, the whole loaf, or the 100,000-pound batch of dough used to make the bread. The standard is very loose,” he said.

At the 2014 conference of the American Association of Cereal Chemist Institute (AACCI), one manufacturer said they were using sorting equipment on

“They also stated that on average, 10 percent of their samples were testing over 20 ppm, but by using a statistical average, they were able to meet the FDA standard,” he said.

“This kind of leeway will result in a lot of people being at risk of eating gluten when the package says gluten-free,” Smith emphasized.

In contrast, Smith said the oats in his company’s procedures are certified to 10 ppm of gluten or less. The company follows a strict “purity protocol” from seed to finished product.

• All equipment inspected and approved for gluten-free production;

• Each field inspected prior to harvest by the company and a third party;

• Processed in a dedicated and certified gluten-free oat mill;

• Packaged on a dedicated and certified gluten-free packaging line;

Gluten Free Oats attended the 2016 Natural Products Expo West conference in Anaheim, California, in mid-March. This is “the food show of the world” with 70,000 attendees, Smith said, and provided the opportunity to network with other companies — anyone making a product for the food industry.

Smith said he and his company representatives would be making a particular push to tell the story for fully certified gluten-free oats and the product lines of GF Harvest and Canyon Oats.

He acknowledged that it would be an attempt to turn aside the competitive challenge by companies marketing gluten-free under the less stringent standard of 20 ppm.

“Competition is a good thing,” Smith said. “We thought the companies who wanted true gluten-free would stay with us. We expected there would be a bump in the road, then the true gluten-free market would take off again.”

The reality is Smith and Gluten Free Oats are still waiting for that to happen. The competition can put its product on the market for less cost without following the strict purity protocols from field to finished product.

That puts a premium on marketing the advantages of fully certified gluten-free.

“We still have a majority of that product in storage,” Smith said. “Because we still have oats on hand, I went personally to see every grower and told them where we’re at. I said you need to think of something else as a crop for a year because we may not be contracting acreage in 2016.”

That decision is not final yet.

“To affect the grower community, we need to sway some large manufacturing companies that cheaper is not always better and to start buying from us again,” Smith summed up. “I’m going to be optimistic. We will know in two to three weeks if we see a market that we can offer growing contracts. At that time, we may be able to come back to growers if they have land left.”

What if the experience goes badly for Gluten Free Oats at Expo West?

“I’m not a quitter,” Smith said. “The company may have to retool itself, and that is already something being considered.”

Rather than the conventional large bulk market, the company may go after the retail product line by better educating doctors and dieticians that serve the pure gluten-free niche markets.

Gluten Free Oats is not going to sacrifice its standards and come off a strict certified base, Smith said.

“The company has always been on the leading edge of the market. The product is in the bins, ready to use, and we can employ people,” he stressed.

Gluten Free Oats can be creative. A new Go-Pack of oatmeal is being introduced to focus for the first time on the outdoor market. The Go-Pack is saddlebag and backpack ready to travel without being crushed.

They announced the new Go-Pack package line this year that is a giant hit for the latest in convenience products.

Gluten Free Oats has enough oats in storage to make the product and market it for a year and a half.

“The new Go-Pack is debuting in four flavors. You tear off the top of this flat package, pooch it up to become a cup and add hot water,” Smith said. “This new Go-Pack will stand up to handling, and we can do it more efficiently.”

Gluten Free Oats has done some streamlining since the first of the year. Two jobs have been eliminated, but the company still employs 15 people.

Smith advised everyone who is required to be on a gluten-free diet to refrain from eating a food product that just has the words “gluten free” on it. Without third party certification, there should be fear of cross-contamination, he said.

“It hurts my heart to see people buy what they think are gluten-free products, and are marketed as gluten-free, but they aren’t. We don’t want a person who needs gluten-free to have a problem,” he said.