From ‘box of bones,’ to honored veteran

A river of tears ran down Shelley Statler’s rosy cheeks, as members of the Army National Guard Honor Guard presented her with the American flag from atop her grandfather’s coffin. Statler …

From ‘box of bones,’ to honored veteran 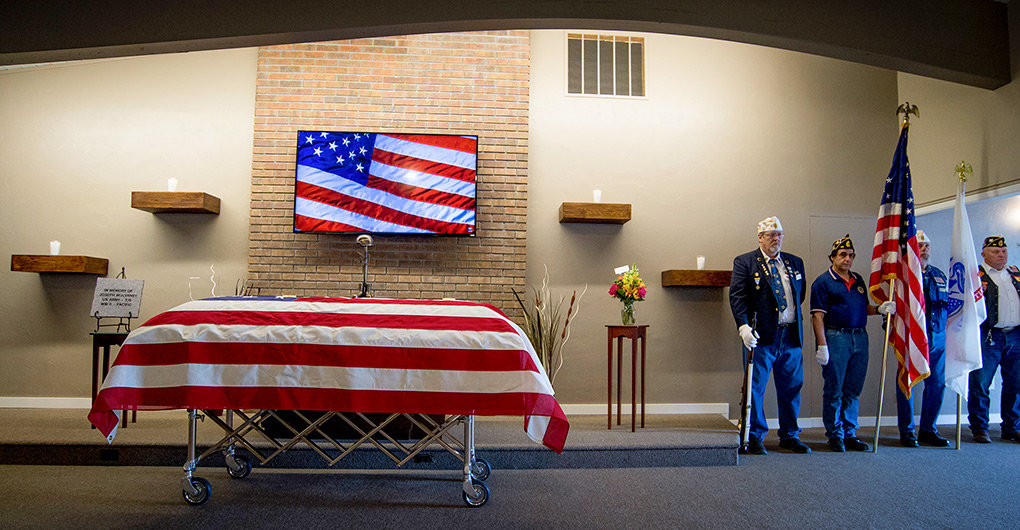 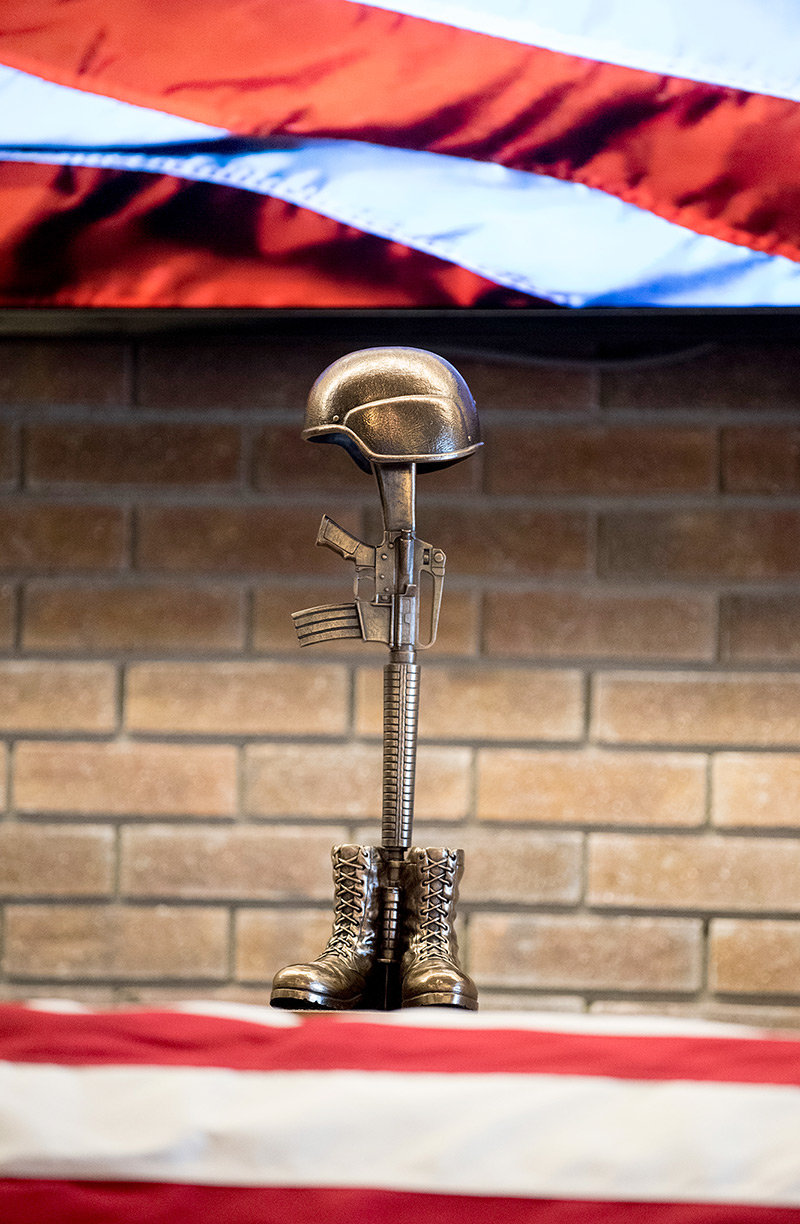 A sculpture of a military soldier Battle Cross is placed behind the casket of Joseph. J. Mulvaney, who was murdered in 1963 after serving in the Army in World War II.
Tribune photo by Mark Davis 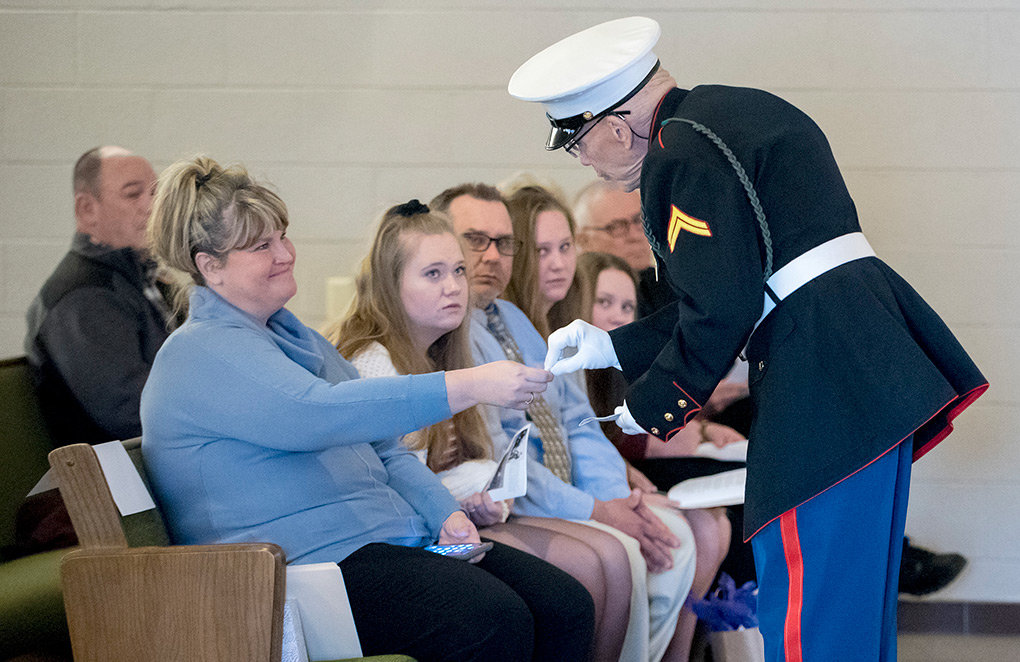 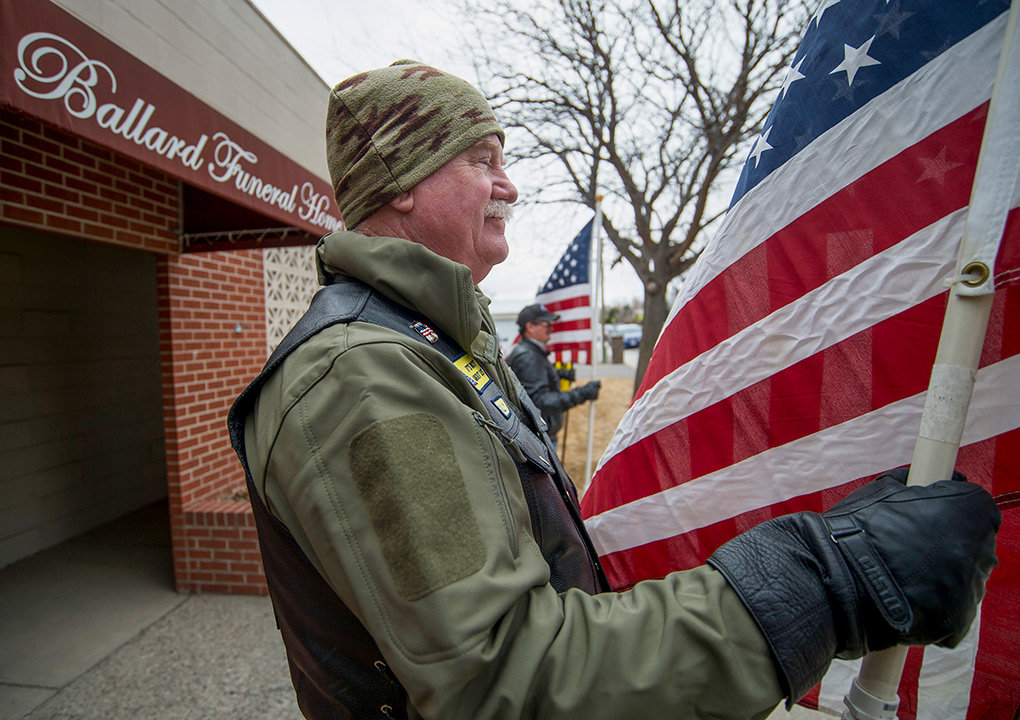 Sully Sullivan, of the Patriot Guard Riders, stands post with the American flag in hand outside Ballard Funeral Home in Cody Friday.
Tribune photo by Mark Davis
Previous Next
Posted Tuesday, April 2, 2019 8:05 am
By Mark Davis

A river of tears ran down Shelley Statler’s rosy cheeks, as members of the Army National Guard Honor Guard presented her with the American flag from atop her grandfather’s coffin. Statler had never met her grandfather, growing up knowing his name but nothing else about him.

Joseph J. Mulvaney disappeared in 1963. It wouldn’t be until late in 2017 that Statler would learn what had become of him.

The missing veteran had been shot in the eye with a .25 caliber bullet and buried in an unmarked grave in Iowa. Sometime later, he was dug up and put in a steamer trunk, toted from state to state and eventually forgotten — left to rot in Thermopolis.

It took nearly 30 years to discover a crime had occurred, when Mulvaney’s remains were discovered by Hot Springs County authorities. But it took another 24 years to identify the man in the “Box of Bones” — and for the past 18 months, Mulvaney’s bones stayed in an evidence locker in Thermopolis while his family pleaded with Iowa law enforcement for his remains to be released.

With the help of three Hot Springs County sheriffs, Mulvaney’s granddaughter and a few new friends in the Cody area, Mulvaney’s remains have finally been removed from the unceremonious box where he had been stowed for so many years.

He received full military funeral honors for his service in World War II during a Friday ceremony at Ballard Funeral Home in Cody.

Deacon Rick Moser gave the eulogy in front of dozens in attendance, most of them veterans themselves.

“We can treat Joseph [Mulvaney] as a hero, as a returning veteran, as a warrior,” Moser said. “We can say goodbye, and [he] can hear us say goodbye to him. He’s been waiting to lie beneath the stars and stripes of this country’s flag and to hear a 21-gun salute in his honor. He’s been waiting to hear our prayers for the tolls of his soul and finally to be taken home to his place of rest.”

Many of Mulvaney’s remaining family members traveled from the Des Moines, Iowa, area to witness his dignity being restored.

“I was afraid he was going to be in that box for rest of my life,” Statler said. “I just wanted him home with us.”

Now, Mulvaney finally has his name back and has been returned home, 1,000 miles from where he was found; decades after being murdered, Mulvaney has received his due and his family is at peace.

Yet the mystery behind his murder and eventual discovery continues — questions that most likely will never be answered. Finding her grandfather was somewhat of a miracle for Statler.

In 1986, John “Gabby” Morris was moving and asked if he could leave some
possessions behind with his buddy, Thermopolis resident Newell Sessions. In 1992, unable to reach Morris, Sessions pried open the box to find an almost full skeleton in scattered pieces. Morris, prompted by his wife, then called sheriff John Lumley.

Learning the box of bones was a murder victim, Lumley soon flew to Texas to interview Morris. “He wasn’t cooperative,” Lumley said.

Morris had moved around the country most of his life and claimed he had purchased the steamer trunk at a yard sale. But he couldn’t remember where. Morris told Lumley he had tried to get the steamer open when he first bought it, but was unsuccessful and never tried again. What was in the trunk was a mystery to him, he told Lumley.

“I called him a liar,” Lumley said before Friday’s ceremony. “Nobody is going to believe you moved a trunk that you bought at a yard sale several times without opening it to see what was inside.”

Lumley contacted the Wyoming Division of Criminal Investigation for help. The remains were transported to Cheyenne, where DNA samples were taken and Sandy Mays, former crime lab supervisor, developed a sketch of Mulvaney’s skull. From there, the sketches and story were picked up by the television series Unsolved Mysteries in 1993. In the meantime, Morris died by suicide.

The show aired several times before catching the eye of Statler. The sketch of the victim, shown on the broadcast, resembled her missing grandfather. From that moment, she was relentless in pursuing the truth.

“The likeness [Mays] was able to obtain from the skull of the deceased victim was uncanny,” Lumley said, praising her work.

As for Statler, who figured out the sketch was of her grandfather, “I call her detective Shelley,” Lumley said. “This could have gone unknown indefinitely if not for her.”

Mulvaney’s granddaughter wasn’t alone in the search. Lumley’s successor, Lou Falgoust, enlisted then-deputy Jerimie Kraushaar to continue investigating the crime. Kraushaar, who has since replaced Falgoust as sheriff, contacted DCI several times as DNA technology improved before a good sample could be collected.

Statler sent samples of DNA from her family and testing confirmed the bones were Mulvaney’s in October 2017. But Hot Springs County authorities and the family still had to wait for Iowa to take the lead on the case before the body could be released. Proving the murder happened in Iowa and locating the original burial place was the sticking point with the Des Moines Police Department, Statler said.

Sheriff Kraushaar said he continued to push the issue for the family’s sake.

“It was hard,” he said, but Iowa authorities eventually released Mulvaney’s remains.

Finally able to schedule a service, Statler, her husband Ron, and their children — Kaylee, Jenna and Brittany — made the two-day trip to Cody. They chose the city for the memorial due to the help of Jona Vanata, a Marine Corps. veteran who operates Families on the Frontline, and Ballard Funeral Home Manager Cody Gortmaker.

Big Horn Basin Patriot Guard Riders stood at the front of the funeral home, posting American Flags that flapped wildly in a cold wind. Representatives from the Hughes Pittinger American Legion Post 26 in Powell, and other posts across the state were on hand to honor Mulvaney for his service to the country. His coffin was draped in an American flag and the Army National Guard Honor Guard performed the veteran rites and 21-gun salute.

Statler was all smiles after the service, embracing all who helped give Joseph Mulvaney back his name.

“It’s amazing that I get to bring him home and I got to see everybody here to support my grandfather,” she said. “I’ve made a lot of friends this past year and a half; a lot of people have helped me and none of us ever knew my grandfather.”