The identity of the “finder” of Forrest Fenn’s famed treasure has been revealed as Jack Stuef, a 32-year-old Michigan resident, though the location remains a mystery. 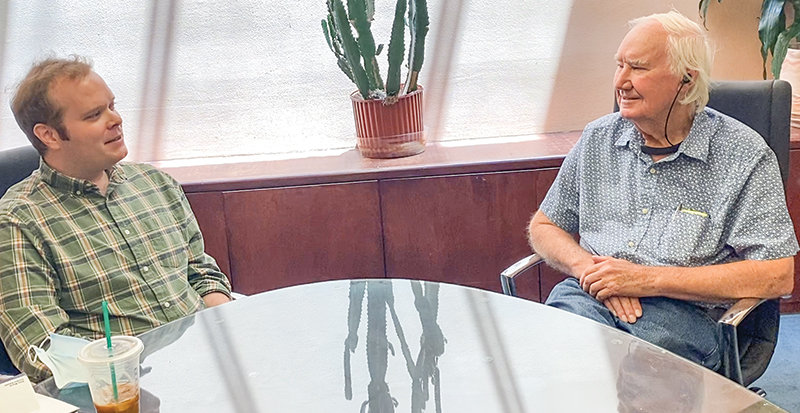 To help prove his status as the finder of Forrest Fenn’s famed treasure, Jack Stuef (left) posted this photo of himself meeting with Fenn earlier in the year. But despite the evidence Stuef has provided, some hunters remain skeptical.
Courtesy photo 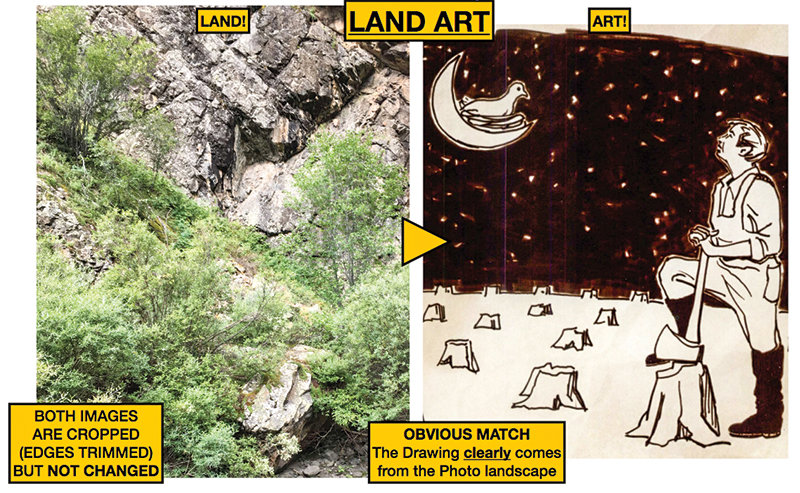 Brian Erskine of Arizona has included portions of his Fenn treasure ‘solve’ — including a comparison between a photo he took in Colorado and an illustration from one of Forrest Fenn’s books — in court filings, as Erskine remains convinced he should be awarded the gold.
Courtesy image
Previous Next
Posted Tuesday, December 15, 2020 8:15 am
By Mark Davis

The identity of the “finder” of Forrest Fenn’s famed treasure has been revealed as Jack Stuef, a 32-year-old Michigan resident, though the location remains a mystery.

“I retrieved the treasure from the place I found it in Wyoming, the same place Forrest hid it 10 years ago. I now own the treasure chest,” Stuef said in a statement last week.

He reportedly found the cache of valuables in June.

“For the past six months, I have remained anonymous,” Stuef said, “not because I have anything to hide, but because Forrest and his family endured stalkers, death threats, home invasions, frivolous lawsuits and a potential kidnapping — all at the hands of people with delusions related to his treasure. I don’t want those things to happen to me and my family.”

In response to a lawsuit from an unhappy treasure hunter from Chicago, a judge in the U.S. District Court for New Mexico ruled that Fenn’s estate would have to identify the finder. Stuef said the disclosure was going to make his name a matter of public record — his identity was ultimately disclosed in a Dec. 8 court filing — so he chose to come forward.

Stuef said the lawsuit is an abuse of the courts.

“I am the legitimate finder and owner of the treasure, and no person has any remotely valid claim against me. In the case in New Mexico, many bizarre, false, baseless and defamatory allegations have been made against me,” he said.

Stuef is a one-time writer who — after becoming embroiled in controversy for making jokes about one of former vice presidential candidate Sarah Palin’s children having Down syndrome — left journalism to begin a career in medicine.

In an interview with Daniel Barbarisi in Outside Magazine, Stuef admitted to being obsessed with hunting for the treasure, finding it on June 6 in an undisclosed location in Wyoming. “I’ve probably thought about it for at least a couple hours a day, every day, since I learned about it,” Stuef told Outside Magazine. “Every day.”

“I think I got a little embarrassed by how obsessed I was with it,” he added. “If I didn’t find it, I would look kind of like an idiot. And maybe I didn’t want to admit to myself what a hold it had on me.”

Fenn died in September, but he announced the treasure’s discovery in July, ending a hunt he started in 2010, when he published a clue-filled poem.

“Because I promised the finder I would not reveal who found it or where, I have remained mostly silent,” Fenn said, but he disclosed that the location was somewhere in Wyoming.

Stuef has similarly refused to reveal the spot, saying that if he did, “the natural wonder of [a] place that Forrest held so dear will be destroyed by people seeking treasure they hope I dropped on my way out or Forrest on his way in.”

He added that the “wilderness location” is “not an appropriate place to become a tourist attraction.” Stuef said the spot can be dangerous when people don’t take basic precautions or go in the wrong conditions.

Over the years, several people died while looking for the Fenn treasure, including one man who fell to his death in Yellowstone National Park. Others ran into other trouble, including a Virginia couple who repeatedly got lost in the North Fork area, an Indiana man who illegally rappelled into the Grand Canyon of the Yellowstone River in January and a Utah man who allegedly dug up parts of the historic Fort Yellowstone Cemetery in May.

And the obsession with the hunt hasn’t ended, as many searchers of the treasure remain unconvinced it was actually found.

Conspiracy theories abound within searcher groups. Many think the treasure was never hidden and only came out when Fenn’s health was failing — to give him a proper ending; Fenn died in September. Others claim photos showing Fenn with Stuef were doctored, or “photoshopped.” One searcher even suggested, by showing video of Fenn through the years, that the late art dealer has a body double or undocumented twin.

But few have gone to the lengths of Barb Andersen, a lawyer from Chicago. She filed suit in New Mexico, long before Stuef’s identity was known, claiming the treasure was stolen from her by hacking her phone or computer or by physically stalking her.

To this day, Andersen claims the treasure was hidden in New Mexico and has filed for an injunction barring the Fenn estate from dispersing the treasure.

“It appears that [Stuef is] just another fake. You know, part of the comedy of the end,” she said in a Wednesday interview.

“If they’re planning on doing something fun, like a movie or book, they shouldn’t. They’re upsetting the people. They’re getting angry at this delay,” she said, adding, “If it was found in Wyoming, why was I jerked around for two years to search this area?”

Andersen has been searching in New Mexico since 2018 and says she was in contact with Fenn. She said he hinted she was on the right track in clues left in his scrapbooks and online messages. Andersen also claims there are mistakes in Fenn’s book and that when the case comes to trial, searchers will be very surprised.

She said the lawsuit would have been unnecessary if Fenn or the family would have pulled her in for a private conversation and “finally admit that I have the right spot and that you’re just pranking everybody else.”

Although Fenn said in July that the treasure was found in Wyoming, Andersen insists the statement isn’t verifiable, despite it being consistent with the venue and style of other public statements Fenn made.

“He didn’t say it in a verified fashion. He’s been purposely avoiding putting into verified fashion. And so I’m questioning if this is a stall, I’ve questioned their attorneys,” she said, adding, “I can’t get a straight answer out of them.”

“I do not care to spend my time disputing anyone’s convictions about where the treasure was. Everyone is entitled to their opinion in the United States of America,” he said. “But when they sue me, they cross a line.”

Shiloh Forrest Old, Fenn’s grandson, released a statement last week in which he described Andersen as “someone who is abusing the court system on frivolous grounds for the apparent purpose of self-aggrandizement and greed.”

Old added that, “We congratulate Jack [Stuef] on finding and retrieving the treasure chest, and we hope that this confirmation will help to dispel the conjecture, conspiratorial nonsense, and refusals to accept the truth.”

Brian Erskine of Arizona asserts in a different suit that Fenn’s poem and clues led to a site in Colorado and he asserts it was his solution to the riddle that led Fenn to call off the “crackpot jackpot.” He’s attached long, convoluted explanations of his solve to his filings as “visual evidence of performance by location” and has sought $3 million from Fenn’s estate, citing one possible estimate of the box’s value.

The idea that the treasure was found by someone in Wyoming, Erskine recently wrote, is a “lame, failed dodge, against genuine solution.”