The rate at which grizzly bears have been “lethally removed” by wildlife managers in the Greater Yellowstone Ecosystem has dropped significantly this year. 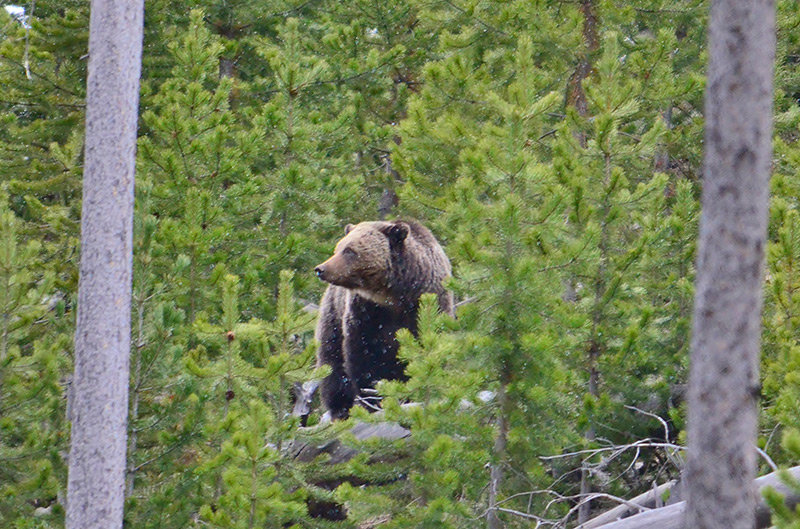 A grizzly bear is pictured in Yellowstone in this file photo.
Photo courtesy Frank van Manen/USGS
Posted Thursday, August 15, 2019 8:20 am
By Mark Davis

The rate at which grizzly bears have been “lethally removed” by wildlife managers in the Greater Yellowstone Ecosystem has dropped significantly this year.

Through mid-August, nine grizzlies have been euthanized in Wyoming in 2019, data from the U.S. Geological Survey says. At the same point last year, 17 grizzlies had been removed in conflict management actions. The Wyoming Game and Fish Department, under the direction of the U.S. Fish and Wildlife Service, removed a record 32 grizzly bears from the ecosystem in 2018.

Three grizzlies have also perished this year in automobile collisions, two of them in Montana.

There are about three months left before bears return to dens, said Sara DiRienzo, public outreach specialist for the Game and Fish.

“We consider the end of the bear year December,” DiRienzo said.

Hunters, who hit the fields as early as today (Thursday), are more at risk to be involved in encounters because they move quietly, try to mask their scent, sit downwind, use game calls and handle harvested game in grizzly habitat, DiRienzo said.

While hunters are in the field, bears will be out looking for as many potential food sources as possible before hibernation.

“We recommend people carry bear spray or some type of defense,” DiRienzo said. “We want people to protect themselves with something they feel comfortable carrying.”

Two men in the Jackson area were attacked by grizzly bears as they field dressed an elk last year, resulting in the mauling death of Wyoming hunting guide Mark Uptain and injuring a Florida client.

Fish and Wildlife reinstated regulatory protections under the Endangered Species Act for grizzlies in the Greater Yellowstone Ecosystem on July 31. While the move was met with disapproval from Wyoming officials, it was necessary to comply with an order from a federal judge in Montana, who reinstated protections for the species in September 2018.

Because the court vacated Fish and Wildlife’s entire 2017 delisting rule, all grizzly bears in the lower 48 states are again listed as threatened.