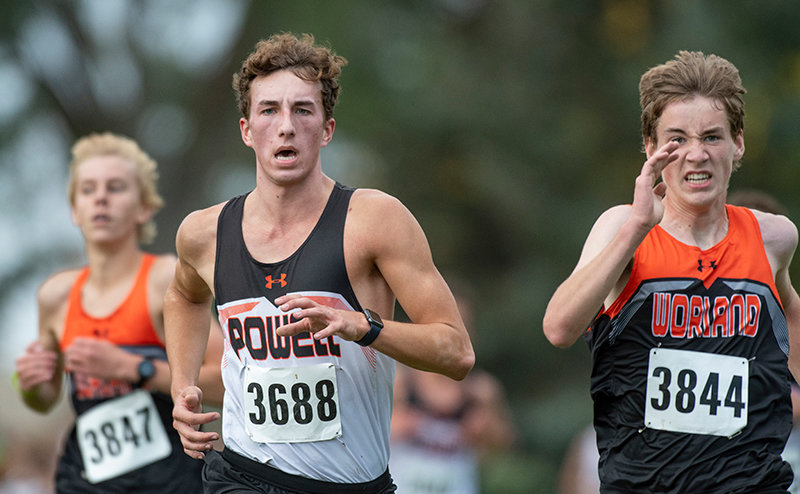 Ben Whitlock competes during the Panther invite on Oct. 8. Whitlock ran a personal record of 18:35 at the Class 3A West Conference meet in Riverton on Friday.
Tribune photo by Mark Davis 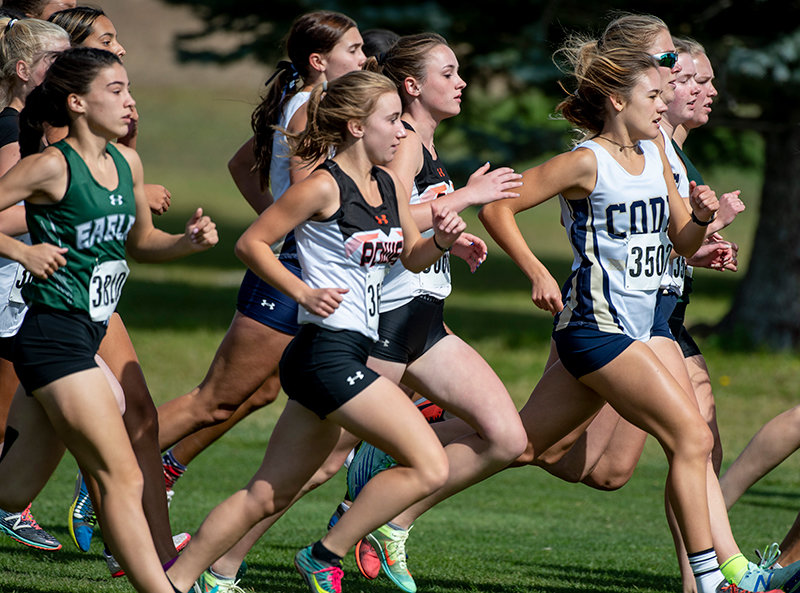 Kabrie Cannon and Kinley Cooley bust out the gates at the start of the Powell invite on Oct. 8. Cannon and Cooley were again the Panthers’ top runners at last weekend’s conference meet, finishing 11th and 13th overall.
Tribune photo by Mark Davis
Previous Next
Posted Tuesday, October 19, 2021 8:05 am
By Seth Romsa

“After starting last week by practicing in a blizzard and having the conference meet postponed to Friday, we ended up having a beautiful day in Riverton complete with a dry course,” Powell High School head coach Ashley Hildebrand said.

The PHS girls finished in fifth place as a team while the boys took sixth.

Daniel Merritt again led the way on the boys’ side. He placed seventh overall with a time of 17:06, earning him all-conference honors and finishing just two seconds off his personal record (PR).

Next across the line for the Panthers was Riley Schiller, who finished in 18:23 to place 25th while tying his PR.

“His time of 18:35 is almost two minutes faster than his time from the Riverton meet last year,” Hildebrand said of Whitlock. “His hard work has really paid off.”

Another Panther who has continued to drop his time through hard work was Breckin Streeter who was the fourth runner across the line in 38th place with a time of 18:59.

Rounding out the top five scorers for the Panthers was Liam Tayler with a mark of 19:58 in 44th place. Kyle North was just behind him once again in 45th with a time of 19:59.

The final runner for the varsity boys was Colton Decker, who finished with a time of 20:17, placing in 47th.

“Colton is a senior who has run cross country all through middle school and high school and I want to highlight his work ethic and character,” Hildebrand said. “He always works hard in practice with no complaints and his times have really come down this season.”

Kabrie Cannon again led the way for the Panthers. She just missed out on all-conference honors, placing 11th overall with a season-best time of 20:49.

“She looked really strong throughout the entire race and it was really nice for her to get under 21 minutes again,” Hildebrand said.

Kinley Cooley continued her recovery from illness, placing 13th with a time of 21:15. She’ll look to finish her freshman campaign strong at the state meet this weekend.

Brynn Hillman came in third for the Panthers, placing 19th overall in 21:42, breaking her personal record by 10 seconds. Jordan Black followed Hillman with a time of 21:48, coming in 21st.

“Jordan and Brynn have both been running consistently in the 21s since our meet in Worland which has helped our team standings quite a bit,” Hildebrand said.

Salem Brown was the fifth runner across the line for the Panthers finishing in a time of 23:47 in 41st place.

During the final junior varsity race of the season, Justin Hobbs came across the line in 19th with a time of 20:07.

The Panthers are set to head down to Ethete to compete at Saturday’s state championships at Wyoming Indian High School.

For those wishing to attend, there is a mask mandate in place on the Wind River Reservation for everyone in attendance, regardless of whether people are inside or outside.

Athletes are able to remove their mask when they are racing.

There will be a charge for children and adults who are wishing to attend.

The Panthers are looking to improve their times as the season wraps up, and grow from their showing at conference.