Wrapped inside a huge public lands bill that’s currently sitting on President Donald Trump’s desk is a permanent reauthorization of the popular Land and Water Conservation Fund Act. And … 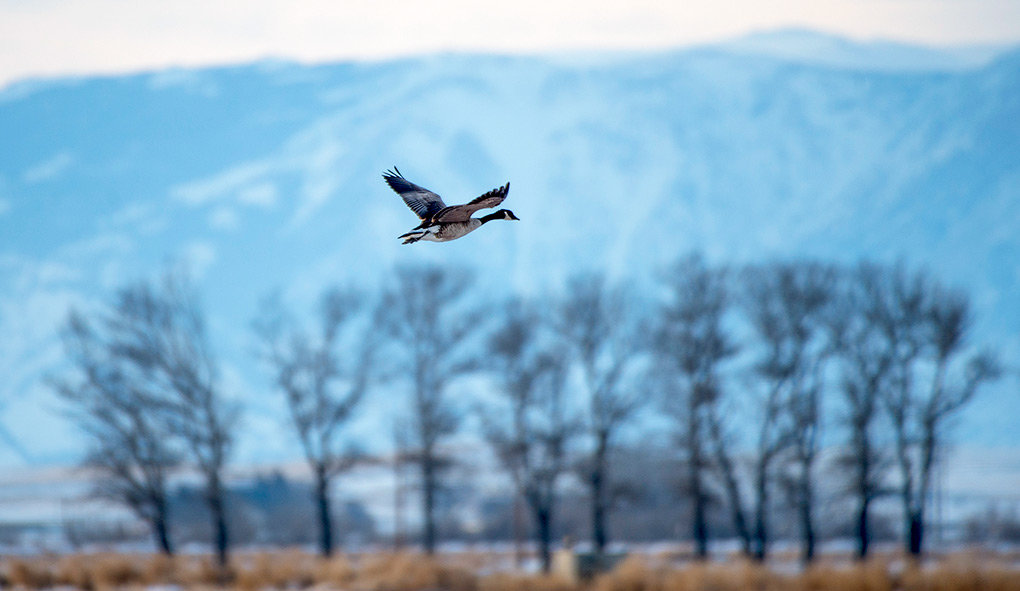 Canada geese migrate through the Big Horn Basin, finding refuge on some of the thousands of Bureau of Land Management and National Forest Service land in Park County. While a massive Public Lands bill awaits the president’s signature, changes to the Land and Water Conservation Fund — which is attached to the bill — might mean future outdoor projects in and around Powell can find grant money.
Tribune photo by Mark Davis
Posted Thursday, March 7, 2019 8:10 am
By Mark Davis

Wrapped inside a huge public lands bill that’s currently sitting on President Donald Trump’s desk is a permanent reauthorization of the popular Land and Water Conservation Fund Act. And there may be something in there for local Wyoming municipalities as well.

The fund, known as the LWCF, collects up to $900 million annually from offshore drilling taxes and distributes grants to state and federal entities to buy land and pay for outdoor projects and improvements. Many conservation organizations made a serious effort to push the legislation, which passed both the House and Senate with high bipartisan support. The Theodore Roosevelt Conservation Partnership, Trout Unlimited, Ducks Unlimited, the National Wild Turkey Federation and Backcountry Hunters and Anglers are just a few. The Wyoming Wildlife Federation was one of the local groups backing the fund for permanent reauthorization.

“This package is an historic piece of legislation that will provide funding to valued public resources across the country and here in Wyoming. We think it’s a huge step in the right direction and we hope to see a fully funded LWCF as a next step,” said Dwayne Meadows, executive director of the group.

Lobbying efforts were effective. In the Senate, both Wyoming senators supported the bill, sending the legislation to the House. With unusual bipartisan support, the bill designates more than 1.3 million acres of new wilderness, creates four national monuments, protects thousands of acres of land from future mining development, will upgrade firefighting technology — including the use of GPS and drones — while permanently reauthorizing the LWCF.

Sen. Mike Enzi had reservations about permanently reauthorizing the bill, but voted in favor due to mandates that no less than 40 percent of revenues be dedicated to LWCF’s state-side program. Currently, the LWCF has no requirements for state funding or access projects.

The bill included language that Sen. Enzi had been pushing, that would allow bows and archery equipment to be transported lawfully through national parks.

“If you travel with a bow to go hunting, you should not have to worry that taking a shortcut through a national park could find you in legal jeopardy,” Enzi said.

The state-side spending mandate was a big selling point for Sen. John Barrasso. “Guaranteeing that at least 40 percent will go to states ensures that LWCF will have positive impacts in local communities,” said Laura Mengelkamp, deputy communications director for Barrasso.

The bill also included Barrasso’s Open Book on Equal Access to Justice Act provisions, which would bring transparency to the use of taxpayer dollars by setting up a database to make public costs of losing lawsuits brought against the government. For example, when conservation groups sued the federal government and eventually convinced judges to overturn the delisting of grizzly bears, lawyers for the groups can seek compensation from the government for time spent on the suit. The database would those costs more readily accessible to the public.

The bill passed the Senate on 92-8 vote. Two weeks later, U.S. Rep. Liz Cheney, R-Wyo., voted against the House bill. She was in the minority, as the legislation passed on a margin of 363-62.

Cheney said she wants to put a stop to the increase of federal land acquisitions.

“Although the LWCF does some important work, today over half of the funds in the program are used to expand the size of the federal estate,” she said. “The Natural Resources Management Act will open the door for the federal government to acquire more of our lands when we should be reducing, not increasing, federal land holdings.”

Requiring 40 percent of the LWCF money to be spent state-side is not enough, “nor is it what Congress intended when the LWCF was first enacted,” said Maddy Weast, Cheney’s press secretary.

Trump is expected to sign the legislation soon in light of the bipartisan support.

One question that wasn’t resolved in the bill is how much of the $900 million Congress will appropriate each year. The bill doesn’t mandate full funding and the LWCF has only received the full amount allowed twice since the act was initiated in 1965.

Congress usually raids the fund, often siphoning off more than half to be used for issues like military spending. Tax revenue not included in appropriations goes into the general fund for use for other priorities. Currently there is more than $20 billion in the LWCF reserves.

“One of our most critical challenges will be ensuring that important programs have the resources to provide necessary assistance while remaining financially solvent,” Enzi said. “The current federal budget outlook requires some tough choices to get us back on track financially. When it comes to the public lands bill, the Congressional Budget Office issued an estimate that the bill would decrease spending over the next 10 years.”

Over the last 55 years, the City of Powell has received more than $688,000 from the LWCF, although much of that came early in the fund’s history. Almost $90 million has gone to helping national parks in the state.

Powell City Administrator Zane Logan has never been part of applying for LWCF funds, but is hopeful.

“It is always good to see a federal program allocate funds for state projects, especially during tight financial times,” he said.

Editor's note: This version corrects an editing error to reflect that Rep. Liz Cheney voted against the bill and did not vote for it.