At a Tuesday event in Cody, Wyoming Gov. Mark Gordon and Bureau of Land Management Deputy Director of Policy and Programs William Perry Pendley both called the overpopulation of wild horses harmful … 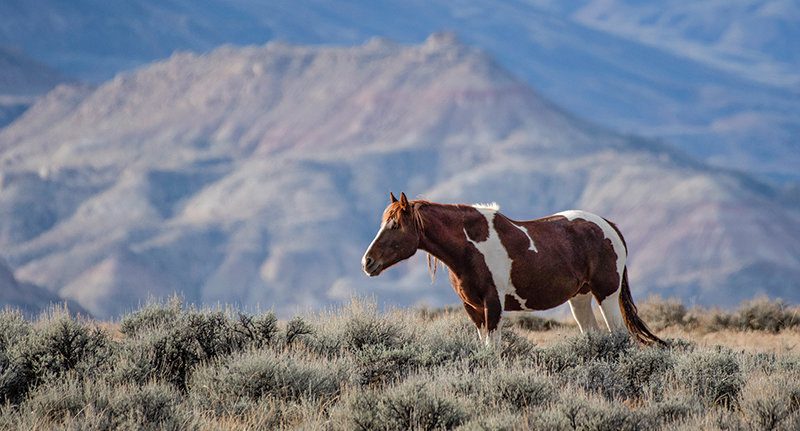 A wild horse browses in the hills of the McCullough Peaks near Cody. A three day convention seeking to open the conversation about the overpopulation of wild horses through the west met last week at the Buffalo Bill Center of the West.
Tribune photo by Mark Davis
Posted Thursday, October 15, 2020 8:15 am
By Mark Davis

At a Tuesday event in Cody, Wyoming Gov. Mark Gordon and Bureau of Land Management Deputy Director of Policy and Programs William Perry Pendley both called the overpopulation of wild horses harmful to ecosystems and wildlife — including to some endangered species in western states.

“The current situation is ecologically unsustainable, and not only threatens our continued existence of the wild horse, but wildlife and multiple use of our public lands and similar watersheds as well,” Gordon said in a pre-recorded video shown at the Free Roaming Equids and Ecosystem Sustainability Network (FREES) conference.

The event is a three-day meeting attempting to find common ground among stakeholders to achieve the goal of “healthy herds on healthy rangelands.” Both Pendley and Gordon pointed to problems from a wild horse population they say is much too large for the carrying capacity of western ecosystems.

“Wild horse populations on federal lands have long exceeded appropriate management objectives,” Gordon said. “The state of Wyoming has long fought to ameliorate the range-wide health risks posed by our increasingly high wild horse populations. I believe we can get to a point where we can stabilize it. But to do so, our strategy should commit to the appropriate balance of multiple uses, including forage for livestock, habitat for wildlife, all the while sustaining healthy wild horse herds and ranges.”

There are approximately 90,000 wild horses on public lands in the West, as well as tens of thousands of wild horses in temporary holding facilities in the U.S., costing the federal government more than $55 million annually. The issue is important to Pendley, who has led the BLM since July of 2019. He placed the blame on Congress and past administrations.

“I don’t think Congress was paying attention. Sorry to put it on them,” he said. “But they wrote the laws.”

Pendley told the crowd at the Buffalo Bill Center of the West he’d rather use the millions spent on wild horses fighting wildfires.

After taking on the acting director role at the BLM, Pendley said he was upset by the reports he received on the species.

“Frankly, I was shocked,” he said. “And I’ll tell you the part that shocked me the most was I got to the section where it said some of our lands are so degraded, that they will never recover. And that blew me away.”

Wyoming has the second highest populations of wild horses in the U.S. However, Pendley differentiated between herds in the southern part of the state and the well-cared for herds in the McCullough Peaks and in the Pryor Mountains Wild Horse Range.

“The wild horses in this area, which is a gateway to Yellowstone, are really an international attraction that people around the world can say, ‘Hey, I think I’ll go to Yellowstone but I’ll spend an extra day in Cody so I can go see the wild horses,’” he said.

The conference in Cody followed the 2019 summit held in Reno, Nevada, where delegates from more than 90 different organizations convened.

“Our purpose is to develop stakeholder-based comprehensive communication strategies and processes to manage free-roaming equids in concert with other public lands multiple-use objectives to achieve western rangeland ecosystem sustainability,” the organization said in an online release.

On Tuesday, the Cloud Foundation, a national organization dedicated to protecting America’s wild horses and burros on public lands, said the conference had declined to take an “unbiased, holistic, and scientific approach to address rangeland health and wild horse population management.”

The foundation said the Cody conference would push for the removal of wild horses and burros in order to accommodate commercial livestock grazing.

“It’s sad to see this conference push fake news that wild horses and burros must be rounded up while allowing more livestock to continue to graze in the same areas,” said Ginger Kathrens, executive director for the foundation. “Private, commercial livestock must be the first species to be removed in these Congressionally-designated Wild Horse and Burro Herd Areas.”

The foundation claimed livestock grazing impacts would not be considered at the conference and instead seeks to blame wild horses and burros for “all rangeland damage and calls for sterilization that would destroy natural wild behaviors.”

“These natural behaviors are the only difference between wild horses and their domestic cousins,” the group said.