Douglas and Anna Kawano of Powell were getting some things from their storage unit at BK Storage around 6 p.m. when they heard a faint mewing sound. They followed the noise and finally located the kittens inside what Anna Kawano described as a … 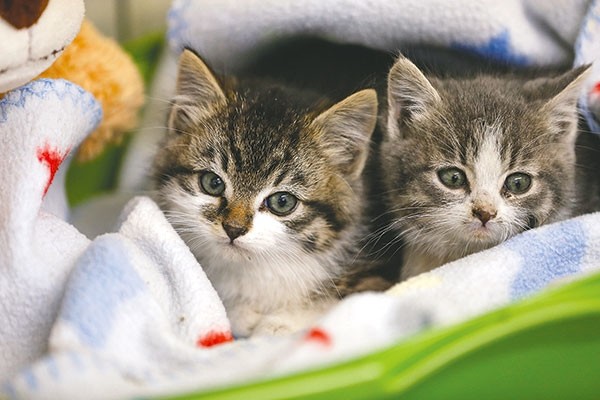 Two kittens — found and saved by Douglas and Anna Kawano on Sunday — are now at the City of Powell/Moyer Animal Shelter. The kittens were abandoned by their mother in an underground cement hole. The shelter now has nine kittens and 20 adult cats, all in need of good homes.
Tribune photo by Ilene Olson
Posted Thursday, November 30, 2017 3:42 pm
By Ilene Olson

The fate of two kittens would have been drastically different if a local couple hadn’t heard them mewing from their hiding place Sunday evening.

Douglas and Anna Kawano of Powell were getting some things from their storage unit at BK Storage around 6 p.m. when they heard a faint mewing sound. They followed the noise and finally located the kittens inside what Anna Kawano described as a cement block buried in the ground.

They called to Elfriede Milburn, who was volunteering at the City of Powell/Moyer Animal Shelter, just across a drainage ditch from BK Storage.

Milburn came to look the situation over. She saw that the kittens were in a hole 4.5 feet deep and 6 feet long, and decided it would be easier to get to them with a ladder.

Crossing the ditch seemed to be the fastest way to get a ladder from the shelter. Milburn let herself down into the ditch, but when she attempted to climb back out of it, the dirt on the bank broke loose.

That scenario repeated itself as she walked farther north along the ditch. It was dark, and she was without a flashlight. Each time she attempted to climb out or grab hold of weeds on the bank to pull herself out, the ground gave way. For a while, she feared she would suffer a fate similar to that of the kittens.

“I couldn’t believe how many times I slid off and went back” into the ditch, she said. “I thought, ‘I hope somebody knows I’m down here.’”

Finally, she found a place where she could climb out.

Meanwhile, Douglas Kawano had jumped into the cement-lined hole to save the kittens. When Milburn returned, he had pulled three of them out and put them in a cage from the shelter; a fourth kitten had died in the hole.

“One of the babies was in good shape; two of them were almost gone,” she said.

Milburn was successful in getting two of the kittens to eat; the third didn’t want to open its mouth.

“They were cold, so I stuck them between blankets and put them in my bed under an electric blanket. They just warmed up nicely,” she said, adding that on Monday morning, “they were all looking at me.”

Milburn took them over to the shelter later that morning, and the healthier two ate some cat food with milk in it. But the third kitten still was struggling, so she took it to Powell Veterinary Services.

“The third kitten didn’t make it,” she said Wednesday. “We took it to Lyle [Bischoff], and he gave it some fluids, but it didn’t make it.”

Milburn praised the Kawanos for caring about the kittens enough to go to their rescue.

“I was really taken by that,” she said.

“We were just happy that we were able to rescue the kittens. It made our night,” Anna Kawano said.

Milburn said Douglas had to move a heavy cement strip, 3 feet wide and 6 feet long, to get to the kittens. “He moved it with some big iron thing,” she said, adding that on Monday morning, “we covered it up so no other cat can get down there.”

Milburn said she is sure the kittens were born in the hole and had never been out. The mother must have jumped out, “but there’s no way she could get the kittens out,” she said.

A trap was set out in hopes of catching the mother. If she is caught, she’ll be spayed to prevent future unwanted litters of kittens, Milburn said.

Milburn said she’s thrilled with how well the two healthier kittens were doing.

But, she noted, the addition of two more kittens brings the total number of kittens at the shelter up to nine — and that’s not counting the 20 adult cats currently residing at the shelter.

She hopes that people who are looking for a kitten or a cat will consider adopting one from the shelter.