Like a huge puzzle, young scientists at the University of Wyoming are attempting to piece together how a mammoth died outside of Cody centuries ago. They’re recording as much information as … 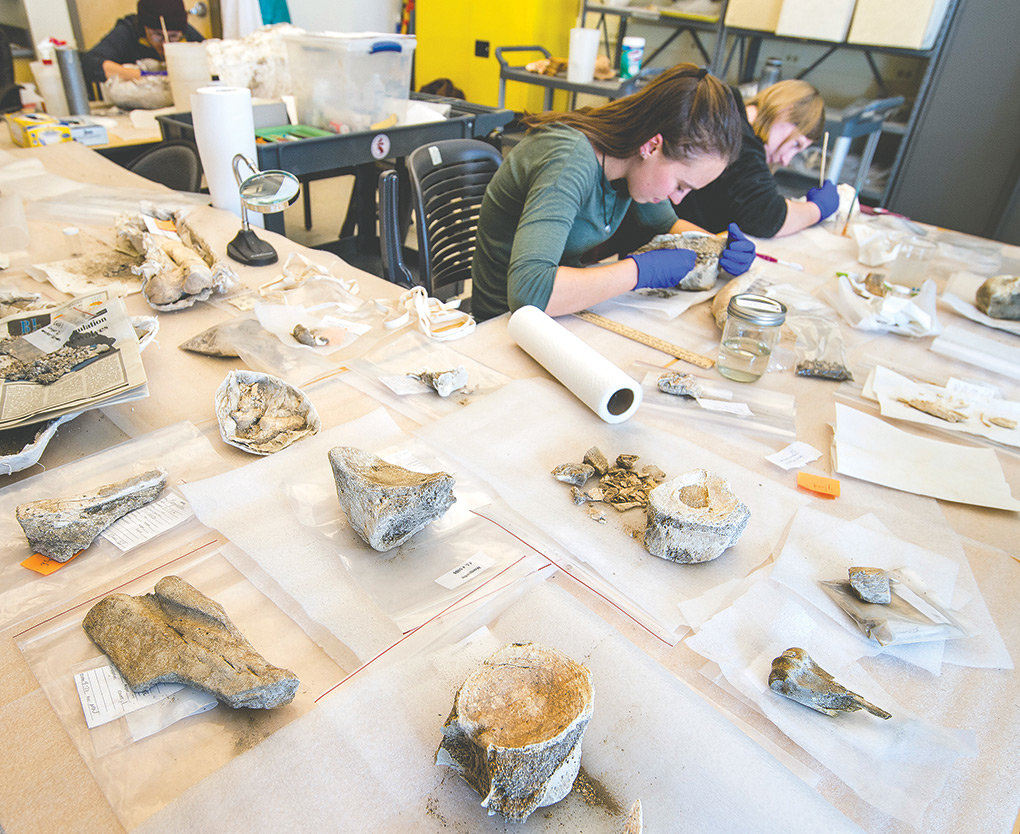 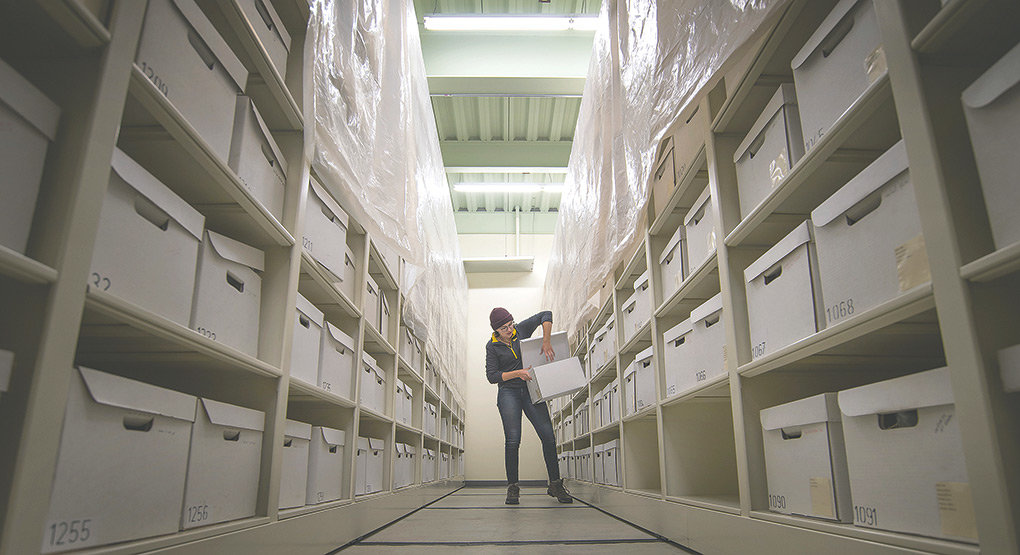 Molly Herron, a University of Wyoming graduate student and part-time processor in the anthropology departments archive, looks through a file in one of dozens of rows of artifacts stored in the department. There are approximately 4.5 million artifacts in the school’s ‘South Forty’ storage center in the basement of the school.
Tribune photo by Mark Davis 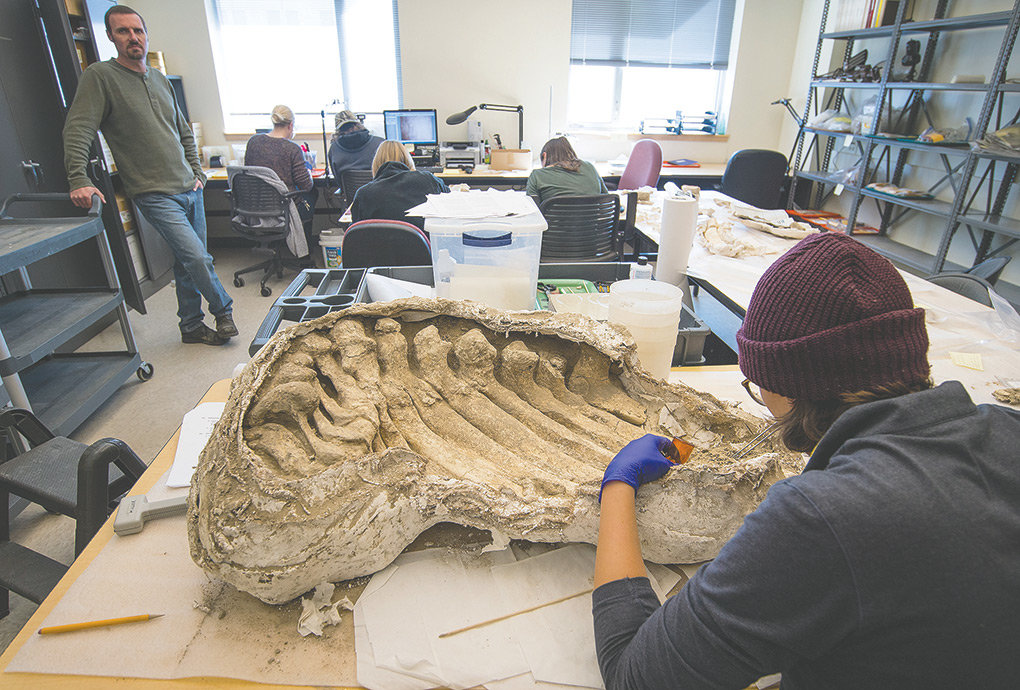 Molly Herron, a University of Wyoming graduate student, works on the ribs and vertebral column of a Columbian mammoth found near Cody last spring. Herron and four other students were selected for a faunal processing class to work with the remains from the discovery.
Tribune photo by Mark Davis 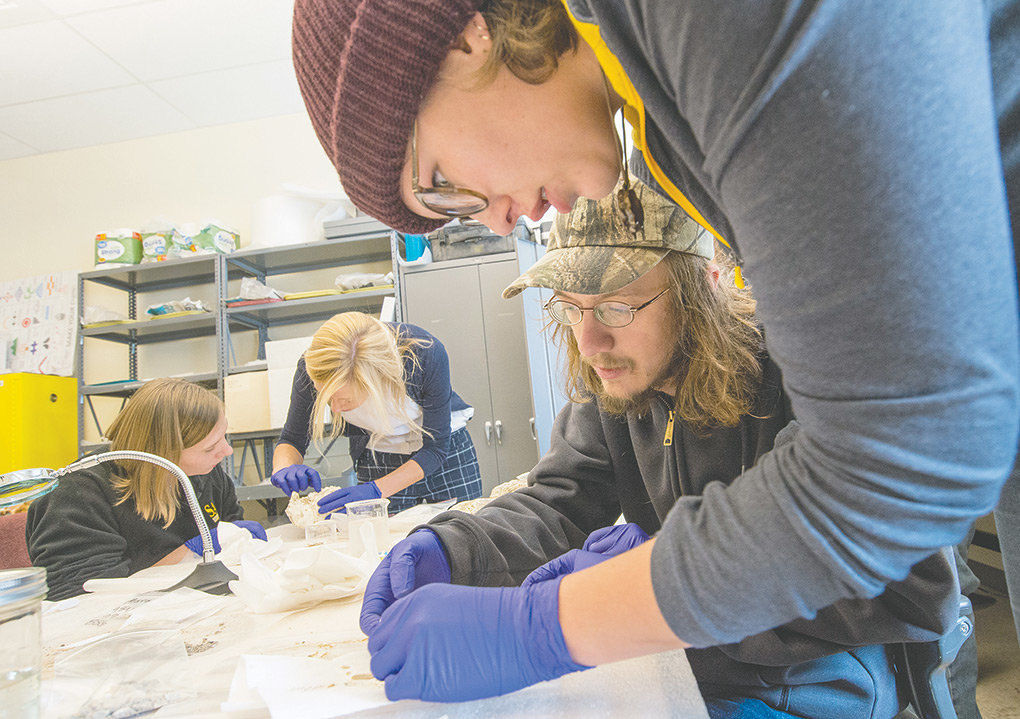 Archaeology graduate students Molly Herron and Ryan Bush process tiny fragments of a mammoth found west of Cody while Ashley Harris and Marieka Arksey, collections manager for the university archaeological repository, work on remains in the background during a special class to process the discovery.
Tribune photo by Mark Davis
Previous Next
Posted Tuesday, November 6, 2018 8:10 am
By Mark Davis

Like a huge puzzle, young scientists at the University of Wyoming are attempting to piece together how a mammoth died outside of Cody centuries ago. They’re recording as much information as they can about the animal’s life in Park County — and hoping the bones are evidence of a Pleistocene-man barbecue.

There are only 16 sites in North America where archaeologists have found early man took down a mammoth for sustenance. Finding one in Cody with proof of human intervention would be the fourth such site in the Cowboy State. Even if the discovery doesn’t turn up cultural evidence, the educational opportunity is great, said Greg Pierce, Wyoming state archaeologist.

The mammoth’s remains — discovered at the Buffalo Bill Reservoir last spring — have been moved to new digs at UW’s anthropology department.

Spread out on tables and shelves and in boxes and bags stored on sturdy metal shelving, artifacts salvaged from the site discovered in the shallows of the reservoir await cleaning, identification and research for signs of human intervention in the Columbian mammoth’s fate.

Five graduate students studying the remnants have a huge task in front of them. Artifacts — ranging from a large chunk of vertebral column to pieces the size of a grain of sand — number in the thousands. Six prehistoric species are currently represented in the bones recovered, including a Pleistocene-era camel, horse, bison, a type of early deer, pronghorn and the mammoth positively identified from the site. Other species could still pop up before the team is finished.

“If you look just by species, you could have a million years or more in range that some of these species were running around out there,” Pierce said. “Right now, there’s nothing here to say this was a cultural assemblage. It’s not unusual to find these species together.”

But for five archaeology students, this tedious, slow-moving work is a dream job.

“That’s what we live for,” said Morgan Robins, a graduate student from Lander.

A special type of class

Robins and Ryan Bush, of Wheatland, came early for an extra day of work in the lab last month. They spent hours cleaning and consolidating packages of materials collected from the bed of the Buffalo Bill Reservoir.

Casts and glues were used to stabilize fragile pieces for transport to Laramie, but now the adhesives and attached debris must be removed and the pieces identified and studied for evidence.

“One of my favorite parts of the job is taking all the little clues, putting them all together so when you write the report you can say something significant — something that matters and is helpful,” said Robins.

The students in the faunal processing class work under the guidance of Pierce, assistant state archaeologist Marcia Peterson and Marieka Arksey, collections manager for the university archaeological repository. While attendance in the class results in graduate credit for independent study, most would volunteer to do the work. Learning archival techniques and having their hands on a mammoth — the iconic species of the Ice Age — is an important experience in their young careers.

“It’s more of a special problems type of class. It won’t be offered every semester — it’s not the type you’ll find in a class brochure,” he said.

The students are some of the top students in the program, Pierce said. About 100 students are currently studying in the department.

Many of the students graduating from the university’s program will work in the compliance archaeology industry. It’s work mandated by state and federal laws prior to development of roads or construction projects. They can also find employment with federal agencies, like the Bureau of Land Management or the National Forest Service. The median salary for archaeologists working in Wyoming is $59,350, according to the Bureau of Labor Statistics. Accelerated degrees, often a doctorate, can push salaries into six digits.

“One of the myths that people seem to think is there aren’t any jobs out there,”  Pierce said. “There are quite a few — so long as you’re willing to travel.”

The mammoth mission gives clues to the life of an archaeologist: After Pierce was contacted by the Bureau of Reclamation to lead the salvage effort, he and his team packed and hit the road to Cody. All the while, they were coordinating between state and federal agencies as well as contacting a short list of professional volunteers. After arriving at the reservoir, the team worked 12-14 hours a day in Wyoming weather — under a hot sun for two days and then in rain and blowing snow for two more. The team removed a cast of the largest piece of remains as the rain and snow rolled in.

Pierce tent-camped at the site until the weather turned.

“It was blowing so hard I slept in my truck for a couple days,” he said.

By the time the team heads back to the lab to uncover the secrets of summer excavations, they’re ready for a little time indoors — especially sleeping in their own beds and having a shower available. Most of the work is done in the lab.

“About 95 percent of the work is analysis, 5 percent is digging,” said Arksey, the collections manager.

From art to bones

The university anthropology department is in a newer building on the Cowboy campus. The labs and classrooms are well lit, but every inch is covered in projects and supplies. As artifacts are processed and studied, they are moved to storage.

More than 4.5 million artifacts are stored in basement vaults, called “the South Forty storage.” Protected by climate control for humidity and temperature and under lock, artifacts run from microscopic to large slabs of rock and bone. Some are surprising: A whale rib found near Medicine Bow from a time much of the state was under water; giant slabs of rock with prehistoric art; a mammoth tusk; and human remains — all brought to the museum for protection from erosion and vandals.

The vaults also contain exactly what you expect to find in a Wyoming repository: Native American and historical site artifacts and tons of paperwork. While most of what is stored in the South Forty has little value, to scientists it is priceless. A September fire at National Museum in Rio de Janeiro, Brazil — where 200 years of anthropological and geological research was lost — rippled across the profession.

“It keeps me up at night,” said Molly Herron, a grad student in the class. “I’ve worked in curation and feel for the researchers who lost their entire collections.”

Pierce points to the fire as evidence of the importance of digitization. In many cases, once the artifacts have been studied, reports written and photographs taken, they’re sent back to agencies and private landowners or moved to exhibits and used as educational pieces.

As Bush put it, “We don’t dig dinosaurs.”

There is some overlap between the two fields, but it’s relatively small. Archaeology studies people and culture. For the most part, their studies are based in the past 14,000 years, though the profession goes back approximately 2.5 million years. Paleontology, meanwhile, studies time back to 4.5 billion years ago.

The UW students would love to find definitive evidence of a human connection to the mammoth remains found west of Cody, but as of yet, there is none. Should they find cultural evidence, scientists could be returning to the site for several years. Without it, the artifacts will be moved to the paleontology department and “we probably won’t be back,” Pierce said.

The archaeology department is holding an open house for the public in Laramie today (Tuesday). For more information, visit www.facebook.com/OfficeoftheWyomingStateArchaeologist or http://wyoarchaeo.state.wy.us.