Between the COVID-19 pandemic and rising costs, local residents — and the nonprofit organizations who work to help them — have faced some tough times over the past couple of years. But …

Volunteers stand by after helping unload a massive load of food from a Latter-day Saints Charities truck on the morning of Nov. 30. The commodities delivered to American Legion Hughes-Pittinger Post 26 will be distributed on Saturday to anyone in need for as long as the supplies last.
Courtesy photo 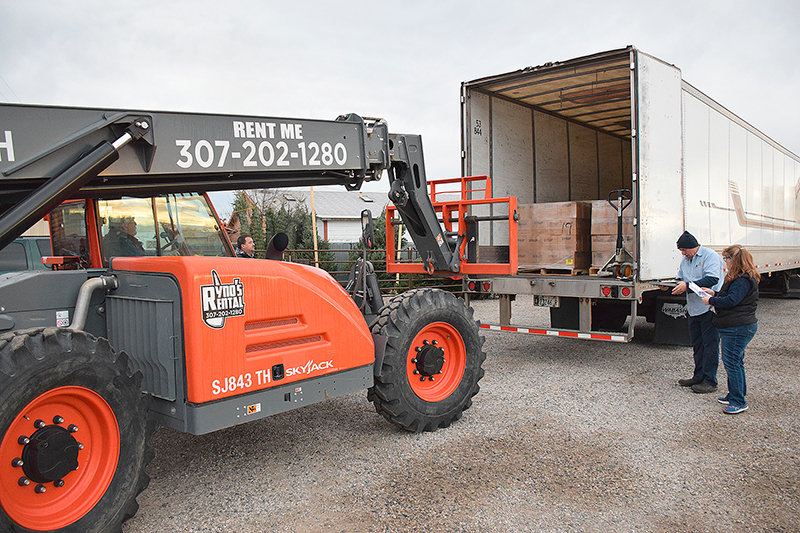 It took some heavy equipment to offload the massive amount of goods that were delivered to Powell last week by Latter-day Saints Charities. The food and other household items are being distributed to community members in need and to several nonprofit organizations. A second load of dairy products and meat is set to arrive in Cody today (Tuesday).
Tribune photo by Toby Bonner 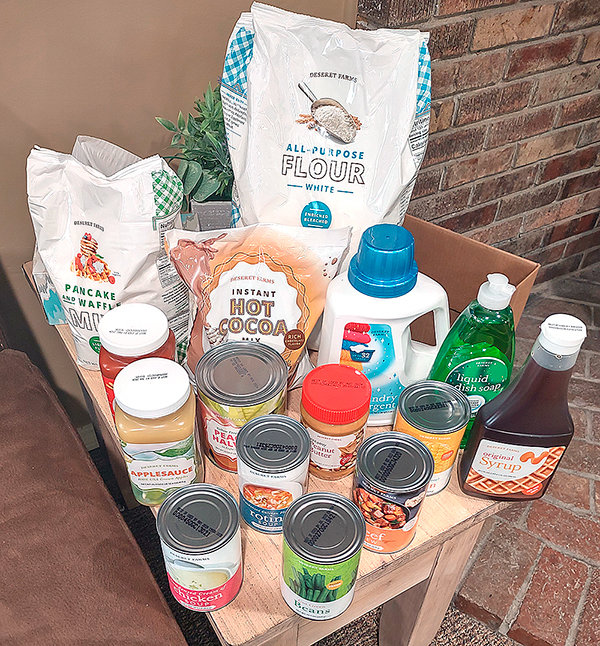 The Deseret Farms goods delivered last week were produced by the Church of Jesus Christ of Latter-day Saints.
Courtesy photo
Previous Next
Posted Tuesday, December 7, 2021 8:20 am
By CJ Baker

Between the COVID-19 pandemic and rising costs, local residents — and the nonprofit organizations who work to help them — have faced some tough times over the past couple of years. But some relief arrived in Powell last week in the form of a semi-truck laden with 48,000 pounds of flour, applesauce, rotini, corn, beans, rice, pancake mix, peanut butter, spaghetti sauce, pears, peaches, beef stew, syrup, hot chocolate and even dish soap.

On the morning of Nov. 30, a couple dozen volunteers worked quickly to unload 48 pallets of commodities — bound for distribution to community members in need, for the Powell and Lovell senior centers, for Powell Valley Loaves and Fishes and for Crisis Intervention Services. Another 48,000 pounds of meat and dairy products are set to arrive in Cody today (Tuesday) to provide more help.

It was enough of a boost that Powell Valley Loaves and Fishes had to find an additional spot to store the new goods.

“This was an extraordinary amount,” said an appreciative Jim Wysocki, who serves with the organization.

Deirdre Cozzens, a member of the LDS church and a coordinator of volunteer efforts in the area, got the ball rolling by reaching out to the charity about the possibility of assistance.

When she got in touch with the LDS Charities to ask about some help, they said, “absolutely,” Cozzens recalled.

The food came from the Bishops’ Central Storehouse in Salt Lake City, with most of the items produced directly by the church. For instance, Cozzens said the dairy products and canned goods were processed in Salt Lake, the wheat used for the pasta was grown on a church-owned farm in northern Montana and the peanuts came from church property in Houston; the soap was made in Magna, Utah.

The aid was contingent on Cozzens finding other organizations to partner with the distribution of the items, “to make sure that the goodness is spread,” she said.

It culminated with the team of volunteers from multiple organizations gathering at American Legion Hughes-Pittinger Post 26 last week to offload and sort out the goods.

The bulk of the pallets were immediately stored at the post, as those items — along with some of the dairy and meat products due this week — will be distributed to community members in need from 11 a.m. to 1 p.m. Saturday.

“We’re hoping that people that don’t need it won’t take advantage of it, but it’s open to everybody,” said Patty Paulsen of the American Legion Auxiliary, who’s helping coordinate the distribution. Unlike the monthly commodity distributions, there are no income guidelines for receiving the assistance on Saturday.

“It’s open to everybody in need,” Paulsen said.

The Legion itself has been in need of extra assistance in recent times, she said, as the Food Bank of Wyoming has had fewer commodities to offer.

“There’s been months that we’ve had to shut down early because we ran out of food to give out,” Paulsen said.

The more than 16 pallets of items from LDS Charities, however, will offer a big boost. Not only is it in addition to the regular commodity distribution — which will still take place on Dec. 18 — “this is like 10 times more than what we would get [normally],” Paulsen said.

And they’re just one of the organizations benefiting from the shipment. For instance, the pallets delivered to the Powell Senior Citizens Center are also arriving at a good time, as the nonprofit has been facing a tight budget and rising costs. Director Linda Dalton said the center’s supplier recently warned to expect food prices to increase 10-15% in the coming six months.

Supplies have also shrunk, Dalton said, apparently because of a tight labor market. For instance, rice has been hard to order, but it was included in the recent shipment from LDS Charities.

The center has itself struggled to fill a few open positions, all while the number of seniors using the facility and requesting home-delivered meals has continued to rise by leaps and bounds; Dalton said she’s fortunate to have a great crew that’s willing to step up wherever needed.

It will take some time to work the various commodities into the senior center’s menus, but over the long run, “it’s going to save us thousands of dollars just in the vegetables and the fruit and the different items that we’re getting,” Dalton said, adding, “the items will be used, and we appreciate it so much.”

Cozzens, too, was appreciative of the many organizations that partnered with the LDS church on the relief effort — and more people are set to assist and benefit from today’s distribution in Cody.

“It’s pretty amazing,” she said following the Powell event. “It was so many good people, so many people that care about other people and it just spreads and it’s just a beautiful thing.”