Trapping regulations could soon be changing in Wyoming as a newly organized Game and Fish Department committee explores making recommendations for approval by commissioners. 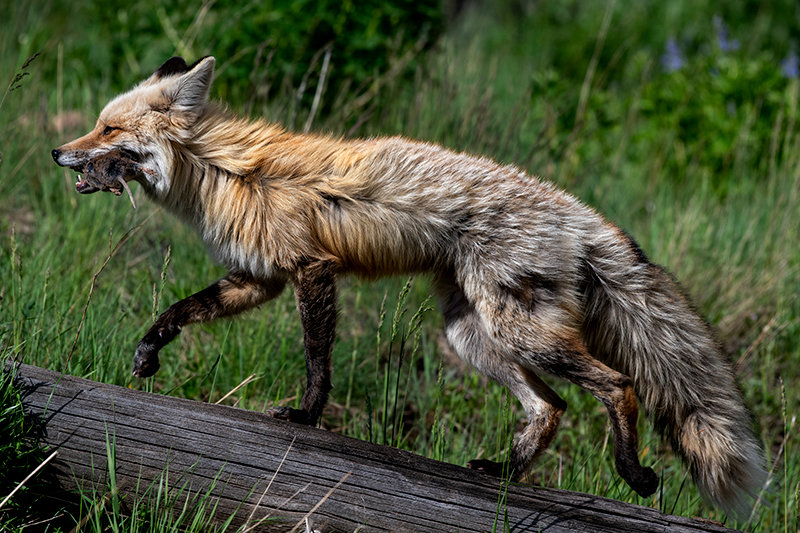 A red fox captures a rodent while foraging for a meal near the Northeast Gate of Yellowstone National Park. Foxes are considered predatory animals in Wyoming and, along with coyotes, jackrabbits, porcupine, raccoon, skunk and stray cats, can be harvested without a license in the state.
Tribune photo by Mark Davis
Posted Thursday, August 27, 2020 8:15 am
By Mark Davis

Trapping regulations could soon be changing in Wyoming as a newly organized Game and Fish Department committee explores making recommendations for approval by commissioners.

The Trapping Committee was formed to look into possible changes after two groups concerned about safety issues presented petitions to the Wyoming Game and Fish Commission earlier this year.

Commissioners in April denied a petition by WY TRAP FREE-mont County and supported by Wyoming Untrapped to develop trap-free zones in the state. But in July the commission charged the department with studying the issue and recommending possible fast-tracked changes. If changes are made, it will be done outside of the normal regulation rotation of once every three years, due in 2022.

To engage stakeholders, the department, in partnership with the University of Wyoming Extension Office, is holding a set of five public meetings focused on regulations. The final two meetings will be available virtually.

The first meeting will be held in Rock Springs on Tuesday, Sept. 1, followed by Jackson on Sept. 2, Sheridan on Sept. 3, Laramie on Sept. 9 and Lander on the 10th. Those wishing to be included in the final two meetings online must pre-register.

While regulations are on the schedule to be reviewed every three years, they have been opened more frequently in the past, said Jason Hunter, Lander Regional Wildlife Supervisor. The commission has management authority over furbearers and trapping or harvests of furbearers. But it has “very limited authority over methods of take for predatory animals,” he said.

Trapping by the numbers

Sales of furbearer harvest licenses have more than doubled in the past two decades, with 1,097 licenses sold in 2001 and 2,498 in 2019. But the number of licenses sold doesn’t accurately show how many people are trapping in the state because both residents and nonresidents can trap for predatory animals without a license. Reporting of harvested predators is not required.

Regulations have been changed several times in the past 20 years, including a 2001 requirement to check traps within 72 hours (excluding snares and quick-kill body traps); a 2004 regulation making it illegal to tamper with legal traps or to remove furbearers caught in traps; a 2009 regulation requiring trappers to check snares and quick-kill body traps once a week (the check period could be as long as 13 days if a snare or quick-kill body-grip trap was set or checked on a Monday of one week and rechecked the Sunday of the next week); a 2006-2008 decision to close certain areas to the taking of furbearers; a 2016 regulation making it legal to release a pet or livestock from a trap.

Colorado, Idaho, Montana and Nebraska all have regulations identifying how far traps must be set back from trails, roads, recreation areas, campgrounds, feedlots and dwellings.

About 400 citations have been issued in the past 15 years for trapping violations with another 340 warnings. The most common offenses were failing to check traps within 72 hours and to properly tag traps and snares; those two offenses made up about half of all warnings and citations issued. About 15% of all warnings and citations issued resulted in no action being taken because “we could not identify the subjects because the traps were untagged,” Hunter said.

“There are several cases that involve multiple citations and warnings issued to the same person. And going through all these cases, it’s pretty evident that we have less than 20 individuals that comprise a lot of these multiple violations,” he said.

In one case, 42 violations were issued to the same scofflaw. Violations were trending down as of 2019, but Hunter said he believes that’s due to lower levels of law enforcement rather than fewer violations. Of the 837 violations committed (resulting in 390 citations) in the past 15 years, the Game and Fish collected almost $79,000 in fines, more than $2,500 in restitution and suspended licenses for a total of 85 years.

It wasn’t a case of illegal trapping practices that brought this case to the commission. Karen Zoller, of Pavillion, petitioned the state after her dog was caught and killed in a snare equipped with a dispatch spring. They had been out for a run on Bureau of Land Management property. The trauma of not being able to get her dog, Mac, out of the trap and having him die in her arms made Zoller want to share her story. She started WY TRAP FREE-mont County soon after the incident.

“I just wanted to share the story to let other people know to be safe because there are hidden traps everywhere,“ she said.

Zoller advocates for trap-free areas across the state, a ban on spring-loaded snares designed to quickly kill predators, trapping area signage, set-backs from public trails, a 24-hour trap check rule and rules requiring the reporting of all animals caught — both target and non-target species. She would also like to see trapper education, similar to regulations recently passed in Idaho that require trappers to take a class prior to purchasing a license.

“Wyoming is lagging behind our neighboring states on trap reform that would make our public lands safer,” Zoller said.

Lisa Robertson, co-founder of Wyoming Untrapped told the commission in July that “trapping issues are growing more contentious every day. We urge you to please act to mitigate the situation.”

Robertson urged the commission to consider that the number of the people using public land is increasing and that regulations should reflect the change in use of public land. She asked them to consider a mandatory requirement for trapping education to help stem “an alarming number of unintended trapping incidents” including wildlife and pets.

The Game and Fish doesn’t keep data on pets being caught in traps, but Robertson said more than 70 incidents of dogs caught in traps were reported to her group.

“The loss of domestic animals and wildlife has enraged our constituents,” she said. “Whether or not this agency values their opinions, their concern, their anger and their action is increasing.”

Robertson hopes the department will see her organization as a partner in future regulation changes. “While our agencies may seem like strange bedfellows, we urge you to work with us.”

The group plans to push for making trapper education mandatory, implement setback and signage regulations, require all trappers to buy conservation stamps and to create trap-free areas and stringent regulations for the types of traps allowed.

The Wyoming Constitution guarantees the opportunity for citizens to fish, hunt and trap.