While standing on a ladder, using one of her three chainsaws, Christy Muecke had a lot of thoughts running through her head.

The Powell resident, mother of three, teacher and artist had a lot of … 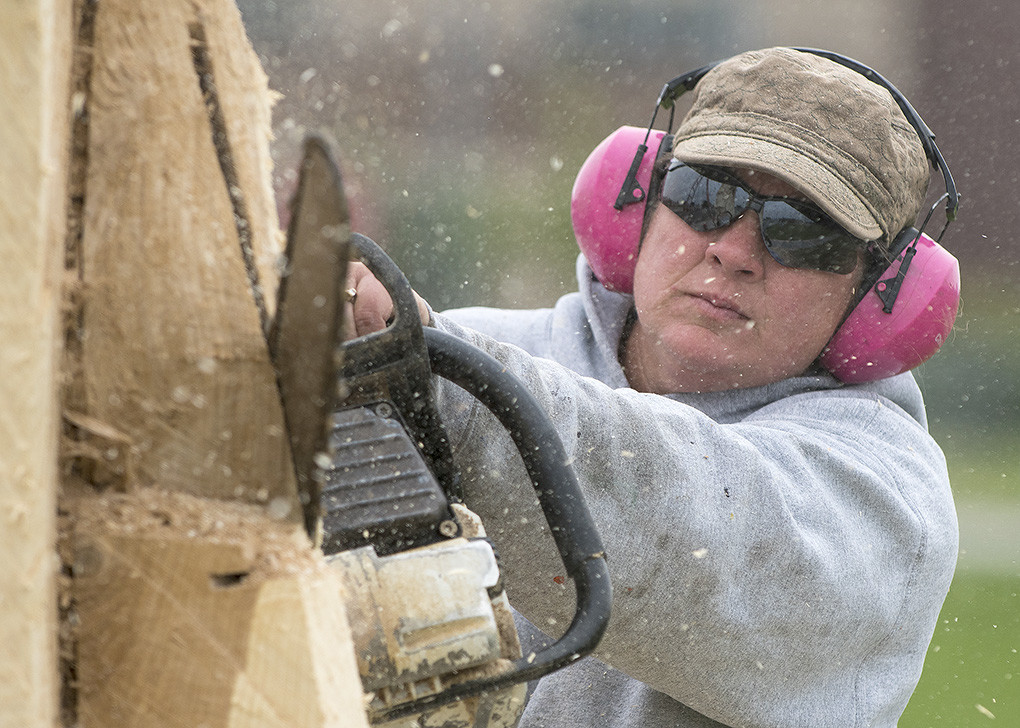 Wood chips fly as Christy Muecke (a.k.a. the ‘Chick with the Chainsaw’) works on a sculpture near the main entrance to the Park County School District No. 1 Support Services Building. The sculpture was made possible after several dying trees had to be removed in front of the building earlier this year.
Tribune photo by Mark Davis 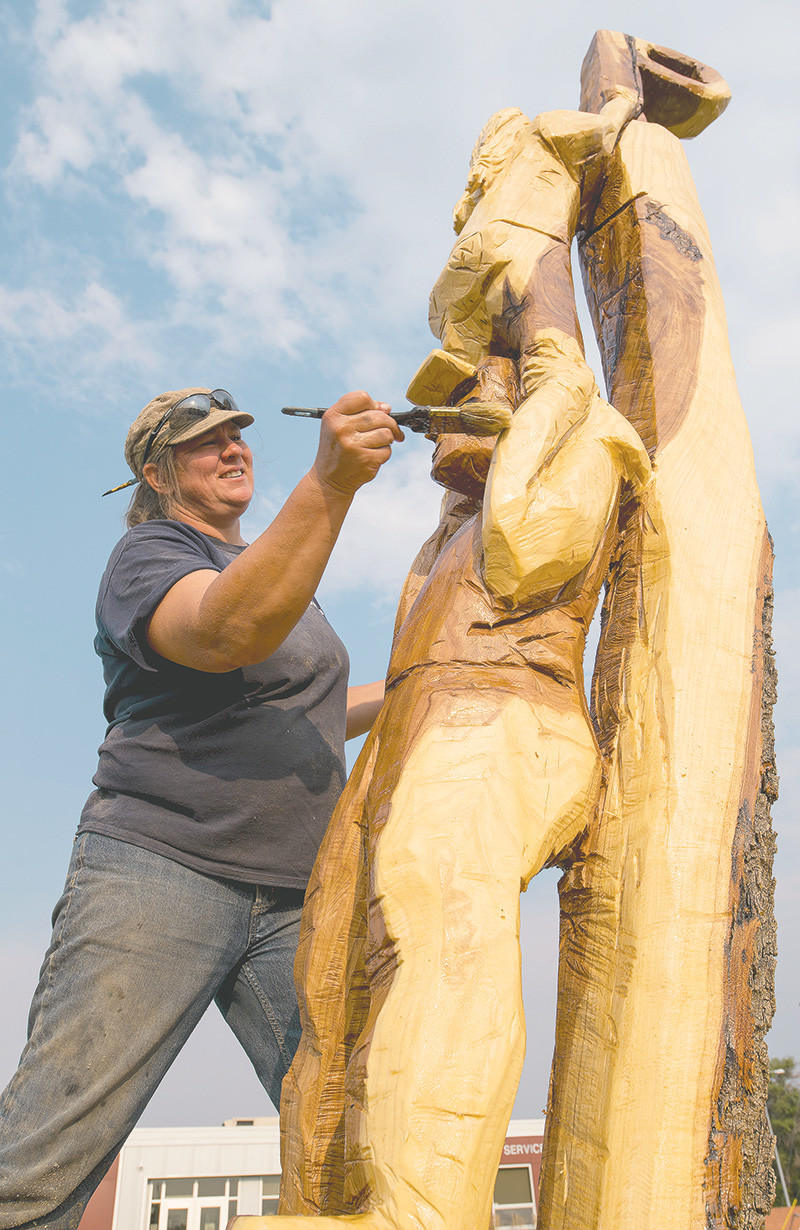 Christy Muecke applies a varnish to the north side of a sculpture, which depicts two students working together to install a Powell ‘P’ on a pole. The varnish will need to be applied at least once a year to keep sprinklers and the sun from harming the wood
Tribune photo by Mark Davis 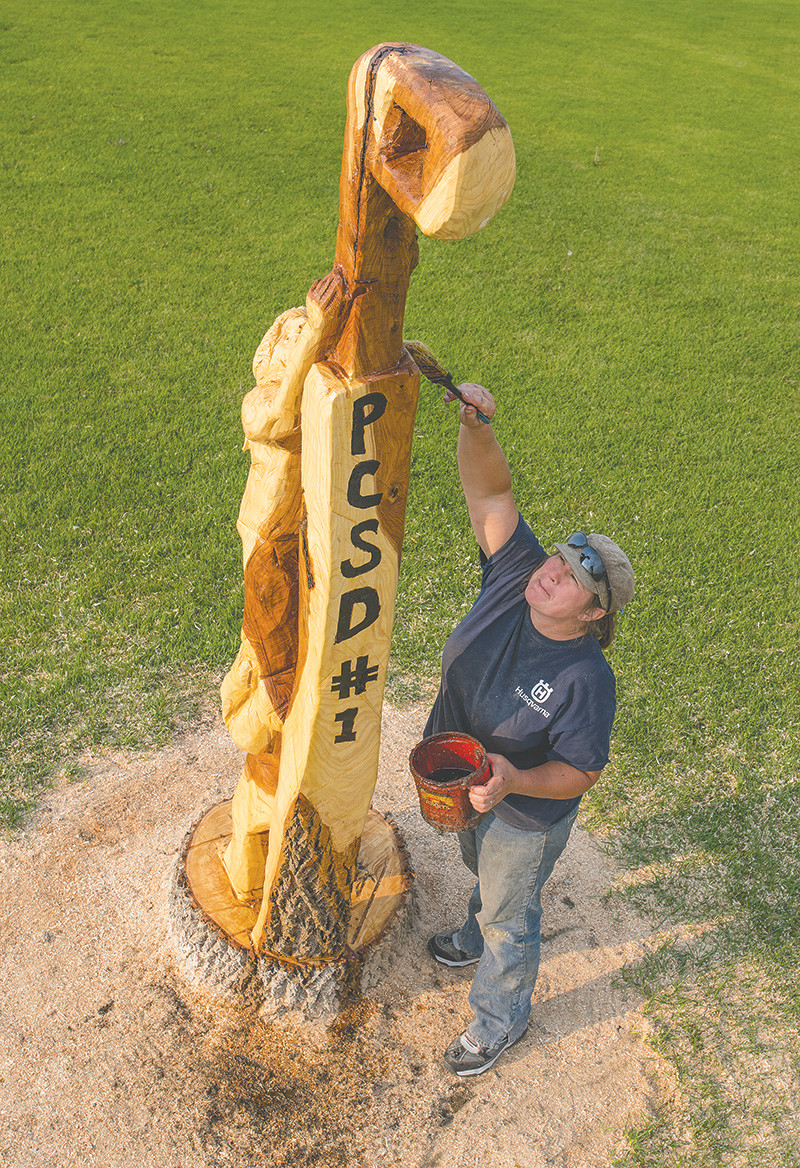 Christy Muecke applies a preservative to her finished sculpture of a boy and girl placing a Powell ‘P’ on a pole.
Tribune photo by Mark Davis
Previous Next
Posted Thursday, August 9, 2018 8:05 am
By Mark Davis

While standing on a ladder, using one of her three chainsaws, Christy Muecke had a lot of thoughts running through her head.

The Powell resident, mother of three, teacher and artist had a lot of time to think this past weekend while creating sculptures out of stumps in front of the Park County School District No. 1 Support Services Building. The long-standing ash trees were recently removed due to liability and cost concerns after becoming diseased.

When the trees’ removal became inevitable, Rob McCray, support services coordinator for the Powell district, started thinking about what to do with the stumps.

“We hated to cut down the trees,” he said. “So we wanted to dress the front up a little bit.”

Enter Muecke, the chick with a chainsaw. McCray remembers when Muecke would ride her big bull, named Bullraguard, through town for parades. (“He was my first claim to fame,” Muecke said.)

Her husband, Ryan, was an ag student of McCray’s when he was in school. And Christy was a substitute teacher for McCray early in her career. He had seen and enjoyed Christy’s sculptures, so it was natural he would think of Christy as he looked out his office window at the 8-foot stumps left from the tree removal project.

“She did a great job,” McCray said.

Muecke has been creating art with her chainsaws for almost 20 years. Her sculptures can be seen across the region where trees were felled or at local fairs and events. But on this day, she pondered a question that has occupied humans for millennia: Is it art?

“Honestly, I struggle with the title ‘artist,’” Muecke said.

For several days, Muecke worked to create two sculptures. The first was the numeral one (for district No. 1), inscribed with the text, “Empowering students to be lifelong learners.” The second was more difficult. It shows a girl crawling on a boy’s shoulders to put a Powell “P” on a post. Muecke was alone at the site all weekend, throwing wood chips and finding the figures in the wood grain.

Monday morning, she was back to work early at the support services building. But this time, it was for a meeting for her full-time job. Muecke is a special education teacher. She has previously worked in the Powell system, but moved to the Cody High School this year after earning her master’s degree in education.

Muecke has made a cottage industry out of her sculptures. Handy with a saw, she worked her way through her bachelor’s degree at Chadron State College, in Nebraska, working for a local tree trimming company.

“I worked around my class schedules and on weekends,” Muecke said. “I was able to carry myself through college on my gift of carving.”

She left her artistic touch across Nebraska’s panhandle, carving stumps in client’s yards.

Returning to Powell, Christy married Ryan and began teaching in the Powell system.

“Back then Ryan and I didn’t have much. It was paycheck to paycheck,” she said. “Thank goodness carving was able to provide a little extra for new tires on the truck, to pay the insurance bill or any other extra [expenses] that came up.”

It was a team effort. Ryan helped run the business and helped out as much as he could. They started a family. First came Curtis in 2007, then Tucker in 2009 and finally Charlee in 2011.

“People would shake their heads in disbelief when they saw me out carving with my big, pregnant belly,” she said.

An unexpected benefit of her chainsaw art: The kids can sleep through anything, Muecke said. The three often join her in the enterprise. Curtis has become quite the salesman, Tucker likes to use his muscles working behind the scenes with dad and Charlee has her mother’s eye for art; she often paints while her mother carves.

“I use my carving as a means to teach our kids that God gives us gifts. With those gifts we are always to give back to others,” Muecke said.

“It’s important to support others around you and Ryan and I make sure our kids are learning this lesson,” she said.

While the extra money has helped the growing family, Muecke loves working with chainsaws and wood, valuing the reaction to her work more than the payoff.

“I want to brighten someone’s day with my work, if only to give them a simple smile along the way,” she said, still refusing to call her work art. Muecke even uses the word “carving” rather than sculpture.

“She has a vision she works from and she’s very clever,” Kopriva said.

To Kopriva, there is no question Muecke is a serious artist.

“Its definitely art,” he said. “I think she’s really quite good.”