During a 10-day medical mission in rural Kenya over the summer, the 28-year-old Powell native made the best of whatever resources were available.

“I had the pharmacy set up in a family’s house one day, and by house, I mean the end portion of … 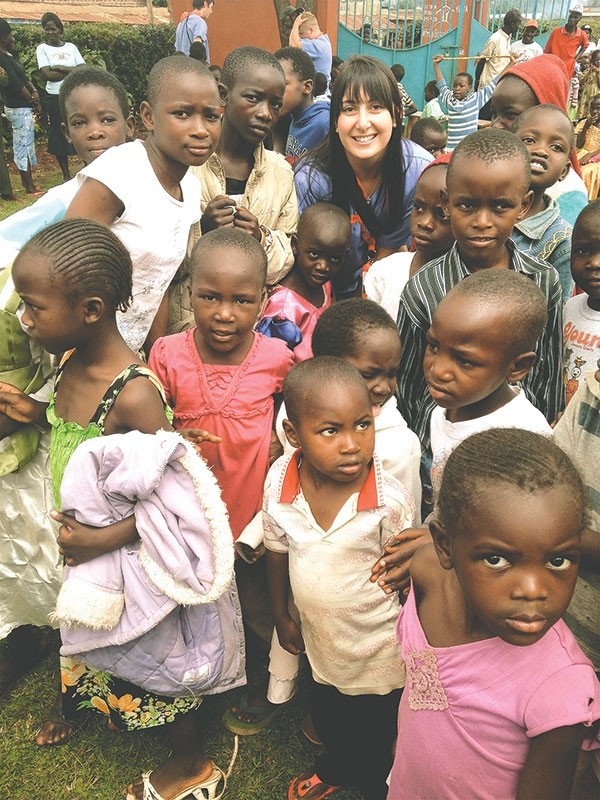 Kendra VanGrinsven is pictured with kids in Kenya. VanGrinsven is concerned about the number of children who don’t have shoes, so she and other volunteers are collecting shoes to send for Christmas (see details in the story below).
Courtesy photos
Posted Thursday, November 6, 2014 7:00 am
By Tessa Baker

In makeshift pharmacies with dirt floors and natural light coming from holes in rooftops, Kendra VanGrinsven found herself far removed from the tidy, organized settings she is used to as a pharmacist.

During a 10-day medical mission in rural Kenya over the summer, the 28-year-old Powell native made the best of whatever resources were available.

“I had the pharmacy set up in a family’s house one day, and by house, I mean the end portion of a roughly 10-foot by 20-foot clay hut,” said VanGrinsven. “I can’t say I had ever imagined practicing in that type of setting.”

VanGrinsven went on the trip through International Medical Relief, which provides medical care to underserved and vulnerable areas around the world.

“A huge component of the trip is also community education,” she said.

With a team of 57 volunteers from all over the United States, VanGrinsven participated in six clinics in six villages in an area northwest of Nairobi, Kenya.

“We saw 550 patients on our busiest day — that’s incredible! Our final tally was 2,250 patients.” she said. “The entire trip was 10 days, which meant we were on the move non-stop between long clinic days and preparation for the next trip and also relocation to our next stop.”

There is a large demand for health care and a shortage of doctors in Kenya, where 46 percent of the population lives in poverty, VanGrinsven said.

“We focused on providing care to the rural areas with the least amount of access to healthcare,” she said.

The settings for the clinics varied from churches to schools to family’s homes.

“The floors were dirt most days and our tables or ‘shelves’ were set up using school benches, the light was usually just from windows and the roofs had their share of holes in them,” she said. “We often times had cows and or pigs roaming around outside, which always made me laugh.”

The medical volunteers treated a variety of conditions and diseases. Some were common in the U.S.: hypertension, asthma, lice, ear infections, allergies, urinary tract infections and the common cold — “it was winter for them,” VanGrinsven said.

“We had a large group that served as dermatology and wound care, and they definitely had their work cut out for them.”

VanGrinsven’s team was more than 3,000 miles removed from the Ebola outbreak in West Africa, so Ebola was not a concern during the trip. She did get vaccinations for Yellow Fever, Hepatitis A and B and tetanus.

Another concern was terrorists.

In her pharmacy studies, VanGrinsven was interested in learning more about infectious diseases and saw the trip to Kenya as a way to help people in extreme need while also furthering her knowledge about diseases. She heard about the International Medical Relief (IMR) trip from a physician at St. John’s Medical Center in Jackson, where she works as a pharmacist.

“After learning about IMR and seeing the need for medical help in this particular region, it wasn’t something I could turn away from,” she said.

VanGrinsven said her experiences in Kenya showed her how much she enjoys health care and how rewarding the job can be. The trip’s leader had said if the team saved even just one life, then it would be worth it.

While the team treated hundreds of patients, VanGrinsven recalled one memorable incident involving a 1-month-old infant who was severely malnourished.

“Shorty after he came in, he stopped breathing,” she said. “Our pediatric provider did CPR on him all the way to the hospital and until the on-call doctor arrived.”

After VanGrinsven and the other volunteers returned home to the U.S., they learned the baby was discharged from the hospital and doing well.

“He made it because our team was there. Words can’t describe that feeling,” she said.

Another highlight for VanGrinsven was working with Kenyan health care workers.

VanGrinsven said the people she interacted with “were absolutely amazing.”

“They are such strong-willed and kind people,” she said. “Many of our translators stayed with us throughout the trip, and the love they have for their country and people will definitely stay with me.”

One challenge of the trip was traveling to the remote locations and keeping a fast-paced schedule throughout the 10 days.

“We worked under some really difficult conditions, and aside from the cold showers and lack of restrooms in some places, I would say the biggest challenge was just being exhausted,” she said.

However, helping people “more than made up for any exhaustion, because they were always so happy to see us.

“The less-than-ideal conditions were tolerable when you put everything into perspective,” VanGrinsven said. “I didn’t really care if I had a cold shower when I was covered in dirt, sweat and who knows what else.”

VanGrinsven hopes to go on another medical mission.

“... this will definitely not be my last,” she said. “One of the IMR alumni told me I would be addicted after one trip, and she was correct!”

Kendra VanGrinsven’s work in Kenya is not quite done yet.

She and other International Medical Relief volunteers are sending shoes over to a contact in Kenya who will distribute them appropriately.

“We hope to have them sent for Christmas this year,” VanGrinsven said. “It was extremely alarming to me to see the amount of small children without shoes, considering all of the illnesses that can be obtained from being barefoot.”

Aldrich’s Do it Best Center in Powell will serve as a drop-off site for those who are able to donate children’s shoes.

“Every little bit helps!” she said.