They’ll be asked to reconsider their decision soon, but commissioners last month rejected Philippe Lajaunie’s request to be exempted from the county’s zoning regulations so he can expand his existing water bottling operation in Clark. The … 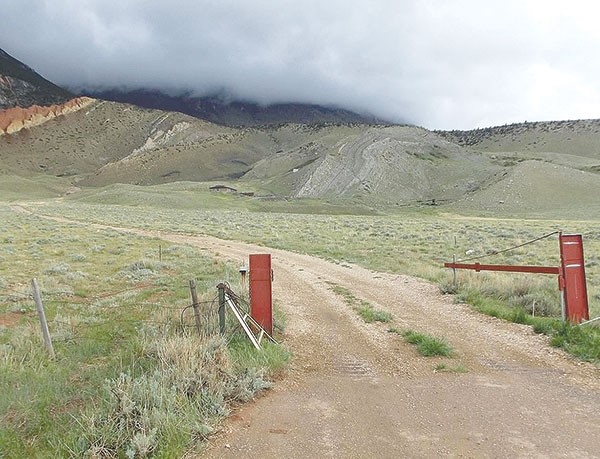 Philippe Lajaunie’s proposed plan to build a large water bottling factory would be just to the right of the existing bottling facility for American Summits, which is conducted from a ranch house near the Clarks Fork Canyon.
Photo courtesy Park County Planning and Zoning Department
Posted Tuesday, June 16, 2015 3:25 pm
By CJ Baker

A New York entrepreneur’s plan to build a large water bottling factory near the Clarks Fork Canyon has been at least temporarily halted by Park County commissioners.

They’ll be asked to reconsider their decision soon, but commissioners last month rejected Philippe Lajaunie’s request to be exempted from the county’s zoning regulations so he can expand his existing water bottling operation in Clark. The water is sold under the name American Summits.

Lajaunie’s property is located at the foot of the Beartooth Mountains, just outside the Shoshone National Forest.

“That’s probably one of the most pristine, scenic spots in Park County,” said Park County Commissioner Tim French during a May 19 hearing. “I just don’t think that’s the place for a big major industrial use. I just really don’t.”

The property lies within a county zoning district intended to promote “the retention of open space, agricultural land, wildlife habitat, riparian habitat and scenic areas.” Major industrial projects — like the proposed water bottling plant — are not allowed. That means Lajaunie needs a variance, or exception to the rules, to move forward with his plans.

His representatives in Cody — attorney Colin Simpson of Simpson, Kepler and Edwards and engineer Bret Reed of Engineering Associates — encouraged the commissioners to approve the variance and then scrutinize the details later, when specific site plans for the facility go through another county review.

Rough plans shown to the county called for a more than 45,000 square-foot facility with a 37-space parking lot just off Road 8VC.

“Mr. Lajaunie is really going to endeavor to build a facility that is in harmony with nature and with the site,” Reed said.

“He (Lajaunie) would like to be able to bring Wyoming’s water — and it has a very nice flavor — to that market,” Reed said.

A native of France, Lajaunie has already experienced significant success in the food and beverage industry, owning multiple restaurants and other business ventures; it was at his New York City restaurant, Les Halles, where celebrity chef Anthony Bourdain got his start.

Lajaunie’s involvement with bottling Clark water formally began in a 2007 partnership with brothers Daren and Steve Singer, whose family had owned the spring and ranch for decades. However, that joint enterprise ultimately fell apart and ended in foreclosure. Lajaunie then bought the property and bottling equipment from the bank under his company, Heart Views LLC, court and property records say.

American Summits currently bottles the water inside an expanded ranch house on the property and stores some water in Cody.

“It just doesn’t afford the size and capacity that is necessary to achieve the economy of scale to really compete in that (larger) market,” Reed said of the set-up.

To try getting a market foothold, American Summits has sponsored numerous high-profile events in locales ranging from Baltimore to L.A., from professional tennis tournaments to a recent TED conference focused on women.

Part of American Summits’ pitch is that the water is bottled in the United States — unlike Perrier (France), Fiji Water (Fiji) or San Pellegrino (Italy) — and is therefore more environmentally sustainable.

The company’s marketing also emphasizes its pure, untreated (and vegan-certified) water that’s bottled “at the source.”

“It will be a good thing and it can be done in an environmentally-sensitive, scenically-sensitive (way),” Simpson told the commissioners. He added, “I know what your doubts are, but it’s so difficult to allow that business to become what it is and what it’s been promoted to be for years and years without this variance.”

Commission Chairman Joe Tilden was on board with approving the variance and then coming up with restrictions when specific plans were later reviewed. Tilden said he has strong feelings about private property rights and noted the jobs and business the project could create.

“I think it can be done in a ... very environmentally safe way that will blend in with the environment and won’t affect wildlife,” he said.

French countered that he, too, believes in private property rights and “the individual purchased the property knowing exactly what the restrictions on it were.”

“I agree it might be good to have a business in there that supports the local economy, but I think there might be other options out there,” Livingston said.

He said he might have been more receptive if he’d been presented with a more detailed plan.

Tilden had intended to delay a decision until the full commission could consider the request, but the commission mistakenly closed its public hearing before that was suggested.

After the short-handed commission nixed the request for the variance, Tilden told Simpson to go resubmit the proposal so commissioners could discuss the project again.

“I would suggest you go ahead and reapply for a variance and I do apologize for my mistake,” Tilden said.

Simpson said Monday that Lajaunie does intend to reapply for a variance in the near future.

American Summits’ glass-bottled water is available in sparkling and natural varieties, with the company website listing the nearest retailer as being in Seattle.