Despite heavy opposition, a Wyoming Senate committee advanced a bill that would allow a Powell game bird farm to continue collecting wild greater sage grouse eggs and attempting to raise the … 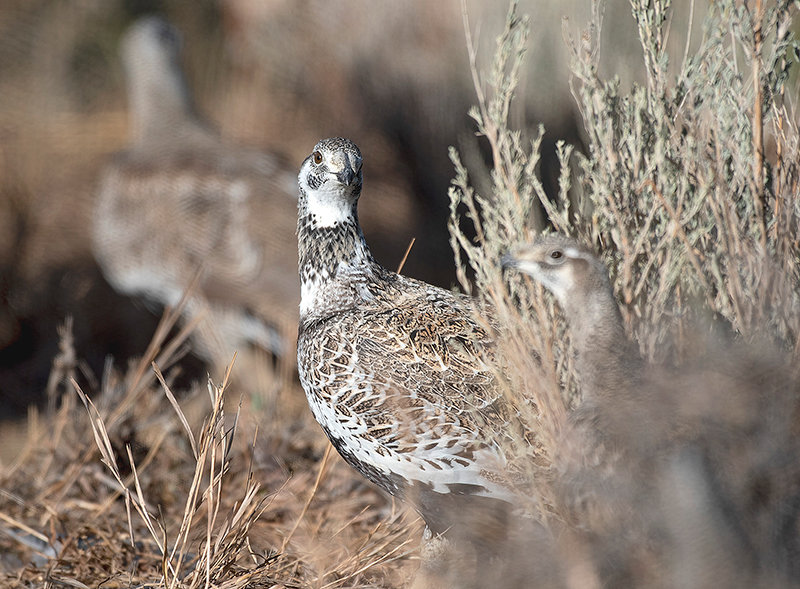 Greater sage grouse appear to be living in their natural habitat, but are actually in flight pens at Diamond Wings Upland Game Birds outside of Powell. The farm has 51 sage grouse and managers hope they will breed this spring. If they do, it will be the first time in U.S. history the species has been bred in captivity.
Tribune photo by Mark Davis 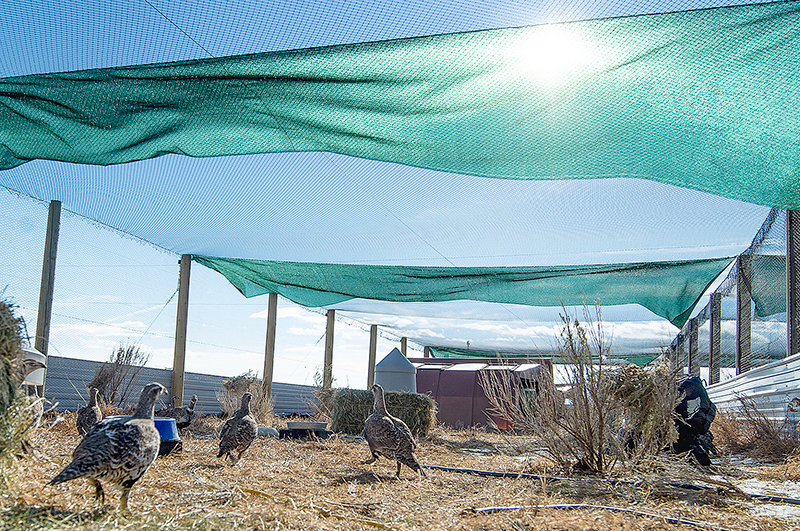 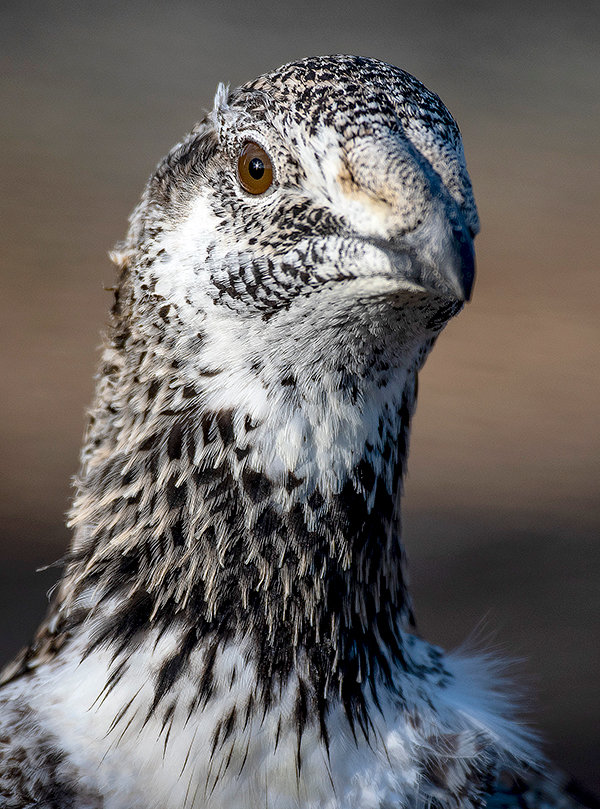 Despite heavy opposition, a Wyoming Senate committee advanced a bill that would allow a Powell game bird farm to continue collecting wild greater sage grouse eggs and attempting to raise the imperiled species in captivity.

State lawmakers enabled the experiment through a 2017 bill that became law without the signature of then-Gov. Matt Mead, who was not in favor of privatizing captive breeding attempts. However, the law included a five-year sunset clause that will terminate the experiment on Dec. 31 unless an extension is approved.

Diamond Wings Upland Game Birds, LLC, which operates a bird farm just west of Powell, has been the only company to seek to raise captive grouse. The company struggled with infrastructure and operational costs, technology and timing, but was finally able to gather 133 wild eggs last year. Farm manager Karl Bear was able to hatch all but 21 of the eggs, which generally didn’t appear to be viable.

Now, as just over 50 adult grouse live in flight pens west of Powell, the company is lobbying the Wyoming Legislature to allow them to “continue the research.”

“It took us the first four years to figure out how to get into the field, gather the eggs, find the eggs, gather them, transport them, incubate them, hatch them, and raise the bird. And as you’ve already heard, we have 51 birds, which will become the breeding stock for the bird farm,” Diemer True, former owner of the farm and current president of the Western States Sage Grouse Recovery Foundation, said Tuesday.

True and current farm owner Dennis Brabec told the Senate Travel, Recreation and Wildlife Committee of the need to continue the project. Brabec and True said they have no intention to release the grouse from their pens, but instead want to raise them for research, in case captive breeding is needed for attempts to save the species in the future.

“This is not a commercial endeavor,” True said. “This is a research project. And we would welcome the University [of Wyoming] or community colleges to come in and work with us side by side.”

True explained that this is a critical year for the project. Diamond Wings is hoping to see the broodstock breed, giving the farm eggs and eliminating the need to harvest more wild eggs. If they can realize its goal this spring, it will be the first time in U.S. history greater sage grouse were bred in captivity. The well-financed Calgary Zoo in Canada recently achieved the feat, though in its first attempt to release the birds into the wild, only two of 66 grouse survived.

“When we initiated the bill, I really felt that if we couldn’t figure it out in five years, I would tip a hat to those people who said you can’t do it and concede and walk away from it,” True said. “Well, it took us all this time to get to this point. And so we’re asking for permission to continue.”

Representatives from several heavy hitters in grouse conservation were on hand to voice their opposition, including Jess Johnson and Auna Kaufmann from the Wyoming Wildlife Federation, Yufna Soldier Wolf of the Wyoming Outdoor Council, and former Wyoming Game and Fish sage grouse program manager Tom Christiansen.

Christiansen is one of the top sage grouse authorities in the West, serving as the state’s top sage grouse scientist for 15 years before retiring in 2018. He said allowing a private bird farm to collect sage grouse eggs from the wild, hatch and raise the birds in captivity, and privatize their ownership was one of the most “distasteful issues I was drawn into during a 33-year-long career with the Wyoming Game and Fish Department.”

Since the farm has hatched and raised grouse to adults, Christiansen said there is no need to remove more eggs from the wild. He noted that Diamond Wings and the Calgary Zoo already have a broodstock and if the experiments continue, “they shouldn’t be at the cost to wild populations.”

“As this bill is debated in the coming days, I strongly recommend that the Legislature, at the very least, take this opportunity to end the practice of collecting sage-grouse eggs from the wild by deleting that subsection from the existing statute,” Christiansen said, adding that “game farming generally isn’t good for Wyoming or for our wildlife. Instead of doubling down on a problematic practice, it’s time to refocus on the conservation strategy that we know works: conserving intact, wild habitat for Wyoming’s wildlife, and particularly for our imperiled sage-grouse.”

Johnson, government affairs director for the Wyoming Wildlife Federation, said the nonprofit organization has long opposed wild game farms, going back to 1975 when they testified in support of a bill banning any new game farms for deer and elk.

“This was based on the premise that we felt that the privatization of a public resource for a profit went against everything that upholds what we thought were Wyoming hunting values,” Johnson said.

The private farm holds research and methods as proprietary information, she added. “This bill continues to allow that in perpetuity, while benefiting from the ability to collect a public resource of wild eggs.”

Johnson also warned that the risk of farm-borne disease spreading to wild populations is a major concern, calling Diamond Wings’ attempts “a higher risk to the wild population without much of the benefit.”

“We have learned really hard lessons from other states like Wisconsin and their chronic wasting disease spread that came from deer farms,” she said. “And here in Wyoming we learned a lesson just last year when a pheasant farm in Sheridan had a salmonella outbreak that killed 6,300 of their chicks.”

The Wyoming Outdoor Council weighed in on the issue prior to the hearing, saying in a press release that, “Wyoming people do not support privatizing our native wildlife for commercial gain, nor do we buy the line that this private company helps conserve our state’s wild sage-grouse. Farming sage grouse is not a Wyoming conservation solution.”

Soldier Wolf, Wind River organizer for the Council, pointed out a review of the experiment was supposed to be generated at the end of the five-year cycle, according to the 2017 law.

“My question is, has there been any generated data to support the continuation of this experiment?” she asked.

Elizabeth Aranow, a lobbyist for the Council, said the original 2017 law forbade the use of state money for the project, but Game and Fish has incurred more than $17,500 in expenses each year Diamond Wings has been certified — averaging more than 300 man-hours traveling to Powell and state-sanctioned collection sites for inspections and observations of egg collection.

Game and Fish Director Brian Nesvik said the farm has to go through recertification each year and is “carefully regulated.” But he also pointed out that as the current law reads, Diamond Wings or another certified applicant could sell sage grouse to be released for hunting if they so desired.

“The law certainly would allow that kind of a practice,” Nesvik said.

Prior to the vote, both Sen. Bill Landen, R-Casper, and Wendy Schuler, R-Evanston, fondly remembered times during haying season when sage grouse were plentiful. They both made statements in support of Diamond Wings’ efforts.

“We’re finally starting to show promise. It would be a shame to cut this experiment off right when we’ve got a chance to find out if it works,” Landen said, adding “Sometimes you have to do unnatural things to help our natural environment out.”

From here, the bill must pass through three readings and possible amendments on the Senate floor before being sent to the House to repeat the entire process.