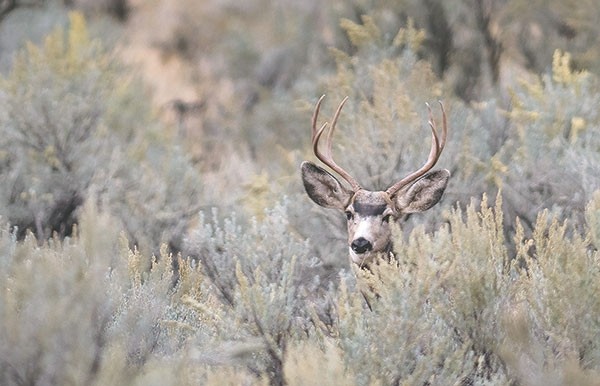 A mule deer buck hides in the sagebrush near Meeteetse during the 2017 deer season. The 2018 season will require bucks have a four-point antler point restriction in several hunt areas in this part of the state, in an attempt reverse the trend of falling buck ratios.
Tribune photo by Mark Davis
Posted Tuesday, March 27, 2018 2:25 pm
By Mark Davis

With mule deer buck ratios below objective in the upper Shoshone River herd unit (hunt areas 110-115), the Wyoming Game and Fish Department will hold hunters to a four-point antler point restriction. Doe harvests will also be reduced west of Powell this fall due to low populations.

Very difficult winter conditions during 2016-17 and poor fawn ratios for the past four years have resulted in herd units west of Powell being below objective, Mong said during the fall season-setting meeting at the Big Horn Federal Savings Bank’s community room Thursday. In popular Hunt areas 110 through 115, deer population estimates are below the objective of 9,600-14,400, with 8,600 animals now estimated in the herd.

Meanwhile, a new tag has area hunters chomping at the bit for a chance to harvest a bison on the North Fork of the Shoshone River. It will be the first time in recent history that bison tags have been offered on the North Fork, Mong said.

“If you draw that license, it will be amazing,” he said. “It’s to deal with damage and brucellosis management issues on the North Fork.”

But don’t get your hopes up — drawing the tag will be like winning the lottery. Three tags were offered, two resident and one nonresident. Hunters had to apply for the three tags by Feb. 28.

Mong also mentioned a possibility of offering a general tag for mountain goats in the future, thanks to new laws passed by the state Legislature. Additional chances to harvest a goat would be a response to overlap of the growing goat population and bighorn sheep in sections of Hunt Area 3 (the Sunlight/Crandall areas and the North Fork area north of U.S. Highway 14/16/20). The tags won’t be offered this year, but they will be considered as a “new tool in the toolbox” for future seasons, Mong said.

Hunt Area 3 has some tough hikes to reach goats, Mong said. The 2017 season was tough on hunters due to weather.

“We got dumped on and people couldn’t get to goats deep in the country,” Mong said.

The harsh weather led to a higher than usual nanny harvest, he said; hunters were forced to take goats closer to access points.

Mong added that there will be some expanded elk opportunities in the area due to damage on private land.