The Porkchop Geyser in Yellowstone National Park’s Norris Geyser Basin was once a small hot spring, a blue pool that occasionally erupted.

But in 1985 the geyser changed: The Porkchop began … 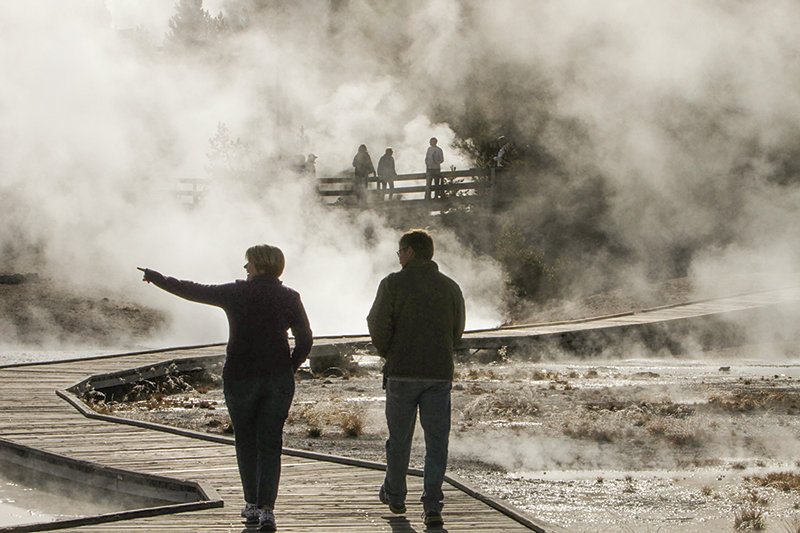 The Porkchop Geyser in Yellowstone National Park’s Norris Geyser Basin was once a small hot spring, a blue pool that occasionally erupted.

But in 1985 the geyser changed: The Porkchop began “spouting,” sending plumes of water 20 to 30 feet high from a mostly dry crater. The roaring sound of the explosion could occasionally be heard from over a mile away, and in winter the spray created ice cones more than 20 feet high.

Then, on the afternoon of Sept. 5, 1989, the geyser changed again — quickly. Eight visitors watched as eruptions became 60 to 80 feet tall. Then the geyser exploded.

The blast sent the silica deposit around the geyser into the air, uprooted rocks as large as 3 feet across and chucked smaller material more than 200 feet away. It left a 10-foot crater.

“Fortunately there was no one close enough to be hurt,” Michael Poland said. But he said, “if that had happened at the height of tourist season, when there were a lot of people that were standing nearby, people might have been injured.”

Poland is the scientist in charge at the Yellowstone Volcano Observatory, which monitors the active supervolcano that dwells beneath the Earth’s surface in America’s first national park.

Poland and other scientists from the National Park Service, University of Utah and University of Wyoming have spent years setting up a network of seismometers, which track earthquake activity; GPS stations, which track how the ground is moving up and down; and stream gauges, which measure the temperature, flow and chemistry of the park’s rivers. Their goal: to understand how the Yellowstone Caldera is acting and predict any substantial changes, which are unlikely.

But now, with that macro, caldera-wide monitoring network set up, Poland and other Yellowstone volcanologists are gearing up to try to better understand smaller geographies like the Norris Geyser Basin.

Ditto the mechanics of hydrothermal eruptions, like the Porkchop Geyser explosion, that pose a greater risk to human health and safety than less likely large-scale super volcano activity.

The focus on smaller hydrothermal phenomena is a significant part of the Volcano Observatory’s new 10-year plan to improve monitoring and hazards assessments of volcanic, hydrothermal and earthquake activity in the Yellowstone Plateau. That plan is broken down into two parts: “backbone” and hydrothermal monitoring.

Plans for “backbone” monitoring include beefing up the larger, caldera-wide system that’s already in place. The hydrothermal monitoring is new and geared toward tracking activity within Yellowstone’s individual thermal areas and geyser basins.

“We have that bigger-picture view nailed down pretty well,” Poland said. “It’s time to actually go after the smaller-picture stuff.”

Ken Sims is a National Geographic Explorer and University of Wyoming professor who researches volcanoes around the globe and has represented the university on the Yellowstone Volcano Observatory since 2013.

The expansion of monitoring in smaller geyser basins is, in part, about establishing a “baseline,” he said.

“You can’t forecast that someone’s going to have a bad heart without understanding how the heart works and having EKGs and various blood tests to look for plaques,” Sims said. “We’re at the stage where we’re trying to better monitor these systems so we can better forecast those events.

“Part of it is just knowing what the steady state is so you know what might be aberrant, might be different,” Sims said.

In smaller geyser basins, Poland said, satellite monitoring data indicates that the ground may rise during the summer when there’s more water present and fall in late summer when that water drains away. More detailed monitoring could confirm that, as well as tip park managers off if “an individual geyser basin is ever doing something weird,” like getting ready to explode.

Hydrothermal explosions like the one at Porkchop Geyser are caused by water flashing to steam and immediately having to escape its container.

“That can create a small explosion and spray boiling water, mud and rocks over a small area,” Poland said.

Such explosions are relatively common, happening once every year or two in the backcountry, according to the U.S. Geological Survey. However, Poland said, they’re an “under-appreciated hazard” in the front country and “one that’s far more important on human time scales than a volcanic eruption.”

Poland said the Volcano Observatory hopes to set up the first geyser basin monitoring station in Norris Geyser Basin in 2023.

More monitoring stations would likely come online in the following years once volcanologists evaluate how well the first one works.