Construction work to repair and replace roads devastated by a June flood in Yellowstone National Park is moving quickly, according to officials, and will be accessible to regular traffic in … 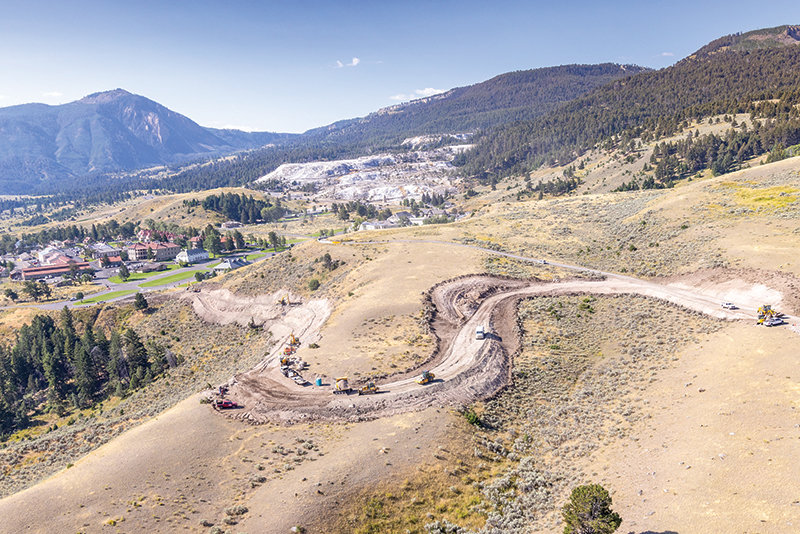 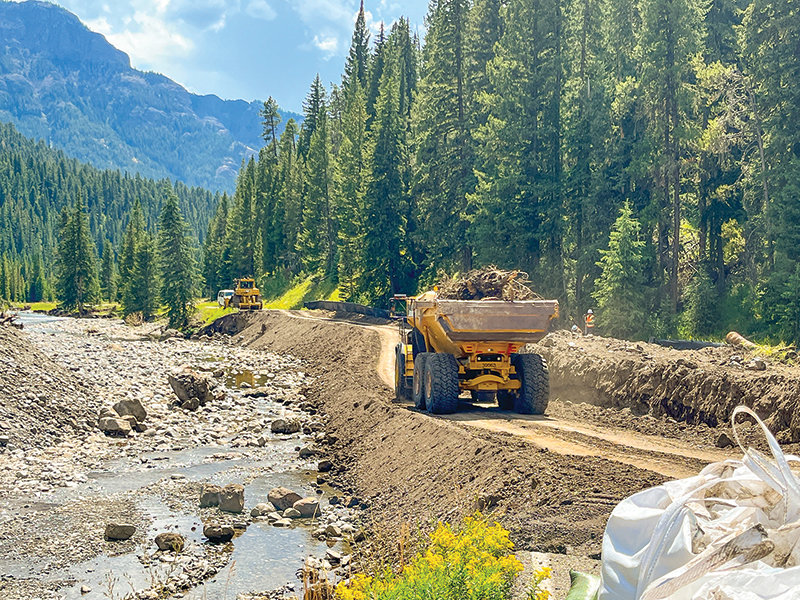 The Northeast Entrance Road undergoes reconstruction after five sections of the road were lost in June flooding. Temporary repairs are expected to be finished in mid-October.
Photo courtesy Cam Sholly/NPS
Previous Next
Posted Tuesday, September 6, 2022 8:15 am
By Mark Davis

Construction work to repair and replace roads devastated by a June flood in Yellowstone National Park is moving quickly, according to officials, and will be accessible to regular traffic in October.

“While permanent reconstruction of both the North and Northeast entrance road corridors will be multi-year efforts, the park has been pressing to have substantial temporary solutions to reconnect these areas before the upcoming winter season,” the Public Affairs Office said in the release.

Yellowstone Superintendent Cam Sholly told the Tribune in August that he had “very aggressive timelines to get these temporary repairs completed.”

Now, with progress moving as expected, Sholly said the work is “exceeding expectations.”

“We will continue to update the public on progress as we move into fall but fully expect that regular vehicle access will be restored by mid-October with additional work occurring afterwards as long as weather permits,” he said.

The Old Gardiner Road, which connects Mammoth Hot Springs to the North Entrance in Gardiner, is expected to be passable for regular traffic by Oct. 15, with additional improvements continuing beyond that date.

“This temporary road will allow for regular vehicle access to travel between Mammoth Hot Springs and Gardiner going into the winter season,” the Public Affairs Office said in the release.

Efforts to repair five damaged sections of the Northeast Entrance Road are underway and are also expected to be passable by Oct. 15, allowing for regular vehicle access to travel between Tower Junction and Cooke City/Silver Gate.

The construction projects led to a plan by park officials to plow U.S. Highway 212 from Cooke City to Wyo. Highway 296, commonly referred to as “the plug.” But Sholly said there would be no need to plow should the work progress as expected.

“If repairs are completed on time and the North Entrance Road is completed on time, then we likely will not plow the plug,” Sholly said. “But we need to have that plan in place in case it snows before we’re done repairing the road.”

That could be good or bad news, depending on individual points of view. A recent survey showed a majority of Northeast Entrance gateway community residents and business owners want the plug plowed permanently, opening winter access to Park County businesses and emergency services. But winter sports enthusiasts and businesses who cater to them hope to keep the status quo of access from the east to be for snowmobiles only.

Sholly said the temporary repairs are the immediate priority, but building infrastructure that can survive future floods is the end goal.

“We want to make sure [the roads] are safe for travel, but we also want to keep an eye on the future … where the roads are vulnerable to future flood events. We had several sections of road that miraculously didn’t wash out that were right on the river. I think it would be almost derelict if we didn’t evaluate sections of road that could potentially be flooded out in future events.”

Sholly said there are sections of that road that need to be moved away from the river to make them less vulnerable. Construction issues will be common in the next few summer seasons, including several bridge issues the park had planned to attack prior to the flood event. The park had earmarked $155 million to improve roads, parking lots and overlooks prior to the flood.

Three large road construction projects were scheduled in 2022; all which were expected to cause major delays. The three projects included the removal and replacement of the Lewis River Bridge, refurbishing 22 miles of the Grand Loop Road between Old Faithful and West Thumb, and replacement of the Yellowstone River Bridge. Two of three projects were expected to include overnight closures and would take years to fully complete in some cases.

“Let’s get [gateway communities] reconnected, let’s get them as safe as possible, and then we’ll really put our efforts toward long term planning,” Sholly said.