A late season push has propelled the Northwest College women’s basketball team into the conversation for a first round bye in the Region IX playoffs. The Trappers continued their run of good … 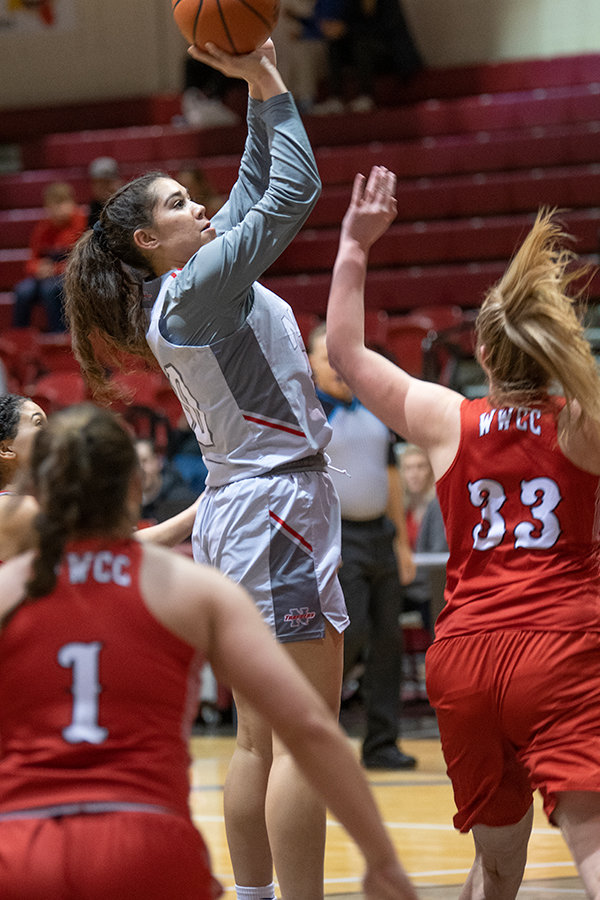 Trapper freshman Darla Hernandez pulls up for a jumper during a contest with Western Wyoming on Saturday. Hernandez and Northwest continued their strong play as they moved to 4-2 in Region IX North.
Tribune photo by Carla Wensky 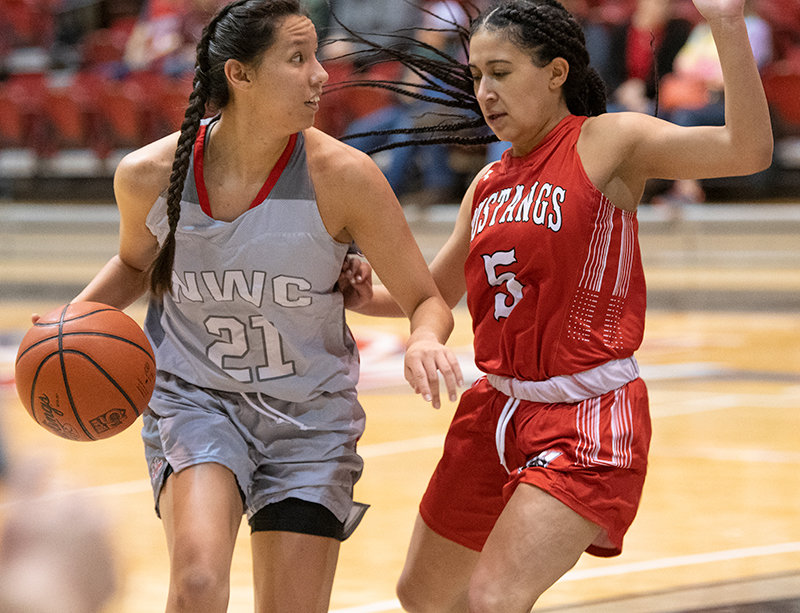 NWC freshman guard Nayeli Acosta looks for options as a Western Wyoming defender applies pressure. Acosta and the Trappers have the opportunity to earn the No. 2 seed in the Region IX tournament if they can beat LCCC and Central Wyoming on Wednesday, Saturday and Monday.
Tribune photo by Carla Wensky
Previous Next
Posted Thursday, February 17, 2022 8:10 am
By Seth Romsa

A late season push has propelled the Northwest College women’s basketball team into the conversation for a first round bye in the Region IX playoffs. The Trappers continued their run of good form defeating Eastern Wyoming on the road 63-60 and holding off Western Wyoming at home 63-58.

When the two teams met in their first matchup in Powell, the Lancers blitzed the Trappers early and jumped out to a quick lead. This contest started out at a different pace.

Despite low turnovers, neither team started strong, as Eastern held a slight 6-4 lead midway through the first quarter.

“Turnovers will pretty much make or break us the rest of the season,” Trapper head coach Lauren Davis said.

The Trappers took the lead after good ball movement led to an open 3-pointer from freshman Nayeli Acosta to make it 7-6. That basket sparked the offense the rest of the quarter, as Northwest took a 14-10 lead heading into the second.

A quick scoring outburst to start the quarter saw the Lancers tie the contest at 18. Neither team was able to gain enough momentum to create separation, as the largest lead of the half was four. The Trappers went into the locker room trailing 29-28.

Both teams struggled again early in the second half, as the Lancers led 35-31 midway through the period.

Eastern pushed its lead to six points at 41-35, before a 7-0 run by the Trappers, capped by a 3-pointer by freshman Brenna Rouane. It gave Northwest the lead with a minute remaining, but it was short-lived: an Eastern basket followed by an NWC turnover gave the Lancers a 45-42 lead heading into the final quarter.

The Trappers took the lead on a 3-pointer by freshman Kiana Quintero with 5:25 remaining and held on; a basket inside by freshman Darla Hernandez made it 60-56 with 1:30 remaining.

The Trappers went 3-of-6 from the free throw line in the final minute, but an open, potentially game-tying 3-pointer by the Lancers hit the back of the rim and bounced out.

“We knew it was going to be really tough considering how close it was on our home court,” Davis said. “We came away with a road win which is tough enough to come by.”

Following their victory on the road, the Trappers returned home to take on Western Wyoming (4-21 overall, 0-8 Region IX North), which was still seeking its first region victory.

The first quarter started out strong for Northwest, which used a balanced attack to open up a nine-point lead early, 16-7.

Western pulled the game closer to end the quarter, but the Trappers still led 19-15 heading into the second.

A fast start in the second quarter was led by sophomore Kierra Cutright, who scored five points to help push the Trapper lead to 26-15.

NWC went into halftime leading by 13 after a 3-pointer by freshman Annie Mitzel with 36 seconds remaining.

The third quarter gave the Trappers trouble, as they shot 2-of-15 for the quarter, allowing the Mustangs to get back in the contest. After Cutright scored the opening basket to push the lead to a game high 15 points, Northwest went scoreless for more than three minutes.

Northwest still held a 12-point lead before the shooting woes began again. The Trappers went nearly six minutes without scoring, as Western pulled within a single possession at 43-40 with 52 seconds left in the quarter.

“We came out kind of slow, our offense was stagnant and we were kind of slow on defense,” Davis said.

A free throw by Cutright ended the scoring drought, and a jumper by sophomore Celina Tress pushed the lead back out to six to end the quarter.

The Mustangs pulled back within 53-51 with 5:43 remaining, but Northwest did not fold, never allowing the Mustangs to tie or take the lead.

The Trappers made four free throws in the final minute to pull away with a 63-58 victory.

“I was glad that we continued to fight to the end, and made some big free throws and some stops for a win,” Davis said.

Hernandez led the way for the Trappers with 16 points, Cutright had a 12-point, 13-rebound double-double, Mitzel had a season high 11 points and Acosta added 10.

Northwest has continued its strong push in the Region IX North, but is currently in a tight contest for the No. 2 seed with Eastern and LCCC.

With the season sweep over Eastern and a one-game lead in the standings, the Trappers have a significant advantage over the Lancers at the moment.

“I think we understand what is at stake these last three games and the importance of a bye,” Davis said. “I think we realize how important the bye is with our small numbers and for our rest and prep time.”

LCCC currently stands at 4-3, and was set to visit the Trappers Wednesday night in their first matchup of the season. (The earlier matchup between LCCC and Northwest in Cheyenne was canceled and unable to be made up due to COVID-19.)

After their matchup on Wednesday, Northwest will have a busy week, as they head to Riverton on Saturday to take on Central Wyoming (5-18 overall, 1-7 Region IX North).

The reverse fixture will then take place on Monday in Powell in a 5:30 p.m. makeup game that was postponed due to COVID-19.

If the Trappers win their final three games, they will be the No. 2 seed in the region tournament, and receive a first round bye, heading to Casper on March 3. If they don’t get a bye, NWC will play on Feb. 25 at home.