Surrounded by the many harvests taking place in August, a family outside of Cowley continues to quietly tend its wine grapes, despite the harsh Wyoming weather. 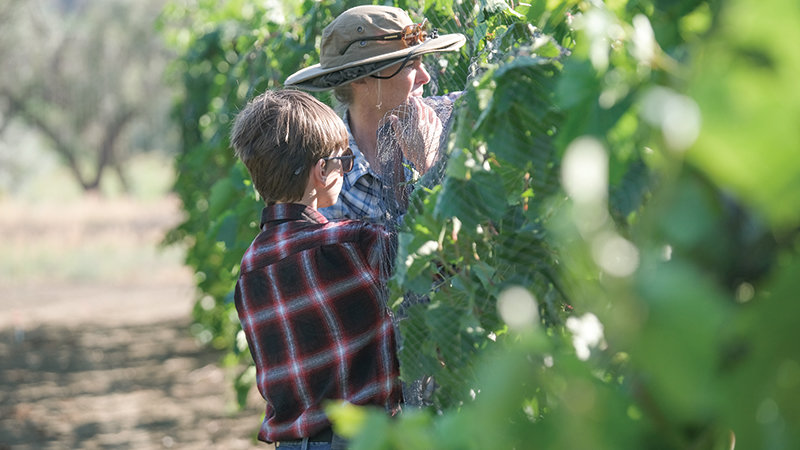 James Michael Laffin (left), and his mother Nicolle Laffin work diligently in the vineyard before the heat sets in.
Tribune photo by Braden Schiller 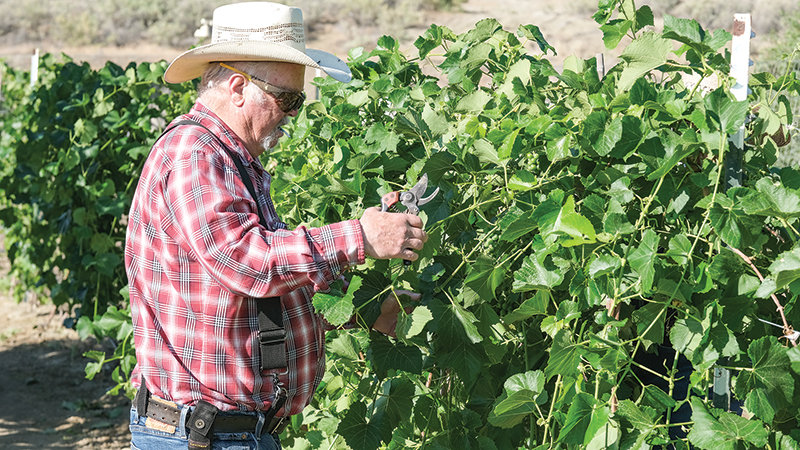 Larry Blair carefully grooms a grape vine. He is expecting their best harvest yet.
Tribune photo by Braden Schiller 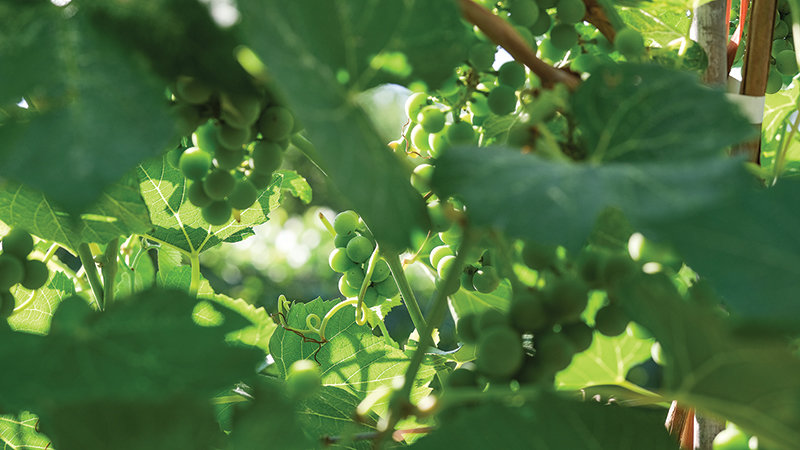 The Blairs grow special hybrid grapes for their wine. Unlike traditional wine grapes, these hybrids can withstand the harsh weather common in Wyoming.
Tribune photo by Braden Schiller 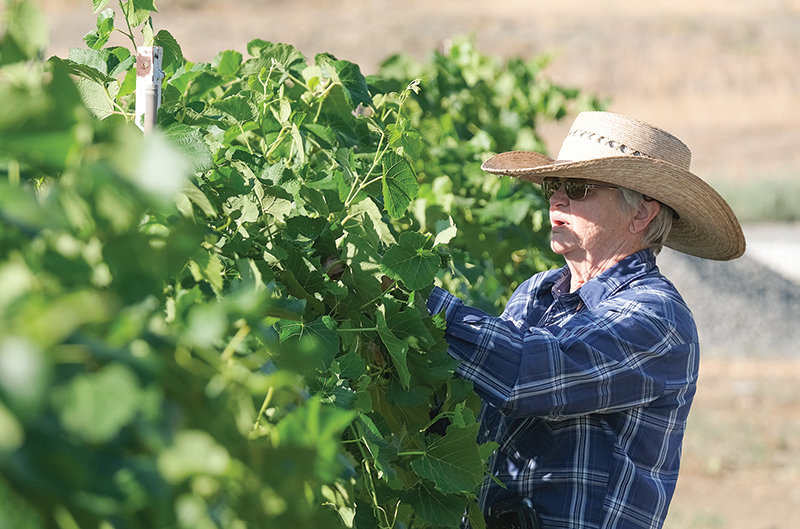 Nancey Blair works to maintain grape vines so that the cropload is easy to count and grapes are easy to access.
Tribune photo by Braden Schiller 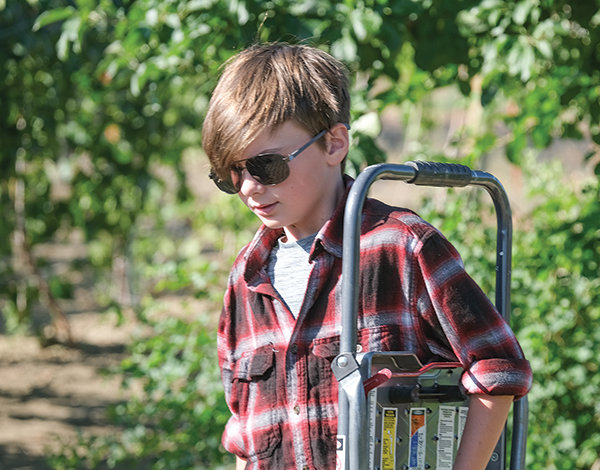 The Blair’s grandson, James Michael Laffin, carries a stepladder as he moves to comb the next row of vines.
Tribune photo by Braden Schiller
Previous Next
Posted Friday, August 12, 2022 8:20 am
By Braden Schiller

Surrounded by the many harvests taking place in August, a family outside of Cowley continues to quietly tend its wine grapes, despite the harsh Wyoming weather.

Larry and Nancey Blair first began their vineyard, Mustang Mountain Vineyard, in 2010, when they decided to move back to Wyoming after many years away.

Larry, who is originally from South Dakota, and Nancey, who was raised in Newcastle, Wyoming, are no strangers to managing a crop. They were even familiar with working in a vineyard after being part of a seasonal crew in Zillah, Washington.

“That’s where they learned how to do the infrastructure, and how to plant and start the vineyard. They had started that up 12 years ago — before we got here,” the Blairs’ daughter Nicolle Laffin said.

For Larry and Nancey, the vineyard was initially a hobby after early retirement.

“We knew we needed something to do.  We were fairly young retirees, so I loved the vineyards over in eastern Washington and had been over there several times,” Nancey said.  “So I thought that would be kind of fun to do just as a hobby. (We thought) that we would just have a hobby vineyard just to keep us busy.”

Laffin and her family joined Larry and Nancey at the vineyard in 2017 and everybody pitches in on the work. Laffin’s young son James Michael is even out assisting his grandparents with an incredible work ethic. Of course it has to be all hands on deck when you’re managing 1,000 grape vines and four different types of hybrid grapes.

From this, they make two red wines and two white wines.

Nicolle said that the winery  — which is only four years old — initially started slowly, but this year inventory is quickly being bought up.

While Concord grapes are commonly grown in the area, it is not common to see wine grapes grown in Wyoming, Laffin said.

“Mom and dad ordered hybrids, because you cannot get a regular varietal to grow here.  They will die,” Laffin said.

Laffin said a hybrid is when you cross a varietal (grapes of one variety that are the main grape in a wine) with other grape vines such as Concords, not necessarily a wine grape.

Mustang Mountain Vineyards grapes come from the University of Minnesota and can withstand temperatures as low as about minus 32 degrees Fahrenheit, making them perfect to stand up to the Wyoming weather.

It’s not all about being able to take a little cold, though, as the grapevines will take three to five years “for a grapevine to actually start producing grapes,” according to Laffin.

“Grapevines are crazy. They want to grow, (and) they want to grow wild. You gotta keep them under control. So we count the beds we want. We know which ones we want,” Laffin said. “And then we’re spending a couple of weeks going in there taking out shoots and buds that we don’t want. All they are is a drain on the vine itself.”

The vines also need to be “combed” which helps the vertical growing and aids in the process of counting the crop load.

Vintners not only have to maintain what comes up above the ground, but they also have to pay attention to the soil. The soil is tested periodically and  “amendments” will sometimes be made to keep that balance according to Laffin.

“You don’t want (the soil) too fertile.  Grapevines like the struggle,” Nancey said.

The grapes are ready to harvest in late August, a process that needs to be done in a matter of hours, preferably in the morning when it’s cool. This prevents bacteria and mold from growing on the grapes — which happens quickly.

“That’s the nice thing about how small we are.  If there’s something now that looks like it’s been damaged or looks like it’s going to have a problem, we can cut it out now,” Laffin said. “By the time we hit the winery, our crop is very clean.”

Currently, Mustang Mountain Vineyards is also working on a hard cider, which should be ready in the next month. Although the vineyard is on an abandoned apple orchard, apples are not yet grown on the property.

The Blairs have been considering planting an orchard not only for the cider, but also for the added benefit of providing a wind break and decreasing soil erosion.

Because the family is continuing to learn about maintaining a vineyard and refine its process “this is going to be the best crop we’ve ever had,” Larry said.