Sometime between the morning of Aug. 28 and 29 of last week, the water came back.

The Fort Laramie Irrigation Canal had set empty since July. The ditches were bone dry during the heat of the … 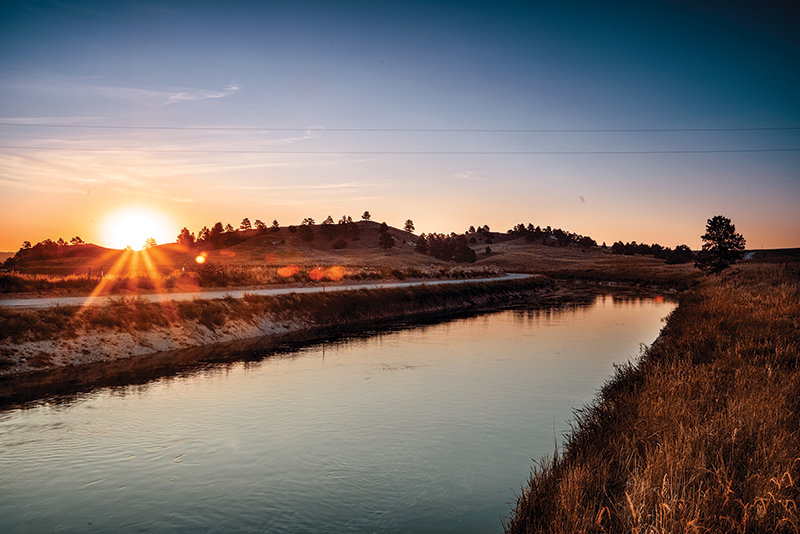 For the first time in more than a month, water is flowing in the Fort Laramie irrigation canal, thanks to a monumental effort by the Goshen Irrigation District, Gering-Fort Laramie Irrigation District, SAK Construction and numerous community partners. Water began flowing in the canal the last week of August. The canal had been dry since July 17, when a tunnel collapsed.
Photo courtesy Tom Milstead, Torrington Telegram
Posted Tuesday, September 10, 2019 8:05 am
By Tom Milstead, Torrington Telegram Via Wyoming News Exchange

Sometime between the morning of Aug. 28 and 29 of last week, the water came back.

The Fort Laramie Irrigation Canal had set empty since July. The ditches were bone dry during the heat of the summer — but slowly, the water crept back where it belongs.

That’s because the Goshen Irrigation District, SAK Construction and dozens of others in the community worked together on a temporary fix for a tunnel that collapsed on July 17. The collapse caused the water to back up, caused the canal to breach and brought a sudden halt to irrigation.

SAK contractors installed heavy-duty steel ribs every 4 feet inside the tunnel to reinforce the walls and ceiling of the tunnel, just a temporary measure while a permanent fix is determined.

“If it doesn’t carry what we want, we’d have to adjust something, whether it would be an additional pumping plant or an additional tube, or some type of major excavation through that half-mile of mountain to try to get that done,” Preston said recently.

GID board member Shawn Booth said the cost of a 13-foot diameter pipe would be enormous. The pipe could cost up to $2,000 a foot — some $4.4 million to sleeve the entire 2,200-foot tunnel. The pipe would have to be manufactured in Germany, and the shipping costs alone, he told the assembly, could be in the millions.

“We’re going to look at all of the options for a long-term fix,” Booth said. “We’re looking at the funding for that, too. We obviously can’t do it without that.”

While there is water in the canal, it’s going to be too late for producers to expect much from some of their key cash crops. However, Xin Qiao, Irrigation and Water Management Specialist at the University of Nebraska Panhandle Research Center in Scottsbluff, said there may be some hope for a sugar beet harvest.

“Beets should retain more than 40 percent of average yield,” Qiao said. “It’s too late for corn.”

He said farmers could take advantage of the water to help rebuild the moisture profile in their fields, but need to be careful not to overdo it.

The United States Department of Agriculture ruled in mid-August that crops lost because of the collapse are insurable. Producers were advised to check with their crop insurance agents and Farm Service Agency officials before deciding how to proceed.