Under or overfunded? House District 25 candidates disagree on education

State Rep. Dan Laursen, R-Powell, and write-in challenger Justine Larsen agree that Wyoming’s public education system is critically important and that the state has good teachers. But the two …

Under or overfunded? House District 25 candidates disagree on education 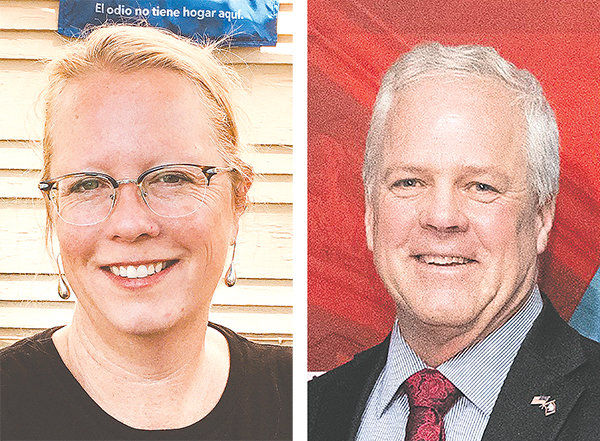 State Rep. Dan Laursen, R-Powell, and write-in challenger Justine Larsen agree that Wyoming’s public education system is critically important and that the state has good teachers. But the two Republican candidates for House District 25 sharply differ on how much funding K-12 needs.

Laursen, whose wife is a longtime teacher in the Powell school district, believes the state can reduce budgets for local school districts while still protecting education.

“Our kids are well-educated. We spend plenty of money in that,” the three-term representative said at a July 29 forum in Cody. “They can find some money savings and take a little cut. The rest of the agencies … in government have taken cuts, and the counties and the cities.”

Laursen added that administration might be one of the areas that needs to be cut.

“They get paid a heck of a lot of money,” he said of school administrators. While some argue that cutting pay would make it difficult to find qualified people, “I think there’s individuals out there that would come and could run a school district just fine,” Laursen said.

In contrast, challenger Larsen, a Powell paraeducator, raised concerns about schools not receiving funding for mandates related to school security and safety.

“As we increase the need for safety in our schools, whether it be health safety, mental health safety or physical safety in protecting our children, that is not something that can go without funding,” Larsen said at the Cody forum.

She said local school administrators have spent “so much effort” to ensure the safety of children. She added that schools help youth with food and family security as well and sometimes provide aid after school.

“The schools provide so much in preparing our next generation,” Larsen said.

Further, after completing a Legislature-required accounting of every minute of her day, “It was absolutely enlightening to see how many minutes and hours of my week I donate and that go uncompensated,” Larsen said. “So in terms of cutting, that is going to be a tough road.”

Rep. Laursen and challenger Larsen have also shared widely divergent viewpoints on how the state should react to the current economic downturn.

Larsen says she wants to see more industry in Wyoming “that is stable that will not go through these boom-and-bust cycles” present with the extractive industries.

Expecting that oil and coal can support another generation like they have in the past “is wishful thinking,” she said at a forum in Powell last week.

“We need the stability those industries bring, but we must be mindful of the day they no longer can,” she said. “Our job is to make it a softer landing by diversifying.”

Larsen said she supports new transmission lines to bring in power from other states and potentially open up Wyoming to “energy-intensive industries that have looked at other locations in the past.”

“Wyoming needs to be ready for the next big thing in energy,” Larsen added, suggesting that could be “green nuclear” power.

Meanwhile, Rep. Laursen stressed the continuing importance of the state’s extractive industries and that he hopes to reduce regulations.

Laursen has also said the state needs to advocate for trona and natural gas, with opportunities for foreign markets for Wyoming’s minerals.

“I have hope,” he said. “I am optimistic that we’re going to come back. It won’t take very long.”

He predicted that the entire economy will rebound if President Donald Trump is re-elected and Wyoming’s tourism will bounce back if COVID-19 goes away. Laursen also is hoping to see some beef slaughter plants opened in the state.

The lawmaker has taken a no new tax pledge for the next two years and described his current aim in the Legislature as cutting expenses and reining in government.

Challenger Larsen said her focus would be “protecting our most valuable resources: our children’s education, our aging population, our beautiful lands and diversifying our economy.”

Another candidate, Chris Good of Powell, appears on the Aug. 18 Republican primary ballot as running against Laursen, but he has withdrawn from the race, leaving the incumbent and write-in challenger Larsen in the field.