Avian influenza has once again been discovered in Wyoming. The Wyoming Game and Fish Department’s Wildlife Health Laboratory, in cooperation with UW’s Wyoming State Veterinary Laboratory, … 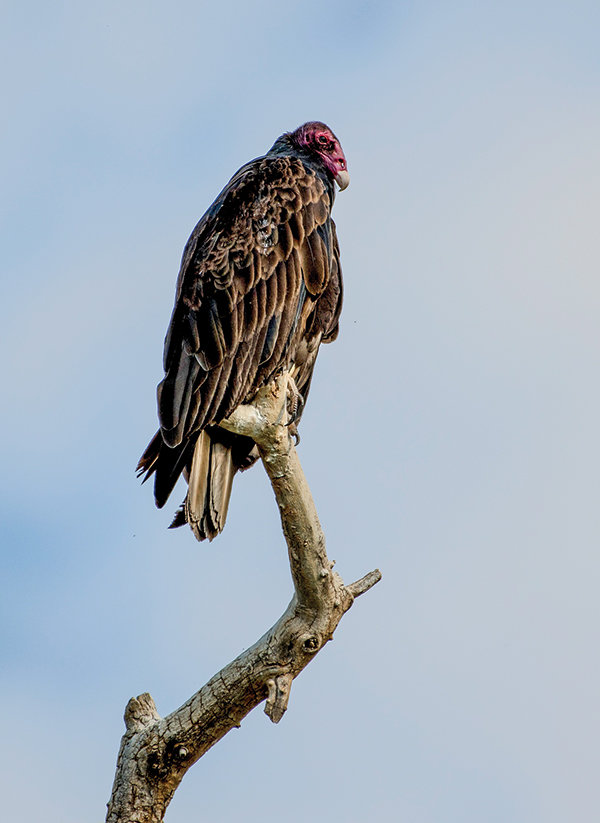 A turkey vulture perches on a dead tree near some roadkill. These large birds ride thermals and use their keen sense of smell to find fresh carcasses, according to the Cornell Lab of Ornithology. ‘They are a consummate scavenger, cleaning up the countryside one bite of their sharply hooked bill at a time, and never mussing a feather on their bald heads,’ the lab said in a chapter about the common bird in Wyoming.
Tribune photo by Mark Davis
Posted Thursday, September 29, 2022 8:10 am
By Mark Davis

Avian influenza has once again been discovered in Wyoming. The Wyoming Game and Fish Department’s Wildlife Health Laboratory, in cooperation with UW’s Wyoming State Veterinary Laboratory, has documented the strain of the virus in eight wild birds since Sept. 16, including two turkey vultures at the university.

The highly pathogenic virus, which occurs mainly in birds, is extremely contagious. The virus can be deadly, especially in domestic poultry. Since December 2003, an Asian HPAI H5N1 virus has resulted in high mortality in poultry and wild birds in Asia, the Middle East, Europe and Africa.

This year, thousands of wild birds have been discovered and nearly 46.5 million poultry have died from the virus or killed out of caution.

There has only been one confirmed case of human infection in the United States, but people should continue to exercise caution in handling sick or dead birds, the vet laboratory advises.

This comes as Wyoming is again documenting cases of HPAI in wildlife after a lull since early June. In Park, Big Horn and Washakie counties, wild birds were discovered to have died from the virus, prompting concerns.

The Game and Fish began monitoring for the virus’s presence in wild populations early in 2022 and expected to see HPAI in wild birds after it was identified in domestic flocks in the state, said Hank Edwards, Wildlife Health Laboratory supervisor.

In April, Game and Fish officials in Sheridan euthanized the department’s brood stock of pheasant out of an “abundance of caution” after officials discovered dead turkeys near their captive flock tested positive for the virus. None of the birds raised by the farm were found to be infected, but the department decided it was necessary.

“With the amount of wild birds that are around the farm, we were concerned about [the virus] getting in the bird farm,” said Dan Smith, the department’s Wildlife Division and Cody Regional wildlife supervisor.

“There was no indication that any of our birds were sick and none tested positive. But had we got to that [point], it would have been too late. So this was a preemptive action,” he said.

The farm raises approximately 14,000 pheasants to be released in hunting areas, including in the Big Horn Basin. Officials were able to collect eggs and started from fresh after the spring migration of wild birds was over.

The resurgence of HPAI is likely due to exposure from fall migratory birds; the peak of the fall migration in Wyoming is late September through mid-November.

Since being detected in the U.S. in January, the virus has been detected in wild birds in 46 states and poultry in 40 states.

If you have domestic poultry or pet birds that are dying or ill, contact your veterinarian who can evaluate the birds to determine if they may be infected with HPAI and arrange to submit appropriate samples for testing. You also may call the Wyoming Livestock Board at 307-777-8270 or 307-777-6440.

The Game and Fish Department maintains an up-to-date map of wild birds diagnosed with HPAI in Wyoming on the agency’s website.