The Trapper men’s basketball team came out of their longest road trip of the season with a positive record, after taking on two academy teams and the No. 1 ranked team in the nation at the Salt … 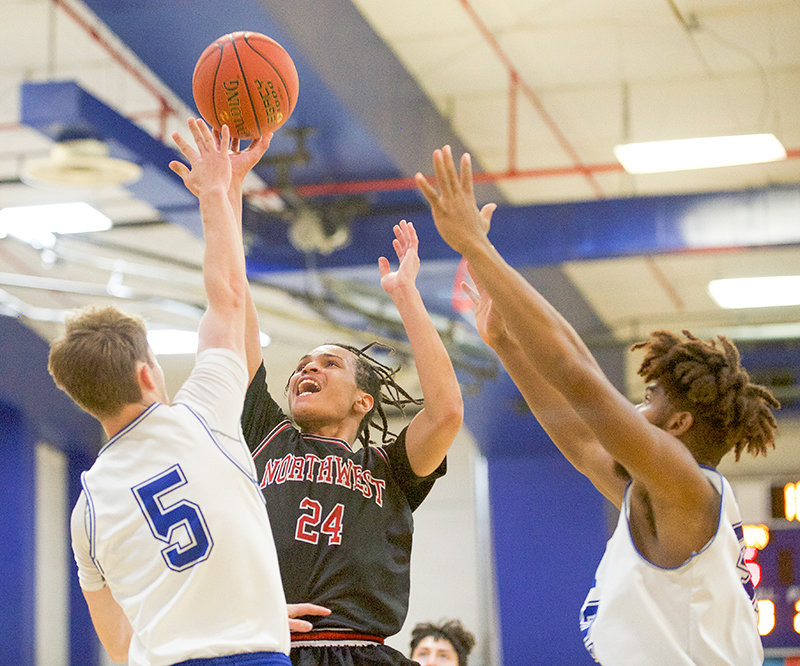 NWC freshman guard Bryson Stephens goes up hard for a layup against Miles City on Nov. 18. Stephens led the Trappers in scoring during their weekend trip to Salt Lake City, averaging 23.3 points per game.
Tribune photo by Seth Romsa
Posted Tuesday, December 7, 2021 8:15 am
By Seth Romsa

The Trapper men’s basketball team came out of their longest road trip of the season with a positive record, after taking on two academy teams and the No. 1 ranked team in the nation at the Salt Lake Community College (SLCC) Bruin Classic.

The Trappers’ (8-5) first matchup of the weekend was against the Real Salt Lake (RSL) All-Stars, and Northwest came out of the gate slow.

Trailing 19-6 early, the Trappers used a 20-8 run over the next six minutes to make the game close halfway through the first half.

Beginning to force turnovers, the Trappers outscored the all-star team 35-21 the rest of the first half, posting their highest half-time point total at 65-50.

The second half started like the first half ended, as the Trappers came out with a purpose and outscored RSL 28-12 in the first eight minutes to take full control of the contest.

Northwest finished with a 121-84 victory over the all-star team.

Gabriel Gutierrez and Bryson Stephens both led the Trappers with 25-point double-doubles, as Gutierrez grabbed 11 rebounds and Stephens added 10 assists.

Other Trappers scoring in double figures were Juan Camargo with 22, Alex Avila with 15 and Langrehr with 13.

Going into Friday after a comfortable victory on Thursday night, the Trappers matched up against the top-ranked team in the NJCAA, the SLCC Bruins (10-0).

“They are the number one ranked team in the country for a reason,” Trapper head coach Jay Collins said. “They have made top 25 teams look pretty mediocre.”

That trend continued as the Bruins jumped out to a 4-0 lead off two dunks and a steal, which forced a quick timeout from Collins.

Throughout the season, an early timeout for the Trappers has given them the ability to settle down and battle back into the game if they’ve had a slow start. This time was different.

SLCC continued their early pressure on the Trappers and jumped out to a 14-2 advantage after three minutes.

Turnovers were a constant problem for NWC in the first half, as SLCC forced them into 16 of their 25 in the opening frame, which allowed the Bruins to coast for much of the game.

The Trappers outscored the Bruins over the next six minutes to make it 30-20, but the Bruins went on a 15-0 run to make it a 25-point game.

After scoring 20 points over the first nine minutes of the game, the Trappers were only able to muster 10 points the rest of the half and trailed 76-30 at halftime.

With the Bruins running away with it, Collins sought to use the rest of the contest as an opportunity to learn and grow as the Trappers head into their final games before the Christmas break.

“The way we approached the game was not conducive to ‘covering the spread’ but we wanted to get better at what we do,” Collins said. “The score looked bad and we could have kept it closer, but that is not going to help us win games in conference.”

The second half was met with renewed energy from Northwest as they battled basket for basket with SLCC to an 87-41 score over the first four minutes. The rest of the contest remained relatively even, as the Trappers went on to lose 133-79.

Leading the Trappers in scoring was Camargo with 24, followed by Stephens, who added 22 and eight assists.

“He [Stephens] is starting to really assert himself, and I think his confidence is getting better and better,” Collins said.

The Trappers were outrebounded 48-28 and were outscored in the paint 90-36.

Coming off their loss on Friday night, the Trappers tried to regroup and get back on track against Taylor Made Prep, an academy team from Arizona.

“We came out with a big game hangover from that game the night before,” Collins said.

The first three minutes were back-and-forth with the Trappers holding a small advantage at 6-5.

With the two teams battling with runs, the Trappers took a 24-17 advantage with 8:30 remaining. The close contest was broken open on a dunk by Camargo with 5:30 left, part of a 22-8 run by the Trappers that closed out the half and put them up 53-34 at halftime.

In the second period, Taylor Made pulled to within single digits off two free throws, 69-60, before Northwest began to pull away.

Getting back out on transition allowed the Trappers to go on a 17-3 run to put the contest out of reach and NWC pulled away for a 112-84 victory and a 2-1 record on the weekend.

Stephens led the Trappers with 23 points, and was joined by double figures by Avila and Camargo, who both had 18, Gutierrez (17) and Vladimir Vondra (12).

The Trappers will return to the Cabre Gym this week for their first home contests since their season opener against the Rocky Mountain JV on Nov. 6.

The Trappers will have two contests against the Northwest Alumni All-Stars, with the first contest on Friday at 5 p.m. and the second on Saturday at 2 p.m.

After the two all-star games, the Trappers will get a rematch against Williston State — who beat NWC 98-85 in North Dakota last month — at 1 p.m. Sunday.

Collins wishes that the rematch against Williston was up first, but he’s hoping the Trappers can come out competitive on Sunday after the two alumni matches.

“Whoever did that scheduling — that’s me — needs to be fired,” Collins joked.

The coach said he hopes to see a marked improvement in the team from last weekend heading forward, as they will be able to practice for a full week before playing at home for the first time in more than a month.