2022 has not been kind to the Trapper men’s basketball team. They traveled to Western Wyoming and Laramie County Community College (LCCC), dropping both contests and stretching their losing … 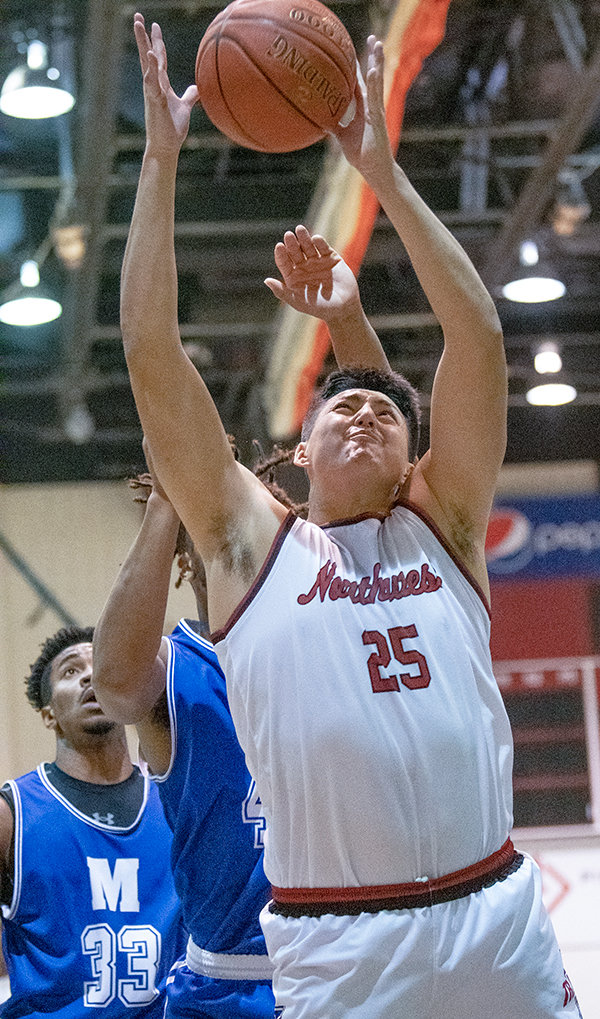 2022 has not been kind to the Trapper men’s basketball team. They traveled to Western Wyoming and Laramie County Community College (LCCC), dropping both contests and stretching their losing streak to six games.

The Trappers took advantage of a slow start by Western. They grabbed a 13-6 lead in the first four minutes, thanks to an intentional foul against Juan Pablo Camargo that gave the Trappers free throws and the ball.

NWC head coach Jay Collins said that the Trappers’ plan was to force Western to shoot tough 3-pointers, believing that was one of the weaker parts of Mustangs’ game. However, Western went 7-of-13 from 3-point land during the extended run.

Meanwhile, the Trappers went cold. A basket by Vladimir Vondra at the 10:45 mark was their last basket until a 3-pointer by Zane Langrehr with 4:10 left in the half.

Northwest went into halftime down 49-26. The second half continued much like the first, as Western opened up a 34-point lead midway through the period. They finished with a 91-57 victory.

The Mustangs were spurred by a large lead on the boards, outrebounding the Trappers 55-26 — including 18 offensive rebounds.

“We were outplayed in every facet of the game in that matchup,” Collins said.

Camargo was the only Trapper to finish in double digits, as he put up 18 points and eight rebounds on 7-of-16 shooting.

On Saturday in Cheyenne, the Northwest men were looking to rebound for their first conference win of the season against LCCC (12-9 overall, 3-1 Region IX North).

Northwest held a slim 13-10 lead after the first five minutes and began to get the ball inside more often to their post players — something Collins feels they need to do going forward.

“I think that the first 19:30 minutes of the first half were some of the best minutes we played all year and hopefully found a little bit of our identity by throwing it down low to our big guys,” Collins said.

However, the half ended on a sour note, as the Golden Eagles scored twice in the final 20 seconds to make it 51-39.

“If we had finished the half better, had not had two turnovers and empty possessions, then maybe the lead would have been 20 and they would not have been in striking distance,” Collins said.

LCCC came out firing in the second half, reducing the lead to six points within the first three minutes, 55-49.

Northwest withstood that run, with a Camargo layup again giving the Trappers a 15-point lead with 14:21 left. However, LCCC used the next five minutes to go on a 17-5 run behind hot 3-point shooting and guard Xavier McCord, who averages 17.6 points per game.

“McCord is a top player in the region,” Collins said. “We tried mixing up defenses and nothing was able to slow him down for a while.”

The Golden Eagles took a 78-72 lead with 5:13 remaining, as the Trappers searched for answers on the offensive end of the floor. LCCC continued to make free throws and pushed the lead out to double digits at 84-74 behind a 22-of-30 effort from the stripe.

Meanwhile, the Trappers went 12-of-23 from the line.

“I think it also came down to us not making our free throws,” Collins said.

Northwest pulled within five points on a Gabriel Gutierrez layup with 2:09 left. They then forced a turnover, which led to a Alex Avila 3-pointer and a two-point game. A pair of LCCC free throws were answered by another Avila 3-pointer, making it 86-85 with 1:30 left.

A stop on the other end gave Northwest a chance to take the lead, but the Trappers could not take advantage. LCCC made a layup and two free throws to close out the game.

Camargo again led the Trappers with 20 points. He was joined in double figures by Bryson Stephens with 15, Gutierrez with 14 and Avila with 11.

Despite the rough start to 2022, the Trappers still have six games to improve their seeding heading into the Region IX tournament at the end of the month.

The Trappers were set to host Central Wyoming (7-11 overall, 0-4 Region IX North) on Wednesday, but that game was postponed. A home contest against Casper College (12-10 overall, 3-1 Region IX North) is scheduled for Saturday at 4 p.m.

“I told the guys, despite being 0-4 in region, we are at home for four of six games and our last region game is at Central,” Collins said.

The coach said he believes there just simply is not a bad team in the region and told his players that anybody can come out and beat anybody on a given night.

Collins and the Trappers will hope to get back on track, as they try to make the push to host a playoff game in just three week’s time.