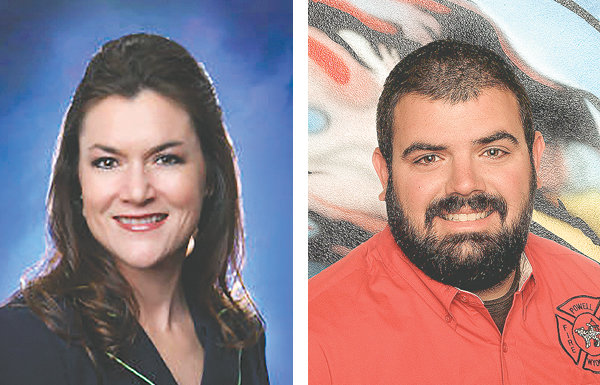 Both sets of candidates will advance to November’s general election, where they will face off again.

Spencer said she doesn’t have any plans to do any campaigning. In the coming months, she’s going to be putting her energies into her position as the Powell High School freshman volleyball coach.

“I’m focusing on the girls right now,” she said.

Streeter said he, too, was pleased with the results and was looking forward to the campaign ahead. Streeter has been attending the city’s regular council meetings to learn more about the issues that come before the council and how decisions are made.

Hovivian similarly said he was happy with the outcome on Tuesday’s primary election and planned to get out and do more campaigning. He hasn’t been able to do much to date, as he works at his construction job from 6 a.m. to 5 p.m.. That’s on top of a part-time EMT position at PVHC.

Hovivian said he’s still learning about the issues and is open to any concerns Ward 1 constituents have.

Andrews said the results showed he has a “winnable campaign.” In the lead-up to the primaries, he campaigned for Powell City Councilor Scott Mangold, who is running for Park County commissioner.

“We weren’t even really campaigning yet. We were worried about getting everyone else elected,” Andrews said. “Now that’s taken care of, we can campaign for me.”

He plans to hit the street and meet with people.

“People should expect me to be knocking on their door and chatting with them person to person,” Andrews said.

The Ward 1 race also had six write-in votes, and Ward 3 had four write-in votes. Two other races were held Tuesday: Ward 2 candidate Floyd Young ran unopposed (picking up 517 votes) as did Mayor John Wetzel (1,233 votes). A total of 57 write-in votes (4.3%) were cast against Wetzel, with nine write-ins against Young (1.7%).

As of Wednesday morning, Park County elections officials were still combing through results to see if any eligible individuals received the three write-in votes needed to join those races.

The general election is on Tuesday, Nov. 3. Early voting starts at the Park County Courthouse on Sept. 18.