The four Republican candidates for Senate District 18 have differing ideas about how the State of Wyoming should tackle its budget deficit, with one contender calling for new taxes. 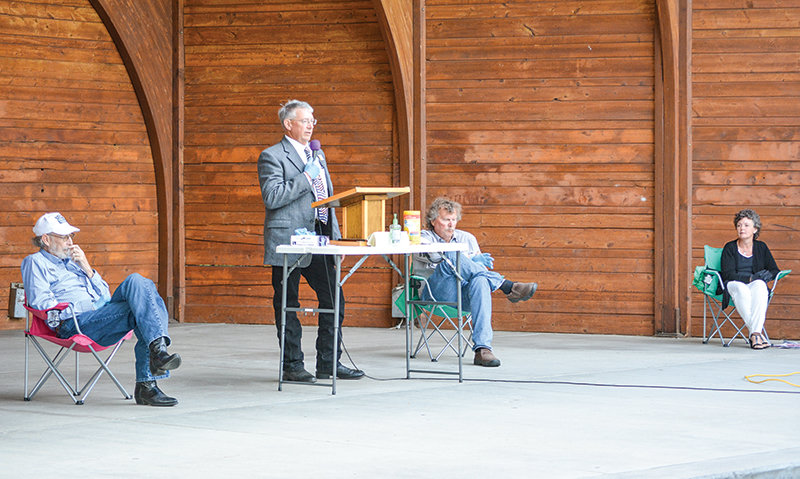 The four Republican candidates for Senate District 18 have differing ideas about how the State of Wyoming should tackle its budget deficit, with one contender calling for new taxes.

Wyoming leaders have talked about cutting agencies, jobs and services amid a projected $1.5 billion biennial deficit, Bell noted at an Aug. 4 forum at Washington Park. However, with that shortfall being equal to the combined salaries of every state employee, “we are not cutting our way out of this,” she said.

More recent projections of oil and gas productions are better than once feared, Bell said, “but we must increase revenue.”

She proposes both “a statewide funding model for community colleges, and a corporate income tax for foreign entities that do not have real properties in our state.”

“We also must energize our economy and be business ready,” she added, specifically endorsing blockchain technology and its applications for selling Wyoming beef.

Bell also reiterated her call for the state government to speed up its distribution of the $1.25 billion awarded to the state under the federal CARES Act, noting the COVID-19 relief must be spent by the end of the year.

Meanwhile, Jones cautioned against pursuing some new resources of revenue amid the budget crunch.

“We’re talking about marijuana in Cheyenne; they’re saying, ‘Hey, the taxes for marijuana, let’s make the state a drug dealer,’” Jones said. He has a long background in substance abuse prevention and is an outspoken critic of marijuana and legalization efforts, pointing to problems the drug has caused in other states.

“These are slippery slopes; let me tell you,” said Jones, who once worked as a state gaming agent in Mississippi.

He also noted that current projected deficits represent only what may occur and said “Wyoming has a lot of strengths in it.”

While coal may be down 20-30% permanently, he noted the fossil fuel can be also used for the developing carbon fiber industry; the state also has a large amount of trona and uranium.

“I firmly believe that the power of the future is uranium,” Jones said. “And if that is indeed true and these regulations take off, this will be the future of Wyoming.”

In another 18 months, he predicted that the state could be “back on top again.”

French also sounded an optimistic note, suggesting that the state’s current budget struggle “has everything to do with COVID.”

He noted that local barley contracts were initially cut in half because of decreased demand from shuttered bars, but have since been restored, while reduced travel has hit the many small businesses dependent on tourism. Minerals are also down, but “things are looking up” in more recent projections, he said.

French also noted that the state is only one month into a 24-month budget cycle and “a lot can change in the 23 months.”

“I’m optimistic,” he said “We’ll get through this. Wyoming people are proud, hardworking folks.”

As for what action he’d take, French said he wants to implement the recommendations from a recent state efficiency study that could save $230 million — which “would go a long way to helping our deficit.”

He also called for a general streamlining of state government.

“We need to be smarter, smaller, more efficient,” French said. “This COVID thing has just made us all aware of how big we’ve allowed the state of Wyoming’s government to get. It’s too big.”

Northrup also suggested that Wyoming’s current budget woes are tied to the pandemic and other temporary factors. He noted a price war took a toll on oil prices, a glut of natural gas drove down that commodities’ price, the ag industry is off 25 to 30% and then tourism was hit by COVID-19. The state, Northrup said, could use savings to address the current deficit.

“It’s the next biennium we have to worry about,” he added. “This budget, along with our savings and with optimism will be great. It’ll come through. But hope is not a strategy. We have to take decisive measures to make sure that we work this budget and get the state balanced.”

Northrup said the Legislature will need to find a way to refill the state’s saving accounts and reduce regulations for the oil and gas industry while helping it become more productive. He also said he’d like to see new slaughterhouses in the northern and southern parts of the state.

“We need these industries going and working so that people have jobs in Park County,” he said.

The four Republicans will face off in Tuesday’s primary election, with only the top vote-getter advancing to November’s general election.

World's Most Expensive Sneakers Will Order Your Pizza

Better Immunity is Just a Spray Away