Crisscrossing the open spaces between Cody, Powell, Lovell, Basin, Greybull, Worland — and everything in between — are miles of highways. To get to anything — whether it’s … 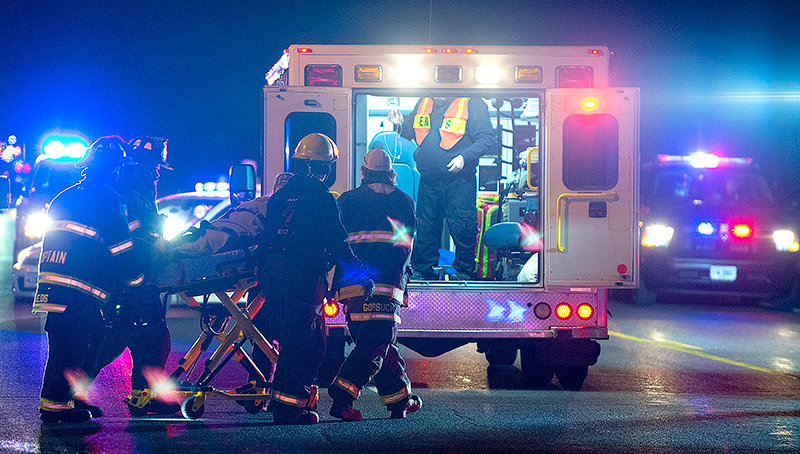 Emergency responders wheel an accident victim into an ambulance on Coulter Avenue in Powell in December. Medical transport services in the Big Horn Basin struggle to find enough staff and volunteers, and funding for training is limited. With ambulances costing up to $1 million to operate annually, it’s hard to cover costs for the small population of the Big Horn Basin, which is spread out over miles of gas-guzzling highways.
Tribune photo by Mark Davis

Dirk Dijkstal, section chief for the Health Readiness and Response at Wyoming Department of Health, conducts an EMS listening session in Thermopolis earlier this month. The session was one of several conducted around Wyoming by the department and the Governor’s Health Taskforce. Emergency medical professionals from around the Basin shared their challenges and solutions.
Tribune photo by Kevin Killough
Previous Next
Posted Tuesday, June 28, 2022 8:25 am

This is the first in a series on the challenges facing health care in the Big Horn Basin.

Rural health care providers across the country are facing all kinds of challenges, and the Big Horn Basin is no exception. Miles between providers and educational opportunities, difficulty recruiting health care professionals, and rising costs plague the industry. These problems are tied together with low and diminishing revenue to create a situation that threatens the sustainability of rural health care.

Despite the challenges, the Big Horn Basin is fortunate to have professionals and volunteers across communities who are doing all they can with their limited resources.

Crisscrossing the open spaces between Cody, Powell, Lovell, Basin, Greybull, Worland — and everything in between — are miles of highways. To get to anything — whether it’s shopping, schools, work or a doctor’s appointment — people have to drive a long way. Drivers spend a lot of time on the road with a greater risk for accidents. Not surprisingly, the Cowboy State ranks highest in the nation for traffic fatalities per capita.

For paramedics and emergency medical technicians responding to emergencies, those long miles mean more time and resources getting to patients and getting them to the hospitals.

In Wyoming, emergency medical services are not considered an essential service, which is true for all but a handful of states.

Unlike law enforcement, which is deemed essential, local and state governments are not required to provide support for ambulance services.

“When someone is breaking into your house, you expect law enforcement to show up. With EMS, nobody is obligated to come,” explained Scott Bagnell, Powell Valley Healthcare emergency medical services and emergency room manager.

This means emergency transport services have to look for other sources of revenue. Without a large population paying into the system, EMS is heavily dependent on federal and state support, both of which are decreasing. Federal support is encumbered by rules and regulations that make it difficult to get reimbursed for the full cost of services.

“The ambulance system is the worst business model you can devise,” said Scott Murphy, ambulance director for the North Big Horn Hospital District.

Since 2017, three 911 EMS transporting agencies in the Big Horn Basin — designated Trauma Region 5 — have been replaced by another agency, and two more have closed altogether. In addition, the Greybull Fire Department closed in 2005.

That leaves nine 911 ground transporting agencies to cover over 14,000 square miles — an area the size of the entire state of Connecticut.

While the number of agencies providing transport services decreased, the demand has increased. In 2016, Region 5 had 5,124 documented requests for services. Last year, that number had increased to 6,899, a nearly 26% increase.

This summer, Gov. Mark Gordon’s Health Taskforce and the Wyoming Department of Health held a series of listening sessions around the state for stakeholders working in emergency medical services, including one in Thermopolis in June for Region 5.

The task force wanted to hear about the challenges rural EMS workers face, where the strengths lie, how emergency workers are addressing shortfalls, and what are possible approaches to sustainability.

A couple of dozen EMS workers showed up to share their stories.

“These services are the lifeline of our communities,” Gordon said in a video address to the participants of the session.

Of all ambulance service calls, 911 responses make up nearly 70%, and more than a third of those are unpaid.

Arleen Campeau, chief nursing officer for PVHC, talked about how hard it is to get payment for ambulance services.

Many patients are self-pay with no insurance, she said, and Medicare and Medicaid have a labyrinth of rules and regulations that make reimbursement, as she described it, “pitiful.”

Now that gas prices are soaring, vehicles that get about 6 miles to the gallon are eating up hospital budgets.

“The fuel is just killing us,” Murphy said.

Most often, inter-facility transports do provide reimbursement, but they are also taxing on the time and resources of the transporting agency.

It’s 90 minutes one way to transport a patient to Billings, and that ties up the ambulance and staff for the full round trip. If 911 calls come in to PVHC while its ambulance staff is transporting to other facilities, they have to contact Lovell and Cody to see who has units available to respond to the call.

Murphy said the transfers to mental health facilities often do not pay, as the patients often have little insurance or income, and, Bagnell said, they’ll have to transport the same patient every few months.

Funding for mental health care services has always been a problem in Wyoming, and during the last legislative session’s round of budget reductions, cuts to mental health services ran deep.

“We understand they [behavioral health patients] need care as well. But what care are they getting when they arrive? Because we’re seeing them back in 30, 60, 90 days. And we’re doing it all over again,” Bagnell said.

Murphy said he grew up with traditional values, in a time when people felt obligated to give back to their communities. That’s given way to a generation much more focused on profitable careers.

“They’re fed by a different animal,” he said.

The National Fire Protection Association determined there has been an approximate 27% decrease in volunteers to first responder agencies since 1987. More and more, ambulance services are using paid professionals, but low wages and diminishing training opportunities create barriers to maintaining staffing levels.

Unable to pay high wages and attract adequate staffing, ambulance services place more demands on fewer people, which burns out the volunteers and staff they do have.

Bagnell said it’s hard enough, with limited revenues, to attract employees with competitive wages, but when the nearest Costco is a 90-minute drive away and housing options are limited, it’s even harder.

He said there’s a “honeymoon phase” when new staff members come in, but when the inconveniences of rural life set in, they often move on to other opportunities. All the time and expense that went into training them is lost.

“Then you start that process over,” Bagnell said.

The funding for training has also declined, meaning fewer classes are offered closer to home. Murphy said that in Wyoming, the community colleges were expected to be the primary providers of medical training, but for someone living in Lovell, it’s a 22-mile drive to get to classes at Northwest College.

He said Wyoming is missing a window to capture young paramedic recruits and establish them in EMS careers. When they can’t access training early on, they will move on to opportunities in other industries.

When the discussion turned to solutions, the participants had plenty of ideas on what they need to make the system work.

Murphy said with more support for training and education, they could train their own EMTs and paramedics, which would address staffing levels and maintain quality emergency care.

“We’re not looking for someone to come in and fix us. We can fix ourselves,” he declared.

A key strength, he said, is their “awesome” community support.

Bagnell said road-weary EMTs will go have breakfast at a local restaurant, and often someone will pay for their meal. As small a gesture as it might seem, it can really boost the spirits of exhausted ambulance staff.

Campeau said prevention can go a long way to help reduce demands on emergency systems. As an example, she pointed to better support for transitional care. When patients have the support at home they need after leaving the hospital, they’re less likely to need to return to the emergency room.

Agencies are also continuing to provide mutual support between themselves. There’s a strong “we’re all in this together” mentality, so when one agency needs help from another that can provide it, those resources get distributed across the system.

While state revenues resulted in cuts, some funding came down as a result of federal COVID relief funds.

Using American Rescue Plan Act funding, the state legislature appropriated about $15 million for emergency services, about $10 million of which is for pilot programs to investigate ways to improve access and reduce costs. That is all one-time funding, however.

Murphy said North Big Horn Hospital District purchased a van-type ambulance that requires less fuel and maintenance. These vehicles aren’t practical for daily 911 responses, but they can help a lot with inter-facility transfers.

If EMS were an essential service, it would require local and county governments to support it.

However, this may have limited potential. Paying for services would have to come out of the county’s mil levies, and 21 out of 23 counties in Wyoming are at their max levies.

Phillip Franklin, emergency medical services director for Cody Regional Health, suggested it might be better to resolve some of the systemic problems impeding the delivery of care before pursuing more public support.

“I’m not in favor of going to taxpayers and asking them to pay more for a broken system,” Franklin said.

The issues impacting ambulance services are just one set of problems facing rural health care. Nearly one in five Americans live in areas where critical access hospitals are their only option for care. Since 2005, 181 rural hospitals have closed.

“We’re in a system that’s not going to be sustainable if we don’t do something,” Murphy warned.