Republicans battle for the Legislature in today’s election

Republicans battle for the Legislature in today’s election 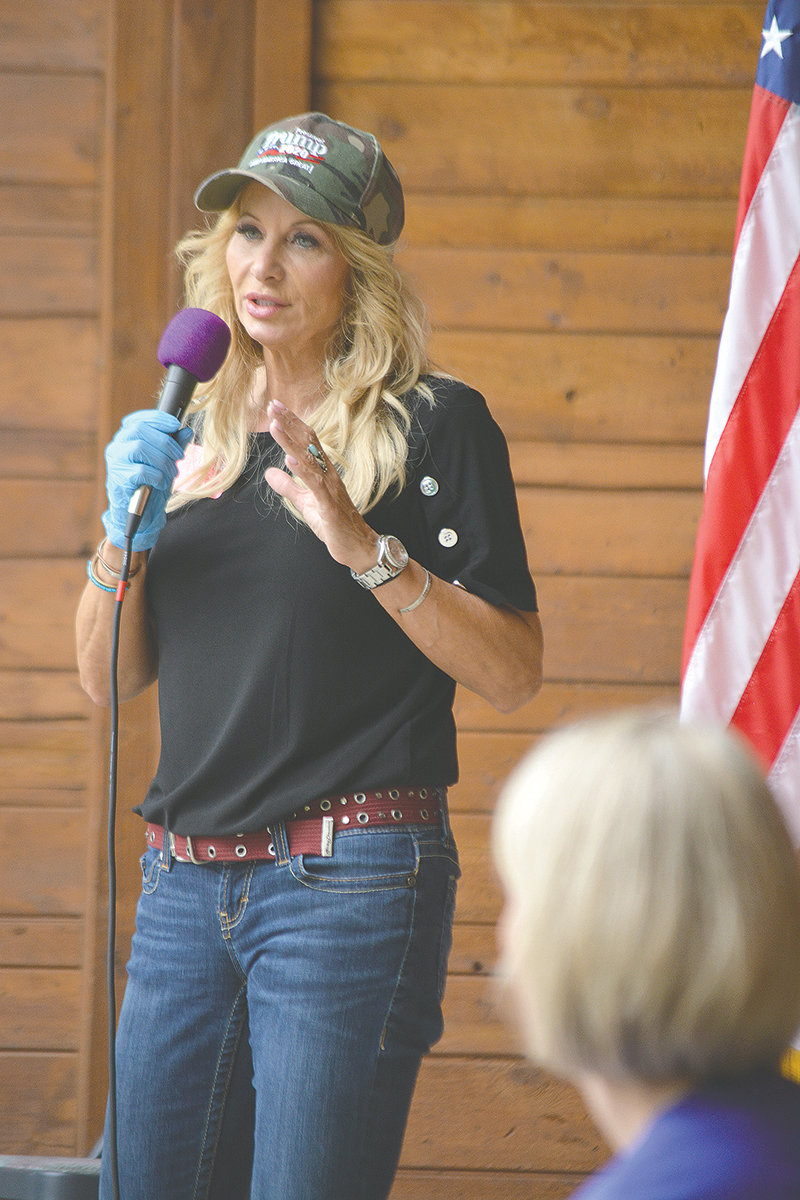 House District 24 candidate Nina Webber speaks during a July 28 forum at Washington Park, as the incumbent, Rep. Sandy Newsome, R-Cody, looks on. The two candidates, along with former Rep. Scott Court, are facing off in today’s primary election, being one of multiple contested legislative races that have drawn statewide interest.
Tribune photo by CJ Baker
Posted Tuesday, August 18, 2020 8:25 am
By CJ Baker

More conservative and moderate factions of the state’s Republican Party are putting up sizable amounts of cash as they grapple for control of the Wyoming Legislature — with Park County in the middle of the fight.

Campaign finance reports show that, as of early last week, more than $100,000 had been poured into three local legislative races. That included tens of thousands of dollars from individuals and groups outside of the county, who have been cutting big checks to try helping to tilt the Legislature one way or the other.

In Senate District 18, where a deep field of four Republicans are vying to replace longtime state Sen. Hank Coe, R-Cody, more than $49,000 has been committed or raised by the candidates. Former Park County Commissioner Tim French, current state Rep. David Northrup, Cody school board member Stefanie Bell and former park ranger Richard Jones are all vying for the seat.

In both races, independent groups ranging from gun rights advocates to realtors have spent thousands of dollars to support or attack candidates.

Similar storylines are playing out across the state.

Even in his bid for re-election to House District 25, a last-minute write-in campaign by Justine Larsen has quickly drawn endorsements, dozens of donations and underscored divisions between local lawmakers; both Reps. Newsome and Northrup are backing challenger Larsen.

Newsome said she and her husband, Bob, who donated $100 to Larsen’s campaign, have been longtime friends with the Larsen family.

“We believe that it is important for voters to have a choice,” Newsome added, “and we want to encourage new candidates to run, especially women.”

Northrup said he, too, supports Larsen’s candidacy because voters should have a choice. But he also finds fault with Rep. Laursen’s voting in the House.

“I don’t think that anybody who votes no on every bill that comes down the line, except for water bills, represents anybody,” Northrup said.

Laursen — who’s signed a pledge to not raise or add any taxes over the next two years, if he’s re-elected — has consistently opposed new tax measures and was among a handful of lawmakers who voted against this year’s budget bill.

“I don’t think that anybody in the community is a ‘no’ all the time,” Northrup said, “so I just think that it’s wrong when there’s stuff that comes up that would be an economical benefit to your community or your county, that you vote against it.”

The rift between the local lawmakers could be seen to some extent in their voting records in the House, but it’s been a more public split this campaign season.

Laursen fired the first volley earlier this year, when he joined a block of four conservative candidates that includes Webber — who’s challenging Newsome in HD 24 — and French, who, like Northrup, is seeking to represent SD 18.

“I just need some more conservative people down there, and my views and their [Newsome’s and Northrup’s] views don’t always match,” Laursen said.

As Laursen sees it, the number of conservative lawmakers is poised to drop from “about 13 of us” down to 10, and he feels “reinforcements” are needed. Laursen said he’s in the minority and by the end of each session, it’s hard to consider going back to Cheyenne after “getting beat up” by more moderate Republican leaders in the House. He’s also been frustrated with his bills and proposals getting shot down, such as a work requirement for able-bodied Medicaid recipients and putting up a video board in the House chambers to show how each member is voting.

Newspaper ads paid for by Rep. Laursen, French, Webber and Rachel Rodriguez-Williams of Cody — who’s seeking to assume Northrup’s current seat in House District 50 — proclaim the quartet as “the leadership team that will work for you.”

The ads specific to the race between Newsome and Webber have been nastier, with both campaigns going negative. Webber and her partner, Scott Weber, have been aggressively campaigning against the incumbent, seeking to paint Newsome as a liberal who “will turn Wyoming blue.”

Multiple leaders of the Park County Republican Party have complained about Newsome’s voting record in recent years and party secretary Vince Vanata and his wife Jona, of Cody, contributed $100 to Webber.

Meanwhile, Newsome has fired back with criticism of Webber’s performance as Hot Springs County clerk and her relatively recent move to Park County.

Outside cash and endorsements

Susan Gore of Cheyenne — the founder of the Wyoming Liberty Group and a Gore-Tex heiress — gave $1,000 to Laursen and $1,500 to both French and Webber. That was among $31,450 that Gore doled out to 24 candidates this year.

Meanwhile, commodities trader Dan Brophy and his wife Carleen, of Jackson, gave $3,000 to French and Rodriguez-Williams and $1,500 to Laursen. The couple has contributed thousands of dollars to anti-establishment candidates in the past, according to reporting by WyoFile, and has sent $84,550 to 33 candidates this year.

However, other political action committees and big political spenders have come to the aid of the two lawmakers.

The True family of Casper — which owns a series of oil and gas companies, ranches and associated businesses — has been Newsome’s biggest backer. A Tribune analysis of Newsome’s campaign finance report showed $8,350 worth of contributions indirectly or directly tied to the Trues.

Wyoming Hope, a political action committee chaired by Diemer True, has contributed $5,000 to Newsome’s re-election campaign, representing her largest donation. However, although Diemer True leads the group, Wyoming Hope records show the overwhelming majority of the funding ($150,000 of $155,500) has come from billionaire B. Wayne Hughes Jr. of Jackson; the businessman and philanthropist’s father founded the self-storage giant Public Storage. Wyoming Hope has sent $5,000 checks to 19 different legislative candidates (plus a $2,500 contribution to another), mostly backing incumbents facing challenges from the right.

“There has been a significant growth of third party, dark money and anonymous voices attacking solid, capable, conservative legislators who have the ability to tackle complex issues,” JoAnn True, Diemer’s niece and a Newsome donor, wrote in a statement to the Casper Star-Tribune. “We believe that it is critical that these legislators have the necessary resources to take their message directly to the people.”

The Wyoming Realtors Political Action Committee has also entered the fray. The realtor PAC gave Northrup and Newsome $1,000 apiece and purchased $4,120 and $2,370 worth of online ads supporting the two candidates, respectively.

Another independent group, Indy PAC, is backing Newsome as well, endorsing her on its website and placing Facebook ads to support her candidacy. The committee is led by Bruce Palmer of Lander, the former chairman of the Fremont County Democratic Party.

Indy PAC says it “seeks out and supports candidates who, while possibly affiliated with a political party, reject partisan or ideological groupthink.” On its website, www.bucktheparty.org, the group has endorsed a total of 11 Republicans and three Democrats.

The future of education

Meanwhile, the Wyoming Education Association is backing Northrup, Newsome and Larsen, Rep. Laursen’s challenger. The WEA’s political arm had issued its endorsements weeks before Larsen announced her write-in bid. However, the association went through “essentially what is an emergency endorsement process” and decided to support her, said Tate Mullen, the WEA’s government relations director.

One big reason, he said, was Larsen’s position on “how we address the economic crisis in the state” and revenue shortfalls. In a message to local WEA members, association leaders said calls for cuts to education funding and similar policy proposals are “irresponsible and devalue one of the state’s top economic investments: the children of Wyoming and their futures.”

Larsen has spoken about the need for Wyoming to move away from its reliance on the oil and gas industry and find new sources of revenue. While Northrup has stressed the continuing importance of Wyoming’s minerals industry, the state is “obviously going to be looking for some kind of revenue enhancement,” he said, “because I just do not see that our economy’s going to turn around in a year.”

That’s what the WEA sees as well.

“We’re trying to prioritize the idea that the state’s got to do something different,” Mullen said. “We’ve got to take a different approach.”

Rep. Laursen, however, sees the situation differently. He’s hoping that the minerals industry rebounds somewhat and, in the meantime, he wants to see cuts to state government — including to K-12 education. The representative paints that at the heart of the current fight for the Legislature.

Republican voters will offer their views in today’s election.