A 27-year-old Powell man remained hospitalized in Billings on Wednesday, after suffering severe injuries in a Sunday evening crash outside Ralston.

Tyler England was ejected from his truck in the … 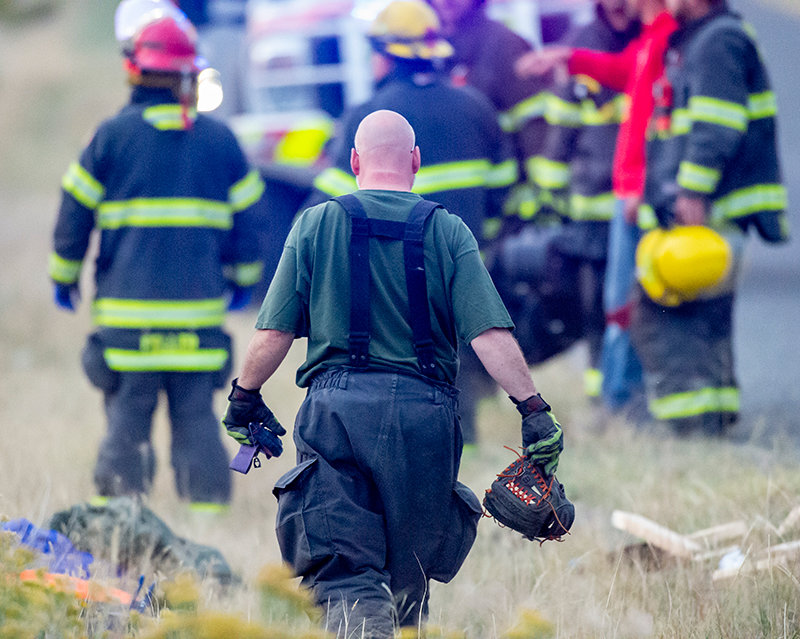 Powell firefighter Jim Dobbs carries a baseball glove that was tossed from a truck that crashed Sunday evening outside Ralston. The driver of the vehicle remained hospitalized in Billings on Wednesday.
Tribune photo by Mark Davis
Posted Thursday, September 23, 2021 8:15 am

A 27-year-old Powell man remained hospitalized in Billings on Wednesday, after suffering severe injuries in a Sunday evening crash outside Ralston.

Tyler England was ejected from his truck in the crash, suffering multiple broken bones and head injuries.

According to a friend of the family, England’s recovery is expected to be slow, taking weeks, if not months. The family asked friends to keep England in their prayers, adding that they are hopeful he will “rub dirt on it and move on.”

The crash occurred around 6:30 p.m. Sunday on Lane 11, just north of Ralston.

The Park County Sheriff’s Office said the driver had been traveling east “at an apparent fast rate of speed,” when his Chevrolet Silverado went off the westbound shoulder. The Silverado then reentered the roadway, but about 119 feet later, it left the road again in the eastbound lane, the sheriff’s office said.

The driver, identified by others as England, then overcorrected to his left and came back into the road.

“The vehicle entered a sideways slide, tripped, and began rolling,” said Charla Baugher Torczon, a spokeswoman for the sheriff’s office. “During the second revolution the driver was ejected from the vehicle. On the third revolution the vehicle struck a barbwire fence.”

The vehicle eventually came to rest right-side up, approximately 200 feet from the first trip.

“The seat belt did not appear in use during the crash and the front airbags did not deploy,” Torczon said.

First responders found England north of the road with what the sheriff’s office described as significant, life-threatening injuries. He was driven to Powell Valley Hospital before being flown to Billings Clinic for further treatment. Earlier in the day, England had competed in the 2021 Field of Dreams Softball Tournament, and participants in the charity event plan to donate a portion of the proceeds toward his medical expenses.